Cities Where Veterans Are Thriving Professionally 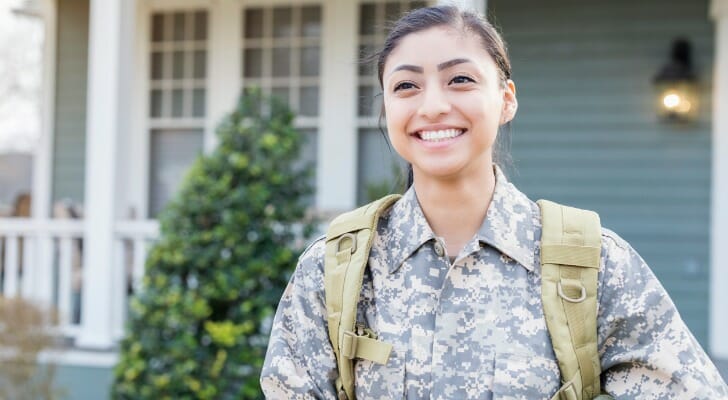 Veterans are an important part of American society in light of their many sacrifices for our safety. They also make up a significant portion of our population: 7.3% of the 251 million Americans 18 and older are vets. But these heroes can face a number of difficulties when reintegrating into civilian life, particularly when it comes to their finances. This makes it important that veterans place themselves in cities where they can thrive, save and plan for their future. Below we look at a slew of factors to find the cities where veterans are thriving professionally.

In order to discover where veterans are faring the best, we examined data on six different metrics. Specifically, we looked at the percent of residents who are veterans, veteran unemployment rate, veteran labor force participation rate, veteran poverty rate, median veteran income and veteran income as a percent of local rent costs. Check out our data and methodology below for more information about where we got our data and how we put it together to create our final rankings. 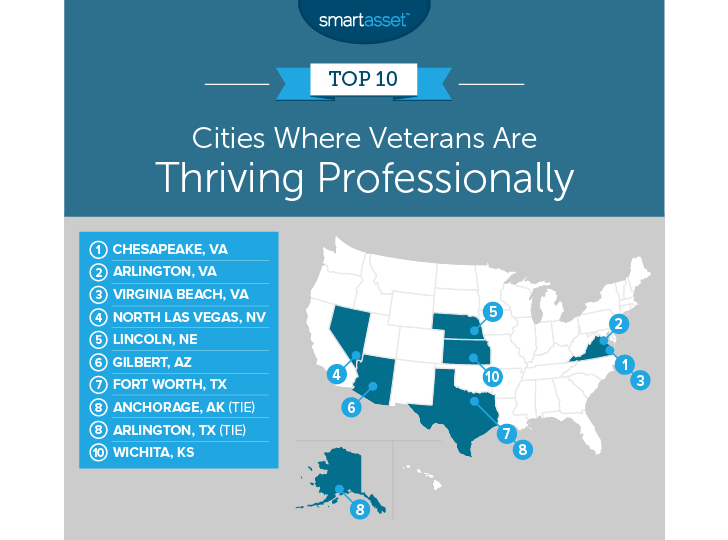 Chesapeake takes the top spot. Veterans here are, for the most part, doing quite well economically. Census Bureau data shows that Chesapeake veterans have an unemployment rate of 2%, and 83.2% are involved in the labor market. Thanks to high incomes – $56,907 per year for the average veteran – veterans here are also mostly above the poverty line. To boot, Chesapeake ranks no worse than 14th in any of the categories.

Arlington does not have quite as many veterans as nearby Chesapeake. Just over 7.1% of residents here are veterans. But the ones who do end up in Arlington tend to thrive. The average veteran here earns $95,838 per year, the most in our study. That leaves veterans in Arlington in a great position to save up or invest with their financial advisor. Rental costs on average are equal to only 23.5% of the average Arlington veteran’s income.

Up in fourth is the first non-Virginia city: North Las Vegas. This is another city full of veterans. More than 9% of the residents have served this country in uniform. The veteran population here has also made itself an important part of the economy. Our data shows that about 87% of veterans in North Las Vegas are in the labor force. Another positive: Only 3.6% of veterans are below the poverty line. In both of those metrics, North Las Vegas ranks sixth. If there is some room for improvement, it is in the veteran unemployment rate. Nearly 4% of veterans here are unemployed. That’s not a figure that should send alarm bells ringing, but it’s certainly one the city should monitor.

Up in fifth is one of the hardest-working cities in the country. Veterans here thrive thanks to the mutually beneficial booming labor market. Just about every veteran here is able to find steady employment. The Census Bureau estimates that fewer than 1% of veterans in Lincoln are unemployed. Veterans here, for the most part, don’t have to worry too much about housing costs. Median rent in Lincoln is equal to 22% of the average veteran’s income. Lincoln drops to fifth because of a high veteran poverty rate relative to the rest of our top 10.

Gilbert, one of the most livable cities in America, is also a place where veterans are excelling. For example, the average veteran in Gilbert earns nearly $53,000 per year. That is the eighth-highest average veteran income in our study. It is not just a few high-earning veterans driving up the statistics, either. Veterans here only have an unemployment rate of 0.8% and a labor force participation rate above 90%.

Fort Worth is another city where veterans are doing well. More than 83% of veterans here are in the labor force, a top-15 rate. At the same time, working veterans are compensated well. The average veteran here earns more than $50,000 per year. When comparing that to local rent costs, that $50,000 looks even better. The average veteran would need to spend only 24% of his or her income to cover rent costs. That should leave plenty over for other things like having fun or contributing to an IRA.

Alaska’s capital takes our ninth spot. This city has one of the highest populations of veterans in the country. Census Bureau data shows that veterans make up more than 12% of the Anchorage population. The veteran poverty rate in Anchorage is also low, while average Anchorage veteran incomes are high. In both of those metrics, Anchorage ranks in the top 10. To crack the top five, Anchorage will need to work on its veteran unemployment rate. Anchorage ranks 72nd for the veteran unemployment rate. That drags the city down in the rankings.

Wichita rounds out the list of places where veterans are thriving professionally. This city ranks in the top 35 in all metrics but one. That means veterans are doing pretty well across the board here. For example, only 2.5% of veterans are out of work. That’s a top-20 rate. In addition, four out of five veterans participate in the labor force. In that metric, Wichita ranks 35th. Wichita is also an affordable place. Despite the fact that veterans only earn an average of $37,600 per year, the typical veteran here should not struggle with rent. According to our data, the average rental property should cost only 25% of the average veteran’s income. 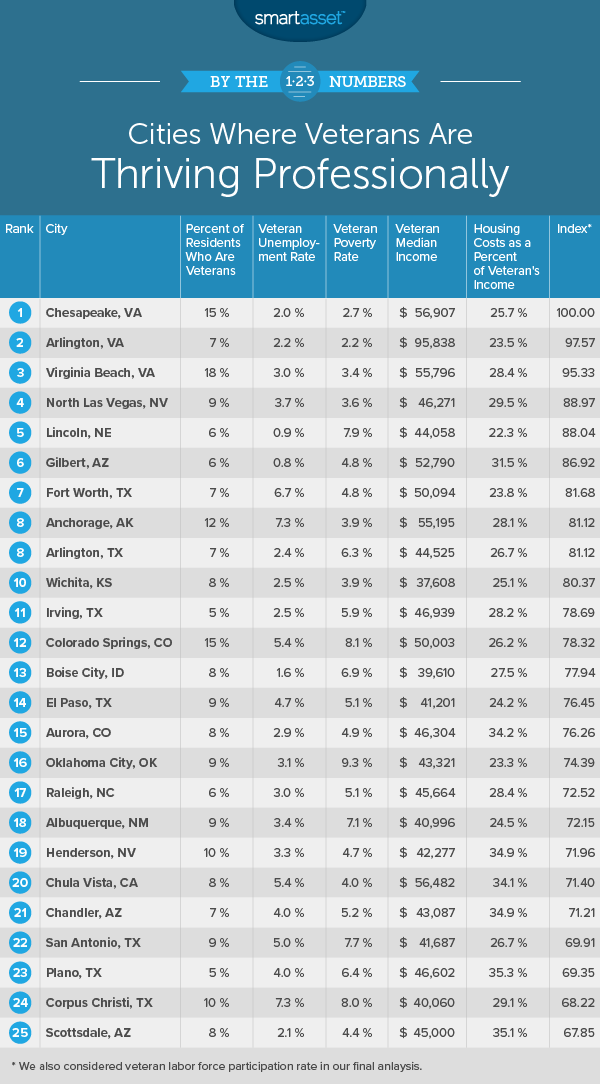 In order to rank the cities where veterans are thriving professionally, we looked at data on 99 cities. Specifically, we compared them over the following six metrics:

Data for all metrics came from the Census Bureau’s 2017 1-Year American Community Survey.