The Hardest-Working Cities in America – 2017 Edition 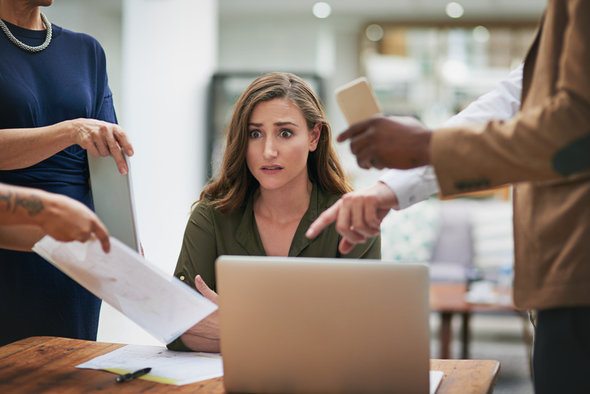 Americans love to tout their hard-working natures. In fact, among countries in the Organization for Economic Cooperation and Development (OECD), the average American ranks around 13th for most hours worked per year. Of course, people work hard for multiple reasons like securing a stable retirement or buying a home. But within America there are large differences between hours spent working. Below we look through the data to find the hardest-working cities in America in 2017.

Thinking about buying a home? Check out the latest mortgage rates.

In order to find the hardest-working cities in America, we looked at data on labor force participation rate, average hours worked per week and average weeks worked per year. Read our data and methodology section below.

This is SmartAsset’s second annual study of the hardest-working cities. Check out last year’s version here. 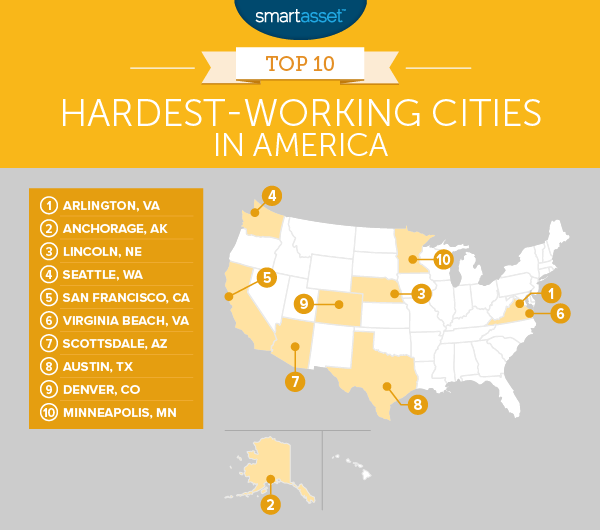 For the second year, Arlington is the hardest-working city in the country. It swept the study, ranking first in all three metrics. The average worker here puts in about 40.5 hours per week at work and works over 42 weeks per year.

The city also has the largest percent of its population in the workforce. Just under 88% of working-age residents in Arlington participate in the labor force. Overall, we estimate the average working-age resident works over 1,510 hours per year, the most in the country.

Anchorage is another second-time hardest-working city. On average resident heres put in less weeks working throughout the year than other workers. The average Anchorage employee works just shy of 37 weeks per year, which is only the 16th-most in the country.

However, when they are at work they are putting in long hours. According to our data, the average employee works over 41 hours per week. In total, we estimate the average Anchorage worker works 1,265 hours per year.

Lincoln ranks well due to the large number of working-age people in the work force. Our data shows that about 87% of people between the ages of 16 – 64 participate in the labor force. That is the second-highest rate in our study. Lincoln residents also tend to work most of the year. The average worker works about 38 weeks out of the year.

The Nebraska capital falls behind Anchorage and Arlington because, on average, work weeks here tend to be short. The average work week in Lincoln is only 37 hours long, the second-shortest in our top 10.

If you want to invest your hard-earned money from those work hours, consider looking for a financial advisor in the Lincoln area.

Residents in the Emerald City are hard at work. According to our data, they work the third-most weeks per year and have the fifth-highest labor force participation rate. However, the average work day here is not as long as it is in some other cities. The average Seattle employee works less than 40 hours per week.

In one sense, it could be argued that Seattle residents work a lot out of necessity. The area’s high cost of living and rising rents mean that working is a must for most residents.

San Francisco is a newcomer to the top 10. On average just about 82% of working age people in San Francisco are in the labor force. Those workers work a full load, typically just over 40 hours per week. However San Francisco workers do not work as many weeks per year as workers in a few of the cities ranked above it. The average worker here works about 37.9 weeks per year, which is fifth-overall in our top 10.

Like Seattle, working here is a requirement thanks to the high cost of living in San Francisco. Another factor worth mentioning for SF workers is the high income tax. California has one of the highest income tax rates in the country, meaning those hard-working San Franciscans keep less of their earnings.

Virginia Beach is the second Old Dominion city to crack the top 10. The city slipped one spot from last year’s ranking to come in sixth. Residents here work slightly less than those in San Francisco. On average, we see that the average Virginia Beach resident puts in about 40.3 hours per week and 37.8 weeks per year at work.

That means once you consider the labor force participation rate of 81.2%, the average Virginia Beach resident works about 1,237 hours per year.

Scottsdale is better known for its retiree population, but while large chunks of the city are enjoying retirement the rest are hard at work. This city has a labor force participation rate of 81.7%, 12th-highest in our study. The average worker here works 37 weeks out of the year and during those weeks spends about 40.4 hours on the job.

According to our data, the average Austin resident works about 1,226 hours per year. That is the eighth-most in the country. Perhaps one incentive for Austin residents to work hard is the fact that Texas has no income tax. When you work hard in Austin you get to keep a larger chunk of your earnings!

Denver is another newcomer to this ranking of the hardest-working cities. Last year Denver ranked 15th but thanks to upticks in hours worked per week, weeks worked per year and labor force participation rate, Denver moved up into the top 10. Some of our recent studies, like the best places for women in tech, have shown that Denver is a great place to work, so it isn’t too surprising to see that people are taking advantage of that.

Minneapolis climbed up from 18th in last year’s study into the top 10 this year. We estimate that the average Minneapolis working-age resident works about 1,225 hours per year. Minneapolis’ highest scores comes in average weeks worked per year and average hours worked per week. In both those metrics, Minneapolis has the 11th-best score. 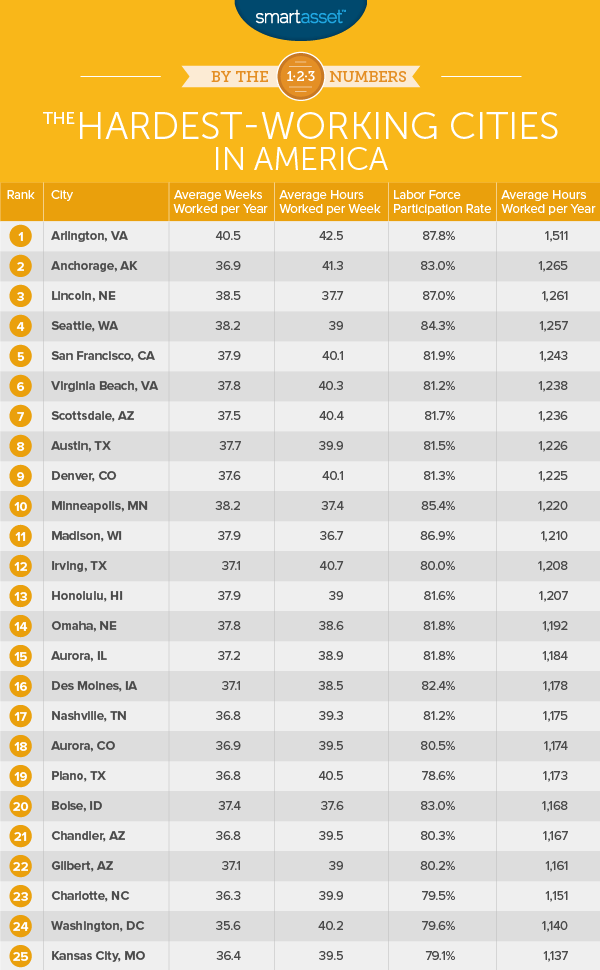 In order to rank the hardest-working cities in America, we looked at data on 118 cities with a population over 200,000. We compared these cities across the following three metrics:

Many people who have full-time employment still find themselves living paycheck to paycheck and struggling to save money for, say, retirement. If you find yourself in this situation, it may be worth it explore ways to earn additional money, whether that’s taking on a side hustle or just making money in an unorthodox way.

One way to earn extra money if you already own your home is to rent out one or more of the rooms. While living with someone else may not sound great, it can mean putting extra money away into your 401(k) or maybe even retiring early. Another option is to rent out a room on Airbnb or even the entire home when you’re out of town. If you live in an especially popular neighborhood, you can pocket quite a bit. In a past study we found that Houston residents could actually pay their entire monthly rent just by renting out a room on Airbnb.

If you find yourself with tons of time and not a lot of work options, getting in on the gig economy can be a good option. You could become an Uber or Lyft driver, or you could decide to do odd jobs on TaskRabbit.

Another option is to stick an advertisement on your car. Certain companies like Carvertise will pay you to place ads on your car. While using your car as a rolling advertisement won’t mean you can retire right away, it will help you put away a little into your savings account.