The True Cost of Living in Dallas 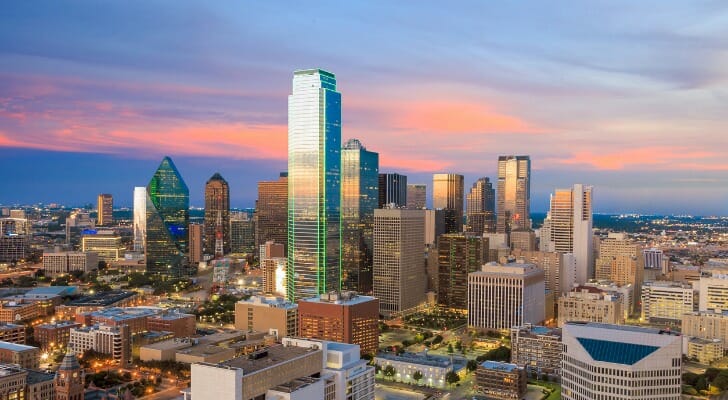 When you think of Dallas, perhaps you think of Dallas Cowboys football, or maybe you’re reminded of the soap opera that shares its name, which ran for 14 seasons. If you’re thinking of moving to Dallas, you should know the details on its cost of living, which encompasses everything from housing prices to utility bills. As moving to a new city and buying a home can have a big impact on your finances, you might consider working with a financial advisor to guide you.

If you’re considering a move to Dallas, it’s a good idea to get acquainted with home prices in the area. Even if you don’t have enough saved up for a down payment now, homeownership could be something you shoot for down the road. If you want to build a plan to reach that point, try talking with a financial advisor.

According to the latest U.S. Census, 41.3% of Dallas residents own the home where they reside. Possibly as a result of this, the median home price is $405,000, which is much more affordable than Austin’s $578,000 median. Even still, the Dallas housing market has seen a total appreciation rate of 6.2% in the last year.

On the fence when it comes to renting or buying? The average rent in the Dallas area is $1,568 per month while the national average is $1,706. One-bedroom apartments carry an $1,517 median rent, while two bedrooms sit at a $2,050 median rent. These rents have gone up quite substantially over the past two to three years.

The average utility bill in Dallas for a 915-square-foot apartment is $160.71. That’s for a basic package of electricity, heating, water and garbage. As a reference, this estimation comes in at about $11 less than the national average ($171.67).

For a major city, food in Dallas is surprisingly affordable. the recommended minimum amount of money for food per person in Dallas is $9.34 a day, or $289.61 a month. That assumes that you’re buying the bare minimum and only shopping at the grocery store, though.

If you want a meal out, expect to pay around $13 for a meal at an inexpensive restaurant. A three-course meal for two at a mid-range restaurant in Dallas carries an average price of about $50.

MIT’s living wage calculator further illustrates what you might spend annually on food in Dallas County, where Dallas is located. For single adults with no children, their living wage would be $24,356. Of that, about $2,994, or 12.3%, goes to food.

Many Dallas residents drive to get around rather than take public transit. However, the city offers the Dallas Area Rapid Transit (DART) for those who are car-free. Monthly DART passes are $96 for local service and $192 for regional service. Day passes are $6 for local and $12 for regional.

The good news is that you won’t owe any state or local income taxes if you move to Dallas. You will, however, pay a sales tax rate of 8.25%. That’s a combination of the state sales tax rate of 6.25% and the Dallas county/city rate of 2%.

There are few cities across the U.S. that have as many sports fans as Dallas. To catch a Cowboys game, the average ticket price is $221 for the 2022 season. The Cowboys’ AT&T Stadium is home to many season ticket holders, which means there’s a hot secondary market for tickets when season ticket-holders resell them. Prices on the secondary market can get even steeper, particularly later in the season.

If the NFL isn’t your thing, you can check out the Dallas Mavericks. The average ticket price to see the Mavericks play basketball is $59. That’s not exactly a cheap date, but it’s a lot less expensive than a trip to see the Cowboys.

As you can see, a move to Dallas can be an affordable shift in the cost of living for many people. With a big city atmosphere, the cost of living can be much lower than in comparably large cities throughout the country. Texas doesn’t have a state income tax and many businesses are moving to the state to benefit from favorable business laws. Only you’ll know whether a move is right for you after analyzing the potential cost of living that you’ll have.

Tips for a Move to Dallas