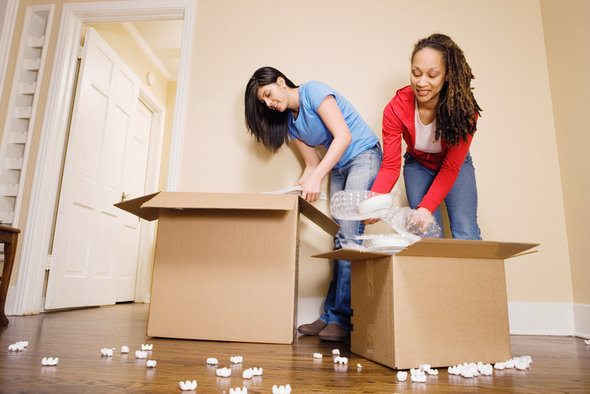 Tired of splurging on rent? Maybe it’s time to check out mortgage rates and buy.

This is SmartAsset’s third annual study on how much a roommate saves you. Read the 2016 version here. 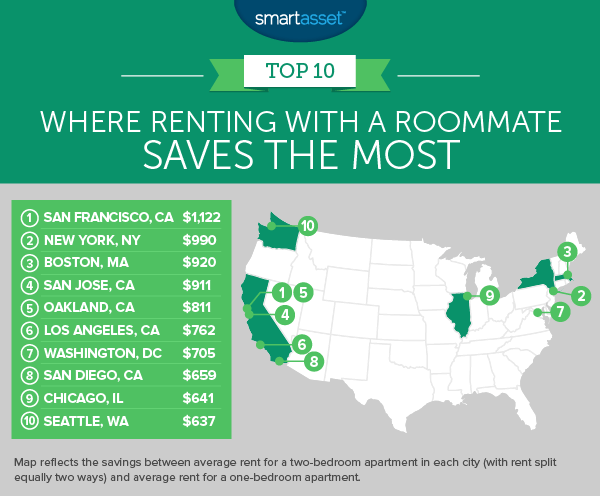 New York City properties are notoriously expensive. If you are living in New York and want to rent a one-bedroom apartment, you are looking at paying $2,728 per month. Our data shows that by moving to a two-bedroom and living with someone you could save just under $1,000 per month.

Finding a roommate in New York shouldn’t be too difficult either. There are over 8 million people living in the Big Apple and there are plenty of websites to find roommates.

Beantown moves up from fourth last year to third this year. We estimate that by living with a roommate you can save about $920 per month. By saving $920 per month you can get a head start on your financial goals, like saving up for a down payment on your home or setting up a fund for retirement.

San Jose is certainly a pricey place to live. For example, if a couple wanted to retire early in San Jose, we estimate they would need to earn over $114,630 per year in retirement.

One great way to get a head start on that retirement fund is to cut back on rent costs today. We estimate that the average person who moves from renting a one-bedroom to renting a two-bedroom with a roommate could save over $900 per month.

Another California city in the Bay Area takes fifth. Despite being more affordable than some other places, Oakland renters still leave a ton of money on the table by living alone.

The City of Angels takes sixth. In general, living the L.A. lifestyle comes at a price. Just renting a one-bedroom apartment alone will set you back $2,241 per month, on average. If that is too high a price to pay for solitude, consider a roommate.

We estimate that your monthly rent costs would drop from $2,241 per month to $1,479 by moving into the average two-bedroom apartment with a friend. That’s a saving of $762 per month.

Washington, D.C., while having a high cost of living, isn’t as unaffordable as other cities in our top 10. The average one-bedroom here costs just over $2,000 per month. That would mean spending over $24,000 per year to keep a roof over your head while living alone.

However just because rents in D.C. are lower than other big cities does not mean renting there is affordable. Census Bureau data shows that in 2015, the average resident in the nation’s capital earned $41,000. That would mean the average resident would need to spend just under 60% of income on rent for the average one-bedroom apartment. However by moving into a two-bedroom with a roommate they would only need to spend $1,376, for a monthly saving of $705.

San Diego is another place in California with sky-high rental prices. The average one-bedroom costs over $1,700 per month. We estimate that by switching from living alone to living with a roommate, you could save over $650 per month. That is an extra $650 you can put toward you 401(k) or maybe just into your savings account.

Chicago is the only Midwestern city in our top 10. Rent prices here, relative to some other cities, are not out of control, but there’s still plenty of money to be saved by being smart. The average one-bedroom in Chi-Town costs $1,718 per month, while the average two-bedroom costs $2,154 per month. That means by switching from living alone in a one-bedroom to living in a two-bedroom with a roommate, you can save about $641.

Our list ends in Seattle, which barely edged out Long Beach, California. We estimate that by living with a roommate in the Emerald City you can save about $637 on average. That money comes in handy when you consider how pricey Seattle is becoming. Plus, if you want to explore each of Seattle’s 1,660 or so coffee shops you will need to save money in other areas.

In order to find the cities where a roommate saves you the most, we looked at data on 50 U.S. cities. We compared them across the following two metrics:

Tips for Living With a Roommate

While living with a roommate is great on the wallet it can cause some problems. To keep the living situation drama-free and the costs low here are some tips.

Be sure to choose your roommate carefully. Since you and your roommate will be sharing the cost of the apartment you will want to be sure they can handle their half of the rent. That means making financial stability a priority when you are choosing your roommate.

It’s also a good idea to make sure all parties’ names are on the lease. If only your name is on the lease, it may put you on the hook if your roommate cannot cover rent.

You and your roommate may want to consider tracking all shared expenses, for example utilities, internet or even food. By keeping track of who is spending what you can stay organized on payments and avoid awkward financial conflicts.

Data analysis for the article was done by Nick Wallace.