What Is the True Cost of Living in New York City? 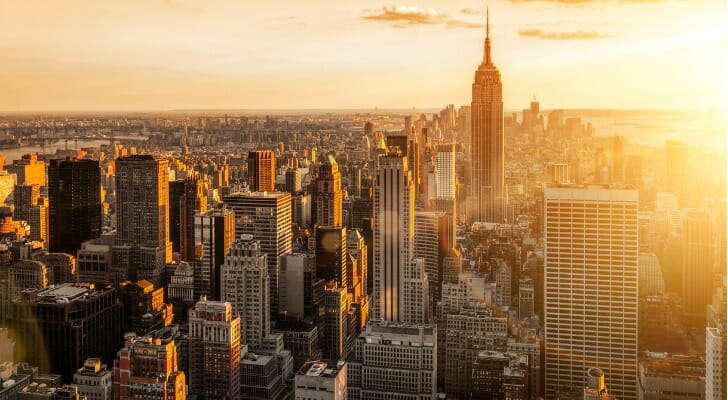 It’s no secret that living in New York City is expensive. Before the average NYC resident’s paycheck even reaches the bank, they’re shelling out some of the highest income taxes in the country, with high taxes on both the state and local level. Beyond that, prospective residents face some of the least affordable housing in the country. That’s particularly true for NYC residents who want to be in the heart of it all and live in Manhattan.

Cost of Renting in New York

The high cost of living in NYC starts with its crazy housing market. According to Apartment List, the median rent for a two-bedroom apartment is $6,191 in New York City. Studio and one-bedroom apartments come in at $3,295 and $4,331 a month, respectively.

Each of these rents are far more expensive than not only the U.S. median, but most of the world’s large cities. As of March 2022, the national median rent for studios, one bedrooms and two bedrooms was $1,101, $1,139 and $1,306, respectively. That’s a $2,194 difference for a studio apartment, a $3,192 deviation for a one-bedroom apartment and, lastly, a $4,885 split for a two-bedroom apartment. Needless to say, New York is breath-takingly expensive to rent in. The following prices are from ApartmentList.com.

Cost of Buying a House in New York City

The classic dilemma of “buy vs. rent” always comes up regardless of where you’re living. In the case of New York City, a single-family home in the New York metro area has a median sales price of $403,900, based on 2018 data from the National Association of Realtors. While this might sound favorable, remember that the metro area consists of not only New York City proper, but also the nearby areas that surround it. Buying in the city itself can be much pricier, especially if you want to live near the city center; it’s not unheard of to spend more than $1 million for a one-bedroom apartment in Manhattan. Mortgage rates, however, tend to mirror those available in other major cities. (If you want to know how much house you can afford, stop by SmartAsset’s home affordability calculator.)

Whether you rent or buy, you’ll have to cover the cost of utilities. According to Numbeo.com data, in March 2022 the average basic utilities package for a 915 square-foot place in New York costs $170.01. That includes heating, electricity, water and garbage and is about what the U.S. average is for a month of basic utilities ($170.09).

After housing, the No. 1 expense for most Americans is transportation. For car owners, that’s the cost of buying, maintaining, insuring, fueling and storing their vehicle. If you use public transit, you’ll be on the hook for a transit pass, and possibly parking, if you need to drive to pick up the bus or train.

In addition to parking, the price of gas in New York is often higher than the national average. GasBuddy data from March 2022 shows gasoline ranging from a low of $4.09 per gallon in Staten Island to a high of $5.59 per gallon in Manhattan. According to AAA, the average U.S. retail price for regular gasolin was $4.25 at the end of March 2022. Car insurance in New York City is $1,582; nationally the average is about $1,483, according to thezebra.com.

If you’re okay with giving up your car, New York’s public transit system is one of the best – although perhaps not the safest – in the country. But like everything else in the Big Apple, it’s one of the most expensive. A monthly transit pass in New York costs $127 per month. For a direct comparison, consider this: monthly transit passes in Los Angeles and Chicago cost $100 and $105, respectively.

According to Numbeo.com data from March 2022, groceries in New York City usually cost about $486.71 a month, per person. For the U.S. as a whole, the average is $348.34. Of course, New York City is famed for its restaurant scene, and those who choose to dine out regularly will see their food budget soar.

There are a number of reasons that contribute to why food and produce is so expensive in New York City. Perhaps the strongest consideration is that the companies that sell the food are forced to pay much more for commercial leases and workers’ wages than in other parts of the country. Delivering food can also be especially difficult in Manhattan, as it’s a densely populated island.

Cost of Entertainment in New York 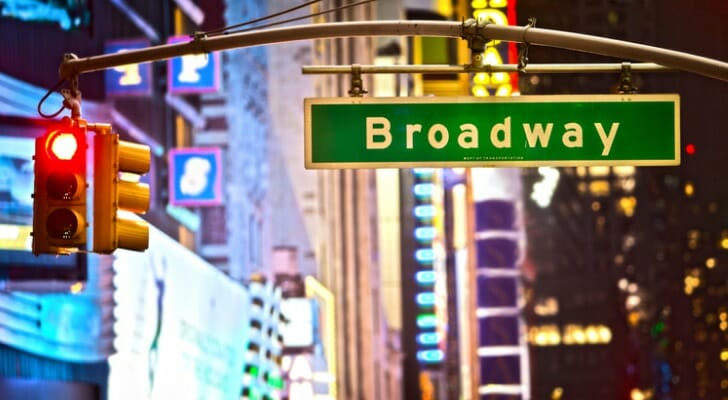 If you have any money left after paying for housing, transportation and food, then you may want to try and enjoy yourself. Well, it’s going to cost you. For movie buffs, the average price of admission to a movie in Midtown is $15.25, according to ValuePenguin.

New York is famous for its sports teams, too. If you were looking to catch a Brooklyn Nets or New York Knicks game, your tickets in 2022 would have ranged from $68 to nearly $500. Baseball fans can check out both Yankees and Mets games. The cost during the 2022 season of a ticket to Yankee Stadium on the Main Level ranges from $50 to $150.

Broadway show tickets range from $20 to $145. Meanwhile, New Yorkers do have at least one option for cheap entertainment. On a typical weekend night, subway platforms across the city become stages for all kinds of musical performances. Whether you like classical, jazz, hip hop or the blues, there’s bound to be something you enjoy.

Tips for Your Move to New York City