What Is the Cost of Living in Los Angeles? 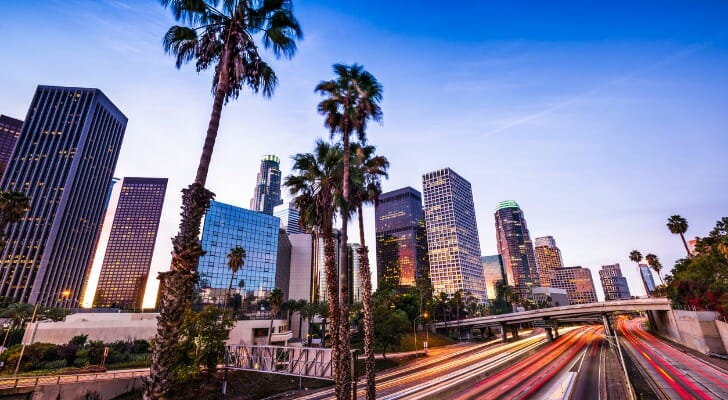 From the mansions of Beverly Hills to the hipster bars of Silver Lake, Los Angeles charms visitors to its palm tree-lined streets. But if you’re pondering becoming a resident, you’ll want to get a handle on the true cost of living in the City of Angels. First and foremost, LA’s housing costs are fairly high. However, the prices here aren’t quite as high as other California cities, namely San Diego and San Francisco.

From 2000 to 2018, homes in Los Angeles have appreciated in value by 207.36%, according to NeighborhoodScout. Because of this, Los Angeles has developed into one of the strongest housing markets in the country.

A 2018 report by the National Association of Realtors states that the median sales price for a single-family home in the LA metro area is $576,100. This is better than New York City, which boasts a $403,900 median. But other California metro areas beat out LA, like San Francisco and San Diego. In San Fran, the median home sales price is $952,400, while San Diego sits at $626,000.

Buying a home and getting a mortgage is a major decision. For help figuring out what types of homes are within your financial means, consider speaking with a financial advisor. 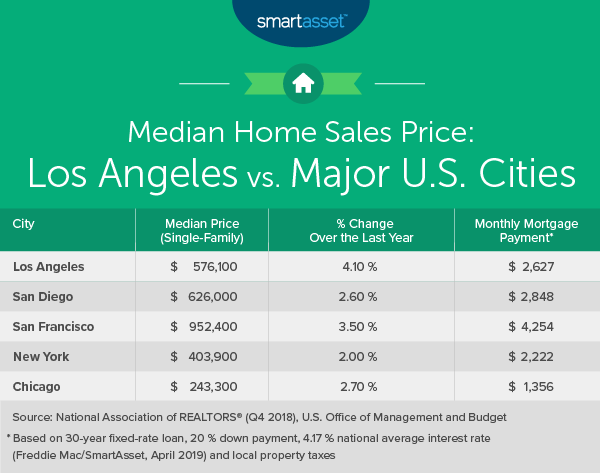 In general, rentals in Los Angeles are fairly expensive. Despite this, LA is one of the few cities across the U.S. that houses more renters than homeowners. More specifically, only 36% of LA residents own a home, while 64% pay rent.

According to March 2019 data from Apartment List, the median rents for studio, one bedroom, two bedroom and three bedroom apartments in LA are all above the national medians. Here’s a detailed breakdown: 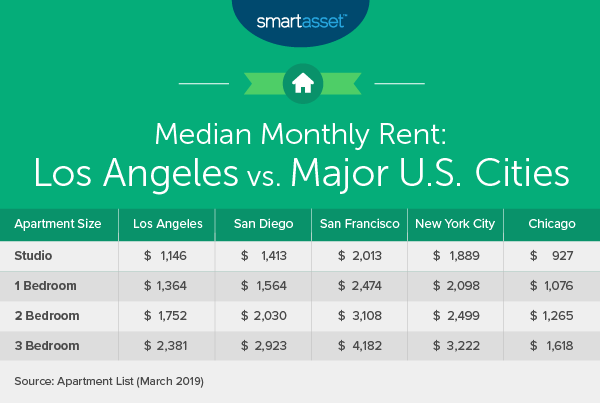 Los Angelenos pay slightly less for internet than New Yorkers do. A month’s worth of internet will cost you $59.65 in LA compared to $62.77 in the Big Apple, according to Numbeo.com.

Getting Around LA: Transportation Costs

Los Angeles has long been known for its immovable traffic. Unfortunately, LA gas prices make being stuck in traffic all the more painful. May 2019 data from GasBuddy indicates that the average price of a gallon of gas in LA is approximately $4.09. Compare this to the $2.88 national average.

To avoid driving altogether, you’ll have to rely on LA’s public transportation. The base fare for a single ride on the LA Metro is $1.75, with reduced rates available to seniors, disabled residents and K-12 students. A 30-day pass on the LA Metro will set you back $100. That’s $16.50 cheaper than a similar pass for New York City’s subway system.

The Cost of Food in Los Angeles

The food scene in LA is about as comprehensive as any other place in the U.S. From food truck tacos to upscale farm-to-table produce, LA is a paradise for foodies. According to a Numbeo.com report from May 2019, the average cost of a two-person, three-course meal at a mid-range restaurant is $60. That’s $10 above the national average.

Even if you buy groceries and cook yourself, prices in LA are still well above average. Numbeo.com’s 2019 report shows that a gallon of milk and a dozen eggs in a Los Angeles grocery store go for $4.53 and $3.28 each. The national averages for these items are much more modest at $3.10 and $2.27, respectively.

Healthcare prices throughout California are some of the highest in the nation, and Los Angeles is no exception. A 2016 study by the Health Care Cost Institute sets the price of healthcare in the LA metro area at 22% above the national median.

On the plus side, San Jose and San Francisco metro area residents experience much more exorbitant prices. Healthcare in San Francisco costs 64% more than the national median, whereas San Jose prices are an astounding 82% above the countrywide mark. 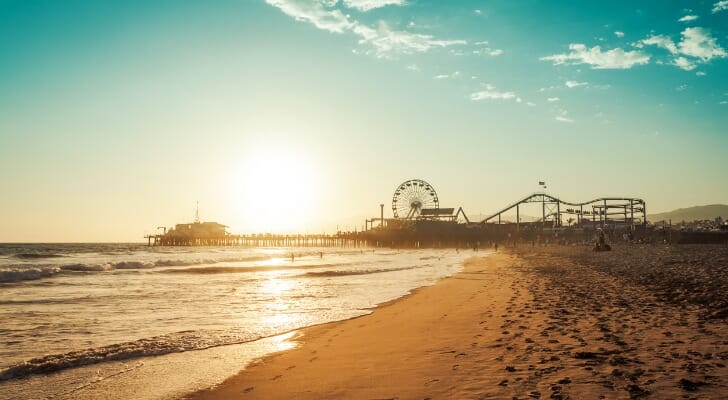 It probably doesn’t come as a surprise that movie ticket prices in LA tend to be higher than the national average. A movie ticket that would cost $12 in an average U.S. city will run you $15 in LA, according to Numbeo.com.

Even normal clothes cost more in the City of Angels. Numbeo.com reports that a single pair of jeans in LA costs $49.13, while a pair of men’s leather business shoes goes for $107.20, on average. So in LA, jeans cost $6.02 more than the national average and business shoes cost $12.92 more.

Don’t forget to take sales tax into account. The baseline sales tax in Los Angeles county is 9.5%, but some places, including Santa Monica and Culver City, have higher rates.

Next Steps for Your Move to Los Angeles