How Early Can You Retire in the 15 Largest Cities? 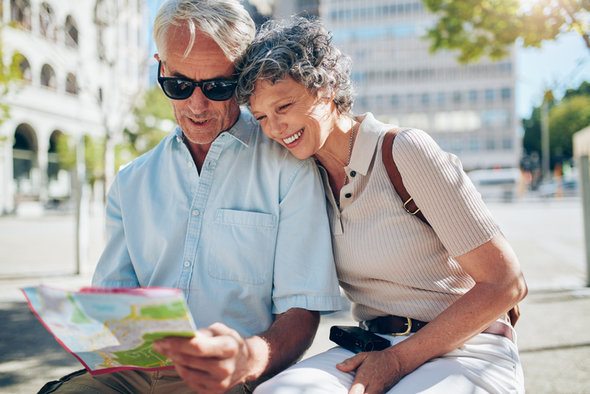 Does retirement sometimes seem like a pipe dream? It’s true that incomes and jobs aren’t what they once were. Plus, planning for something 20, 30 or 40 years in the future can be difficult. But with careful planning and financial management, it’s possible to save enough to enjoy retirement. Depending on where you hope to live, early retirement may even be possible. We looked at data on the 15 largest cities to help you figure out how early can you retire?

We looked at data on incomes and expenses in each city in order to determine the earliest someone could retire in the 15 largest cities. We plugged those numbers into SmartAsset’s retirement calculator which gave us the earliest age a person would have enough money saved to retire in each city.

Specifically, we gathered median household income data for all 15 cities from the U.S. Census Bureau’s 2015 5-Year American Community Survey. We then used that data to estimate monthly savings and retirement expenses.

We made several assumptions for this study. In order to find monthly savings, we assumed that households would save 15% of the median household income. To find the annual retirement expenses, we assumed that households would spend 25% less in retirement than they did in non-retirement. (We calculated non-retirement expenses to be all income not put toward savings i.e. 85% of income.) We assumed that residents begin saving at the age of 30, are married, had no previous money saved up, place all savings into a 401(k) and take Social Security benefits at age 67. We also assumed a 4% return on savings and an annual inflation rate of 2%. Furthermore, we assumed households had no IRA accounts and no pension.

Finally we plugged all this data into our retirement calculator to find the earliest age at which prospective retirees would have enough money saved (combined with Social Security) to meet their expenses until the age of 95. 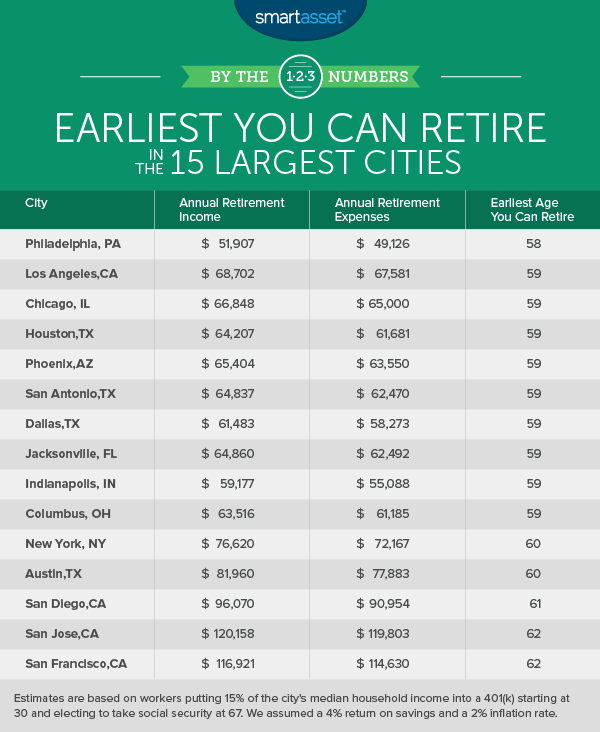 Where You Can Retire at 58:

How does retiring at 58 sound? If you like that idea, you may be jealous of Philadelphia residents. Our data shows that 30-year old Philly residents who make the city’s median household income (about $38,250) and save 15% of their salary, may be able to retire at 58. By that time, they could have enough saved for an annual retirement income of just under $52,000. That’s more than enough to cover estimated annual retirement expenses of $49,126, according to our calculator. One benefit to being in Philadelphia is that Pennsylvania is a low-tax jurisdiction for retirees. The average Pennsylvania retiree has a tax burden of 0.5% compared to the national average of 1.9%.

Where You Can Retire at 59:

If you love Los Angeles and have already decided it’s where you want to spend the rest of your life, we have some good news. It may be possible to retire in Los Angeles at a spry 59 if you earn the city’s median household income of $50,205. For someone at that income level, our calculator recommends about $67,500 per year to cover living costs in retirement. Using the savings scenario we outlined earlier, it’s possible to save $505,617 by the age of 59. That’s enough for a retirement income of $68,702 per year.

Chicago is another city where it’s possible to retire early. We estimate that annual retirement costs for the average Chicago household are $65,000. That means Chicago households would need to save $452,000 on average to retire. Our data shows that the typical Chicagoan may be able retire by 59, if they start putting 15% of their income into a 401(k) starting at 30. Over the next 29 years, they may have a total of $488,668 saved. That works out to $66,848 per year (including Social Security benefits starting at 67).

We estimate average retirement expenses will cost about $61,681 per year in Houston. Houston households who make the median income and put about $577 per month into a 401(k) may be able to retire at 59. If you do manage this feat, your annual income in retirement should be around $64,207 (including Social Security starting at age 67).

The Phoenix area is already one of the places where retirees are moving. But just how early can you retire in the Valley of the Sun? It may be possible to hang up your work clothes in Phoenix at the age of 59 by following the specifications we laid out above. Our calculator estimates retirement expenses of $63,550 per year in Phoenix. Phoenix households who make the median income of $47,326 and save 15% of income starting at age 30, may be able to save $476,623 by age 59.

It may be possible to retire in San Antonio at the age 59 if you earn the $46,744 median household income. San Antonio residents who start putting $584 per month into a 401(k) at age 30 may be able to save $470,761 for retirement. Together with Social Security benefits, that’s enough to cover the estimated annual retirement expenses of $62,470. Plus, San Antonio retirees benefit from being in Texas, a low-tax jurisdiction for retirees.

Want to live our your golden years in Dallas? You may be able to retire by the age of 59 with an annual retirement income of $61,483. That’s actually higher than estimated annual retirement expenses of $58,273. Our calculator shows that scenario may be possible for households earning $43,781 and putting 15% in a 401(k) starting at age 30.

Indianapolis has the second lowest needed retirement income in our study. Our calculator estimates that figure at just $55,088 per year. This means that retiring early may be possible for many people here. It may be possible to retire at 59, if you start saving 15% of the city’s median income at age 30 and start take Social Security at 67. According to our data, households that do this may have $59,177 per year in retirement income. (Around $37,492 of that will come from Social Security and $21,685 from 401(k) savings.) Keep in mind that Indiana’s a high-tax jurisdiction for retirees. The average tax rate on retirees is 2% here.

Columbus is the last large city on our list where it is possible to retire at 59 if you earn the median household income. We estimate that retirement expenses will cost around $61,185 per year. Columbus residents making the median income of $45,659 and putting 15% in a 401(k) from age 30 can reach an annual retirement income of $63,516. That total includes Social Security benefits starting at age 67.

Where You Can Retire at 60:

New York may not have the pleasant weather that Florida does, but it has plenty to offer to potential retirees. Of course, New York City is exorbitantly expensive, so retiring here may sound impossible. But if you’re careful, it is doable. We estimate that to retire at age 60 in New York, the average person would need $72,167 per year to cover expenses. Using our savings scenario outlined above, New York households making $53,373 may have enough saved to have an annual retirement income of $76,620 (including Social Security) by 60.

Austin benefits from being in Texas where retiree income is not taxed. Our retirement calculator estimates that retirement expenses will be about $77,883 per year in Austin on average. The median household income in the Texas capital is $57,689. Based on that salary, it’s possible to have saved enough to retire by age 60 if you start putting 15% into a 401(k) at age 30.

Where You Can Retire at 61:

According to our study, 61 is the earliest possible retirement age for the average San Diego resident. California is a high tax state, meaning it’s harder to retire early here than in some other states. Our retirement calculator estimates that the marginal tax rate will be about 17% for the average San Diegan retiree. We estimate that retirement in San Diego will cost about $90,954 in annual expenses. By age 61 a retiree here, assuming they fit all the specifics outlined in the methodology, may have saved enough for an annual income of $96,070.

Where You Can Retire at 62:

In order to retire in San Jose, we estimate that the average household will need an annual retirement income of about $119,803. Sounds like a lot? Fortunately San Jose residents are some of the highest-paid in the country. In order to cover those retirement expenses, our calculator says residents will need to put about $1,058 per month into a 401(k) starting at age 30. By age 62, using those 401(k) savings and Social Security, the average San Jose resident may have enough to retire with an annual income of $120,184.

How early can you retire in San Francisco? Well, similar to San Jose residents, San Francisco residents are well-paid. But they both face high costs of living. Because of that, our calculator estimates that to live a comfortable retirement, SF households will need about $114,630 per year. Residents who make the median household income of $81,294 and fit the specifics laid out in the methodology, may have enough saved to support spending $116,921 per year in retirement.