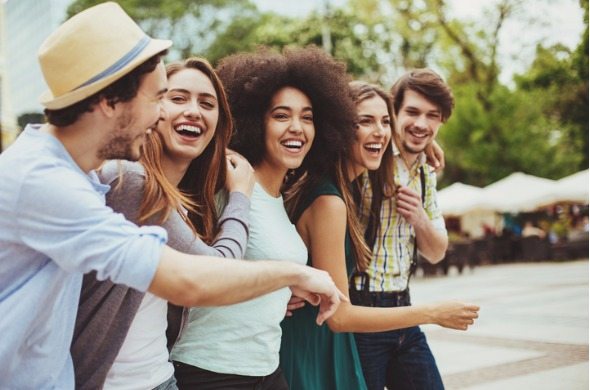 What makes a city a great place to live? You’ll probably get a different answer from every person you ask. But there are some factors that the majority of people would agree makes a city livable. For example you probably want your city to be affordable, to have access to jobs and to be safe. Below SmartAsset ranks the most livable cities in the United States based on cost of living, economic indicators and more.

In order to find the most livable cities in America, we looked at data on six metrics. We looked at unemployment rates, income after housing costs, population density, property and violent crime rates and walkability. Check out our data and methodology section below to see where we got our data and how we put it together.

This is the second annual study of the most livable cities in the U.S. Check out last year’s version here. 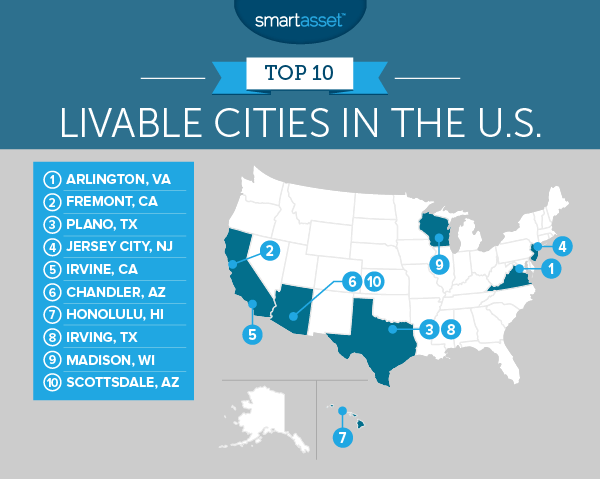 Arlington, Virginia is the most livable city in the United States in 2017. In order to live comfortably in any city you will need a steady income stream. Arlington offers its residents just that. The unemployment rate is only 2.8%. Plus, after paying for housing costs, the average resident will have about $40,000 in income.

That comfortable gap between average income and housing costs means there should be plenty left over for Arlington residents to invest in their 401(k)s or save for retirement.

Fremont jumped seven spots from last year’s ranking to be the second-most livable city in the country. If you’re looking for a safe place to live, Fremont is a great option. This city has top 10 scores in both property crime rate and violent crime rate.

But Fremont is more than a safe place to live. It offers residents plenty of access to opportunity. The average resident here has about $23,700 after paying for housing. It scores in the top 5 for that metric. Plus, only 3.2% of residents are unemployed. The downside to living in Fremont is that you will likely need a car to get around. This city has the lowest population density in our top 10 and a walkability score of only 44.

For the second consecutive year, Plano ranked third. The Texas city is an economic juggernaut in our top 10. Residents earn $45,000 on average and median housing costs $17,000 per year. This means the average Plano resident has around $28,000 after housing costs. Plano ranks second in that metric. For Plano residents looking for advice on how to invest their money, these are the top 10 Plano financial advisor firms.

In terms of employment, there seems to be plenty of jobs. Only 4.1% of residents are unable to find work. Another plus for all those hard workers in Plano: Texas has no state income tax.

Last year’s winner, Jersey City, dropped to fourth in 2017. Jersey City is a walkable city with good public transportation links to New York City and other parts of New Jersey.

The link to New York is a double-edged sword, however. It means good access to jobs but raises the cost of living. The average Jersey City resident should have about $19,000 left after paying for housing – a top-20 rate. Overall Jersey City has a walkability score of 87, the second-highest in our study.

According to our data, Irvine is even safer than Fremont. This southern California city has the lowest violent crime rate in our study and the second-lowest property crime rate. So, if safety is your prime concern and you’re considering a move to a new city, put Irvine on your radar.

The first of two Arizona cities to crack our top 10 list, Chandler has four top 15 scores. The average resident has about $22,000 in income after paying for housing costs and only 3.8% of people are unemployed. This city also is a safe one, ranking ninth in lowest violent crime rate.

Chandler took its biggest hit when it comes to walkability. This is definitely a city where you’ll need a car to get around easily.

It is no surprise that Honolulu ranks on this study. The capital of the last state to join the union comes with some of the best surf in the world, breath-taking beaches and top-notch hiking trails. But Honolulu has more to offer than stunning natural wonders. It scored well in safety and job opportunity for starters. This city has the 11th-lowest violent crime rate in our study and an unemployment rate of only 4.1%.

Watch out though, living in paradise comes at a cost. Our data shows that after paying for housing, the average resident has $15,400 left, that’s a below-average score.

Located in the Dallas metro area, Irving is a bustling Texas city. It has top 10 scores in both unemployment rate and violent crime rate. Residents here also tend to do well when it comes to earning. After paying for housing, we estimate that Irving residents should have about $17,000. That should allow residents to get a head start on saving for retirement or a down payment on a house.

The only Midwest city on this top 10 list comes in ninth, down one spot from last year. Madison is a relatively walkable city, especially in the warmer months. The city also scores well in unemployment – only 3.8% of residents are unemployed. It ranks in the top 10 for that metric.

It’s also a safe city, with top 30 scores in both of our crime metrics.

Our list ends in Scottsdale, the second Phoenix metro area city to appear in our top 10. Scottsdale scores better than Chandler in a few metrics, including income after housing and unemployment rate. Scottsdale ranks third in both those metrics.

However, living in Scottsdale means being entirely dependent on having a car. Scottsdale has a walkability score of only 32, the lowest in our top 10 and a population density of only 2,200 people per square mile. 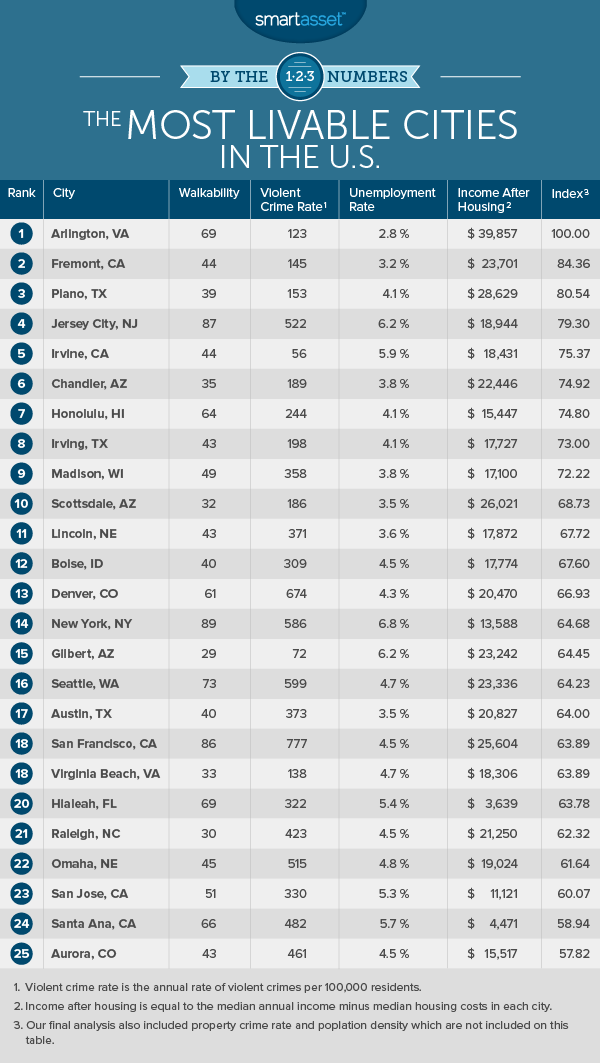 In order to find the most livable cities in the U.S., we analyzed data on the 100 largest cities. Specifically, we looked at data for the following six factors:

Note: Seven cities (Arlington, Scottsdale, Fort Worth, Glendale, Wichita, Toledo and Tucson) that were not included in last year’s study due to lack of data availability are included in this year’s study.

Tips for Saving on Housing

Housing costs are typically the largest part of one’s budget so there’s lots of room to save here.