The Safest Cities in America in 2016

People choose where to live based on a variety of factors. Although safety may not the number one concern for everyone, it is certainly a factor most people consider when deciding on a place to call home. People typically think of safety in terms of crime but other factors like bad air quality or the prevalence of reckless drivers also make for an unsafe environment. We looked at these and other factors to create a ranking of the safest cities in America for 2016.

This is SmartAsset’s second annual study of the safest cities in America. Read the 2015 version here.

To find the safest cities in the U.S., SmartAsset looked at data for the largest 200 cities across a number of different metrics like violent crime, property crime, air quality and motor vehicle accidents. We also considered the percentage of people commuting to work alone, drug use and excessive drinking. In order to understand where we got our data and how we used it, please read the full Data and Methodology below. 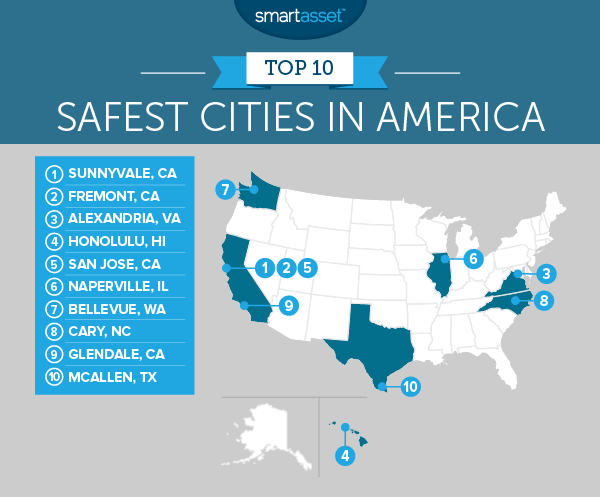 This D.C. suburb snagged the third spot on our top 10 list. One of the reasons it ranked so well is that its residents are among the least car-reliant in the country. A simple explanation for this is Alexandria’s proximity to D.C. and shared metro system mean that many residents do not drive to work alone. In fact, only 58.7% do. Another benefit of spending less time behind the wheel is the city’s low number of motor vehicle-related deaths. Alexandria’s vehicular mortality rate of 4.7 fatalities per 100,000 residents is the sixth best in the country.

The air in beautiful, tropical Honolulu is some of the best in the country. The ninth best to be precise, according to EPA data. Hawaii’s capital also has a relatively low violent crime rate of 243.8 per 100,000 residents. However data shows that 20.1% of the population engages in reckless drinking, which hurts its overall safety score.

We recently named San Jose one of the most livable cities in the U.S., so we weren’t surprised to see it pop up again in the discussion on the safest cities. According to FBI data, both violent and property crime rates are down in San Jose as compared to last year. The city is also tied with Sunnyvale for the second-lowest excessive drinking rate in the top 10.

Naperville is one of the newcomers to this year’s study. Data shows that the property crime rate fell from 1,431 crimes per 100,000 residents to 1,123 crimes per 100,00 residents since last year’s study. Its property crime rate is now second best in the country. Naperville also ranks second for lowest vehicular mortality rate and fourth-lowest for violent crime.

This Southern California city combines low violent and property crime rates with a low drug poisoning mortality rate to make for one of the safest living environments in the U.S. Like other places around Los Angeles the air quality is not very good in Glendale. The EPA gives them a 67 on the air quality index which is 170th in our data set.

Wondering what taxes are like in California? Read all about California income tax, sales tax and other taxes here.

This city near the Mexico border rounds out our top 10 of the safest cities in America. It has a population of 140,053 and a violent crime rate of only 108 per 100,000 residents. It also ranks well for drug poisoning mortality rate, percentage of population engaged in excessive drinking as well as air quality. McAllen scored in the top 20 in all these metrics. 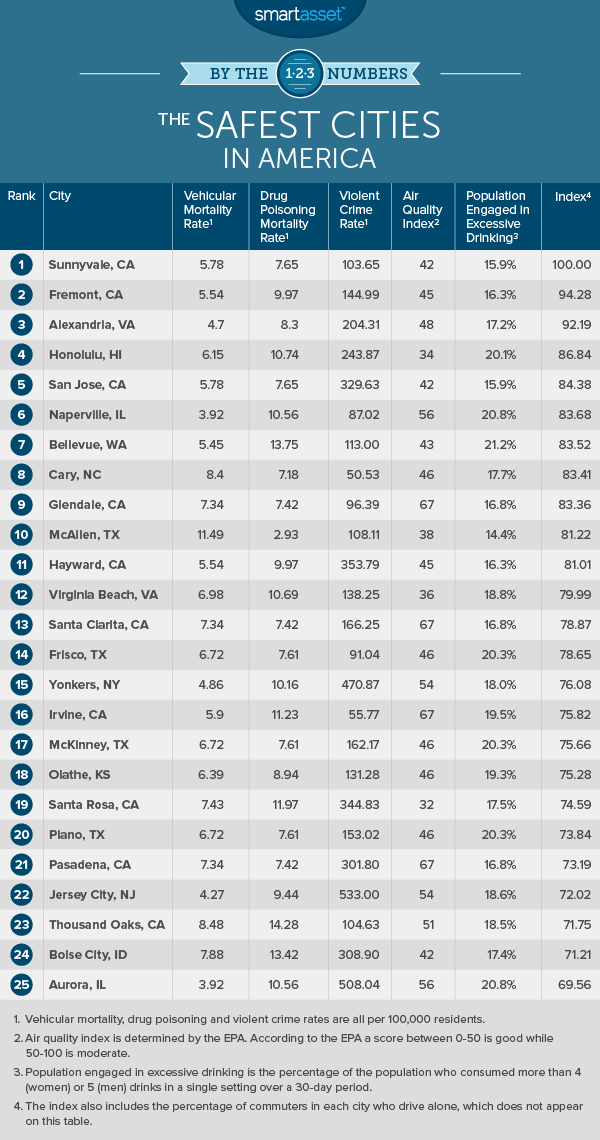 To determine the safest cities in America, SmartAsset looked at data on the largest 200 cities in the country. We considered the following seven metrics, which are reflective of some of the leading causes of death and injury in the country.

Questions about our study? Contact us at press@smartasset.com.
Photo credit: ©iStock.com/GerardoBrucker