The Safest Cities in America in 2015

Safety first, right? Whether you’re thinking about relocating for your career, looking for a good neighborhood in which to buy a home or trying to decide where you want to attend college, safety is always a top consideration. It’s pretty safe to say that no one wants to live in a place where they feel threatened or afraid.

To find the safest cities in the U.S. SmartAsset took a holistic approach, looking at a number of different metrics. Violent crime was a primary factor in our analysis, but we also looked at other measures of safety, such as motor vehicle accidents, drug use and excessive drinking. We considered the largest 200 cities in the U.S. (Read more about our methodology below.)

Key Findings of the Safest Cities in America 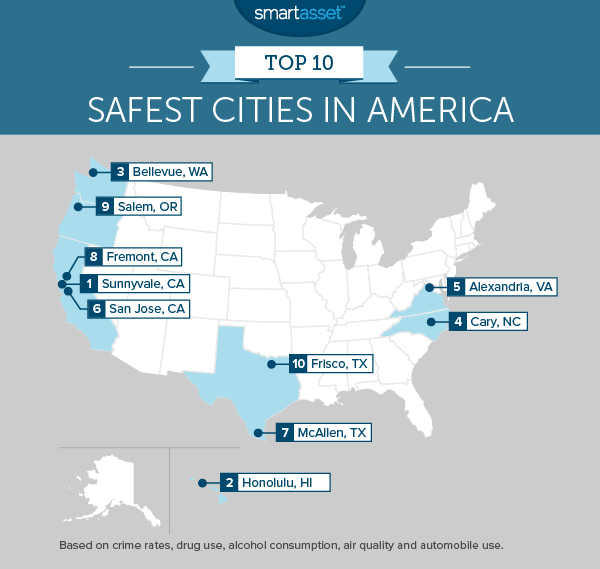 Located in the heart of Silicon Valley, Sunnyvale rates as the safest city in America. The violent crime rate in the city is well below average, but that’s not the only reason Sunnyvale is so safe. It is located in Santa Clara County, which is served by the Valley Transit Authority and has a vehicular mortality rate less than a third the national average. It also has one of the lowest rates of drug use of any county in the country.

Island living is safe living. Honolulu has a violent crime rate of just 230 per 100,000 residents annually. Residents of the city also stay safe by staying out of their cars. 12% take public transportation to work, while another 11% either walk or ride a bike. Just 56% drive to work alone.

Located across Lake Washington from the city of Seattle, Bellevue has grown rapidly in recent years, adding 14,000 new residents between 2010 and 2014. That equals an annual population growth rate of 2.7%, among the highest in the U.S. over that period.

That kind of growth presents challenges when it comes to maintaining public safety, but Bellevue has largely been unaffected. Of the 200 largest cities in the country, Bellevue’s violent crime rate is 22nd lowest.

Relocating? Find out what your commute will be.

Alexandria is part of the Washington Metro system, which makes it easy to commute by train. That is generally a much safer option than driving and indeed Alexandria has the ninth lowest vehicular mortality rate in the country.

Of the three largest cities in the Bay Area, San Jose rates as the safest by a fairly wide margin. Both Oakland and San Francisco have violent crime rates well above the rate in San Jose. Both also have higher rates of drug use. While there are just 7.2 drug poisoning deaths per 100,000 residents annually in the San Jose area, there are more than 20 in San Francisco and more than 10 in the Oakland area.

While border towns are often considered dangerous, in the case of McAllen perception does not meet reality. The city is located in the Rio Grande Valley just north of Reynosa, Mexico. It has one of the lowest crime rates of any city in America, with 122 violent crimes per 100,000 residents. In fact, there were just two murders in all of McAllen in 2013.

Fremont is located north of San Jose along the southeastern shore of the San Francisco Bay. It is located in Alameda County, which has one of the lowest rates of vehicular mortality of any county in the U.S. at just 5.88 per 100,000 residents. That is less than a third of the national average.

The three most common causes of death in the United States are all health related. While there are numerous reasons people are afflicted by heart disease, cancer or respiratory disease, environmental factors can play a role. In fact, earlier this year researchers in Berkeley found that air pollution in China contributes to 1.6 million deaths per year in that country.

Residents of Salem, on the other hand, breathe some of the cleanest air to be found in any U.S. city. The Oregon capital has the third lowest air pollution of any major U.S. city, according to the EPA air quality index. 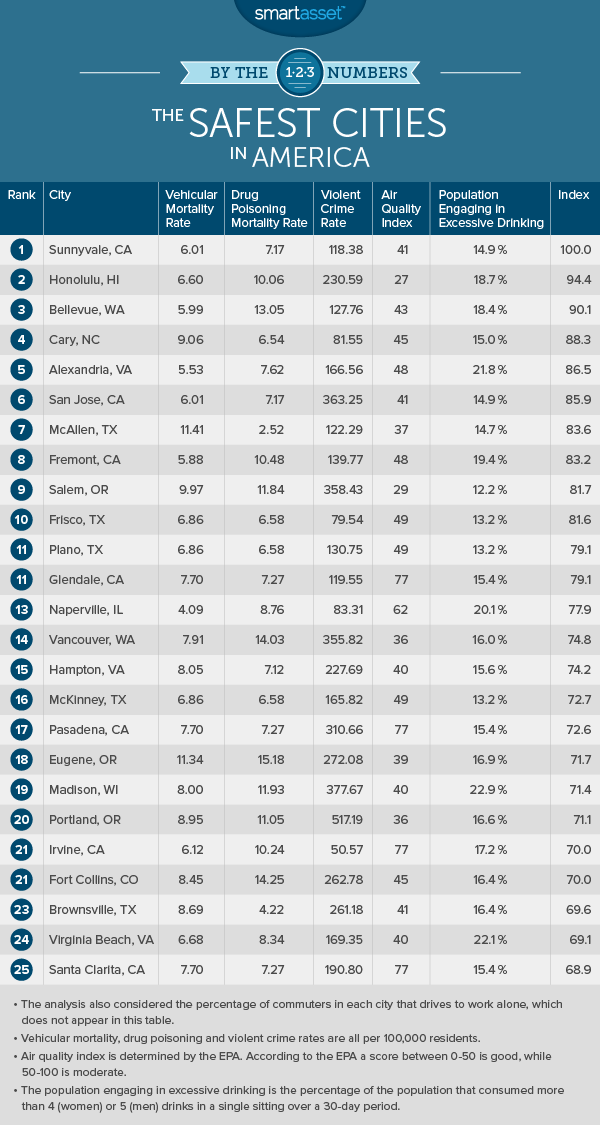 To determine which U.S. cities are safest for residents, SmartAsset look at data on the largest 200 cities in the country. We considered six metrics in total, reflective of leading causes of death and injury in the U.S.

After averaging the overall rankings, we assigned a score that ranged from 0 to 100 based on that ranking. The city with the highest average ranking scored a perfect 100.

Tips for Moving to a New City