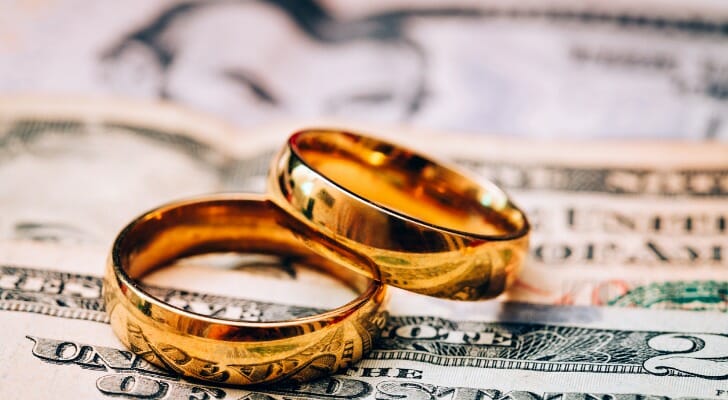 If you’re planning on having a wedding to celebrate your union, expenses can add up fast. And, depending on where you live, nuptials can be extremely stressful to plan, since they involve finding vendors for a seemingly endless number of needs. There are some cities, though, where it is better and cheaper to plan a wedding than others. SmartAsset collected and analyzed data to find the best cities in the U.S. to hold your affordable matrimonial festivities.

To find the best place to plan an affordable wedding, we considered nine specific factors: average cost of a wedding, number of religious organizations, amount of parkland, number of catering companies, number of grooming and clothing professionals (hairdressers, tailors, dressmakers and custom sewers), number of wedding service providers (floral designers, photographers and musicians), number of dining and entertainment establishments, property crime rate and violent crime rate. For details on how we gathered and analyzed our data, see the Data and Methodology section below.

This is SmartAsset’s third study on the best cities for an affordable wedding. Read the last edition from 2017 here. 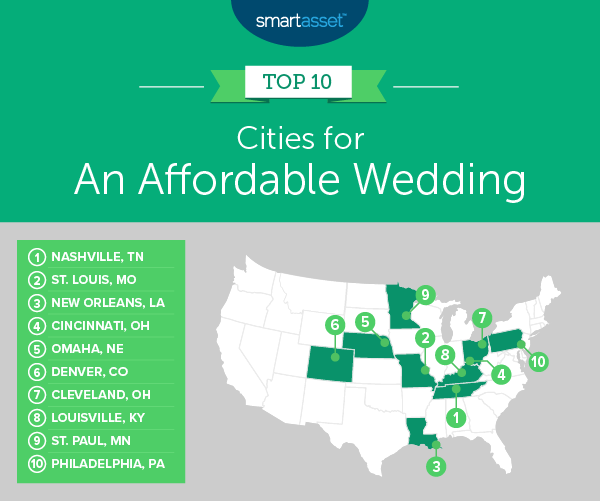 Nashville, Tennessee takes the top spot in this study. Music City ranks at the top of our study for its number of floral designers, photographers and musicians, with nearly 124 per 100,000 residents. Given the country music scene Nashville is known for, this isn’t surprising. The city also ranks first in terms of religious organizations per 100,000 residents, with more than 81.

The average cost of a wedding in Nashville is $21,254, the 14th-most affordable amount in this study. Nashville also provides you and your betrothed a nice financial incentive for cohabitating: it’s one of the top 20 cities in the nation where having a roommate will save you the most money.

St. Louis, Missouri’s biggest selling point is its price. At just $14,562, the Gateway City has the lowest average wedding cost in our study. St. Louis also leads this study in terms of catering companies per 100,000 residents with nearly 13 and comes in second overall for its number of religious organizations, at more than 80 per 100,000 residents. St. Louis is also one of the most undervalued cities in the U.S., a further indication that you’re getting lots of bang for your buck here.

The average wedding cost is $20,599, the ninth-most affordable amount of all 85 cities in our study.

The first Ohio city in our top 10 is Cincinnati. The Queen City doesn’t place in the top 10 for any individual metric but does fairly well in all of them. The average cost of a wedding is $23,493. There are 60.95 acres of parkland per 1,000 residents and more than 156 wedding professionals such as hairdressers, tailors and dressmakers per 100,000 residents.

Omaha, Nebraska is next. This Cornhusker State city is fairly expensive – its $25,611 in average wedding costs ranks toward the middle of this list at 38th overall. Omaha’s number of hairdressers, tailors, dressmakers and custom sewers is a top-10 rate, with more than 178 of these kinds of professionals available per 100,000 residents.

The first and only Mountain West city on this list is Denver, Colorado. With more than 337 dining and entertainment establishments per 100,000 residents, Denver ranks eighth overall for this metric. The city also has a decent number of hairdressers, tailors, dressmakers and custom sewers, a total of more than 177 per 100,000 residents – the 11th-highest rate for this metric in our entire study. A wedding in Denver costs, on average, $23,489.

Cleveland is the second city in Ohio to place in our top 10. The average cost of a wedding in this town is $20,869, the 12th-most affordable in our study. Cleveland also has the second-highest number of hairdressers, tailors, dressmakers and custom sewers in this study, more than 225 per 100,000 residents. It isn’t a great choice for outdoor weddings, though, with only about eight acres of public parkland per 1,000 residents.

Another Midwestern locale is next – St. Paul, Minnesota. This Twin City has an average wedding cost of $24,513, which still ranks within the top 50% of the entire study. It also has more than 206 hairdressers, tailors, dressmakers and custom sewers per 100,000 residents, the fourth-highest rate for this metric. There is more than 16 acres of public parkland per 1,000 residents, making St. Paul a viable contender for consideration if you’re planning an outdoor wedding (perhaps provided that it’s not too cold). What’s more, St. Paul is also one of the top cities in the U.S. for women in tech jobs, so smart brides can earn plenty of money here to afford their wedding expenses.

The final city in our roundup is also the only major East Coast city to crack the top 10 – Philadelphia, Pennsylvania. The City of Brotherly Love has an average wedding cost of $20,557, the eighth-lowest amount in the study. It also has the third-highest number of hairdressers, tailors, dressmakers and custom sewers per 100,000 residents – around 213. 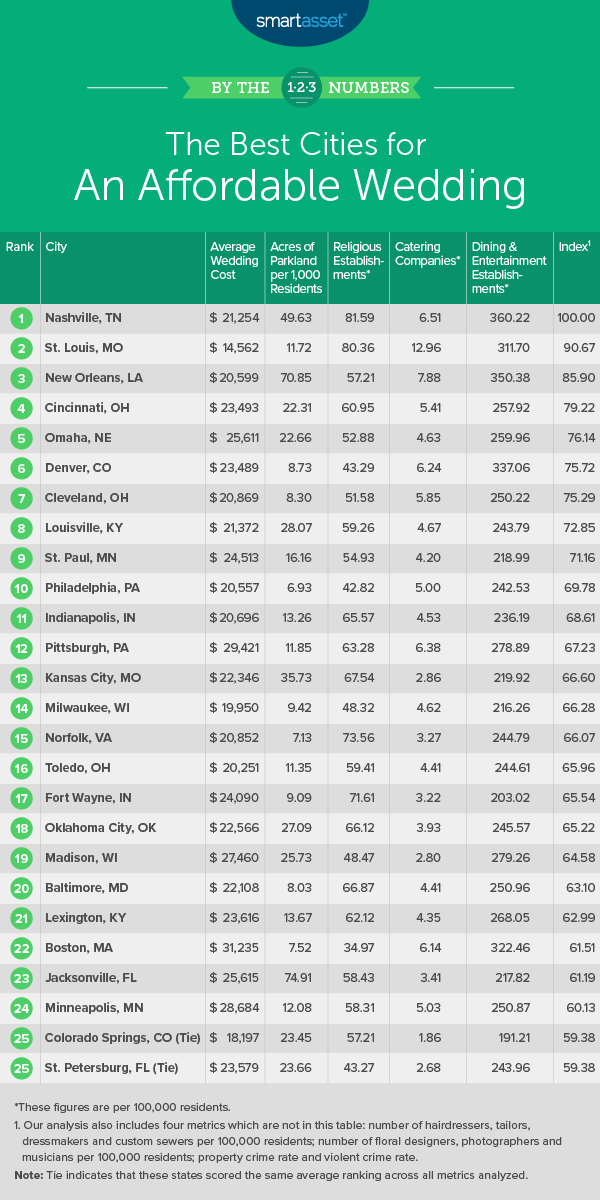 Tips on Managing Your Money