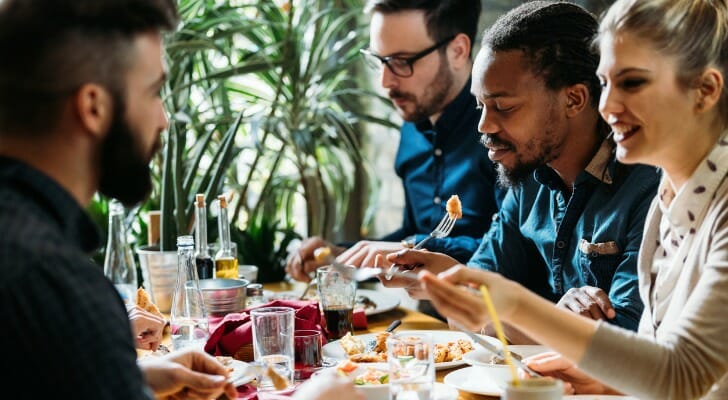 Foodies typically flock to large cities given the availability of many different cuisines and dining options. But are larger cities always the best places for them? In this study, we compiled some of the best cities for food lovers by examining the most important factors foodies look at when considering whether their culinary explorations are worth the money they’re dishing out.

Specifically, for 100 of the largest cities in the U.S., we examined six metrics across three overall categories of availability, affordability and ratings. Our availability score for a city includes the total number of restaurants in each city and the number of restaurants per 100,000 residents. The affordability score considers median rent as a percentage of median income in each city and cost of living in terms of annual food cost for an individual. Finally, our ratings category looks at the number of Michelin-starred restaurants in a city per 10,000 restaurants as well as the average Yelp rating for restaurants in the area. To learn more about our data sources and how we put all the information together to create our final rankings, check out the Data and Methodology section below.

This is SmartAsset’s second study on the best cities for foodies. Read our 2017 study here. 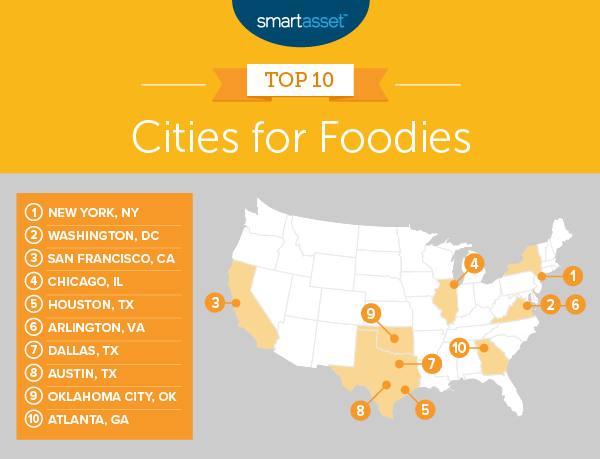 Washington, D.C. ranks in the top fourth of all 100 cities for all three categories. It ranks 10th for availability, 24th for affordability and third for ratings. In fact, for three of the six underlying metrics, the District of Columbia ranks in the top three cities across all places. Those underlying metrics include the number of restaurants per 100,000 residents, the annual estimated cost of food for an individual and the number of Michelin-starred restaurants per 10,000 restaurants.

Like New York, San Francisco, California is expensive. In our affordability category it ranks 64th. Not only are housing costs significant in San Francisco, but so is the estimated annual cost of food for an individual. However, San Francisco makes up for this expense with strong rankings in terms of our other two metrics: availability and ratings. It ranks fourth and first in the two categories, respectively, and has the highest number of Michelin-starred restaurants per 10,000 restaurants of any city we considered.

Chicago, Illinois ranks fifth for availability and fourth for ratings. With the third-highest total number of restaurants of any city in our study, it has many options for foodies who live there. Additionally, there are 22.36 Michelin-starred restaurants per 10,000 restaurants, the fourth-highest number of any of the 100 cities we considered.

Though no restaurants in the city were awarded Michelin stars in 2019, Houston, Texas ranks 16th in terms of ratings. This is primarily due to the small number of cities in the U.S. that have Michelin-starred restaurants and Houston’s high average Yelp rating for restaurants. For the other categories of availability and affordability, Houston ranks 13th and 34th, respectively. Houston ties for first for the lowest annual cost of food for an individual, which is less than $3,000.

Arlington, Virginia is a great spot for budget-conscious foodies. It ranks fifth in our affordability category, the highest of any city in our top 10. In 2017, median annual rent costs were only 19.23% of median annual earnings. Moreover, the MIT Living Wage Calculator estimates that the annual cost of food for an individual is only $2,994, significantly less than that of San Francisco, for which it estimates an annual cost of $3,573.

Dallas, Texas, the ninth-most populous city in the U.S., ranks seventh on our list of the best cities for foodies. Dallas ties Houston for first for the lowest annual cost of food for an individual, according to estimates from the MIT Living Wage Calculator. Houston also has the 18th-highest number of total restaurants of any city in our study. According to the 2016 Business Patterns Survey, there are 4,614 restaurants in Dallas. In comparison, Los Angeles has the highest number of restaurants of any city that we looked at, with 19,334 restaurants within the city limits in 2016.

The third city in Texas in our top 10, Austin ranks 46th, 26th and 12th for availability, affordability and ratings, respectively. Austin impressively has the 10th-best average Yelp rating for restaurants, outranking six other cities in our top 10 for this metric. Additionally, like both other Texas cities in our top 10, Houston and Dallas, Austin ties for first for the lowest annual cost of food for an individual.

For foodies focusing primarily on large cities, Oklahoma’s capital, Oklahoma City, may be overlooked at first. According to Census estimates, there are about 650,000 people living in Oklahoma City. Though this may sound significant, Oklahoma City is only the 27th-most populous city in the U.S. However, Oklahoma City places well across all of our categories, specifically in affordability. It ranks sixth in this category with rankings of 11th and tying for first for the underlying metrics of median rent as a percentage of median income in each city and cost of living in terms of annual food cost for an individual.

Rounding out our list, Atlanta, Georgia comes in as our 10th-best city for foodies. Atlanta is also a growing city. In 2013, the population was 447,848 and in 2017, it was 486,299, an increase of 8.59% over the five years. Though the number of restaurants has not fully caught up with this population growth – its total number of restaurants ranks 63rd in our study overall – Atlanta is still a great place for foodies. It has a top-10 average Yelp rating for restaurants and annual food costs are low. 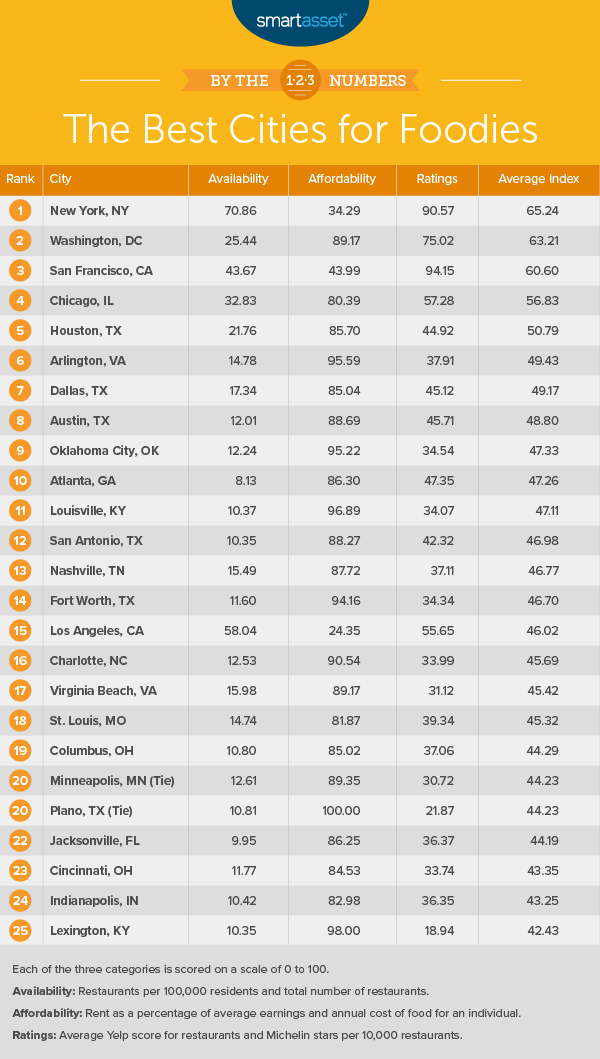 To find the best cities for foodies we pulled data for 100 of the largest cities in America. The data we looked at fell into three categories and included six individual metrics, two for each category. Specifically, we looked at the following: