The Best Cities for Women in Tech in 2019 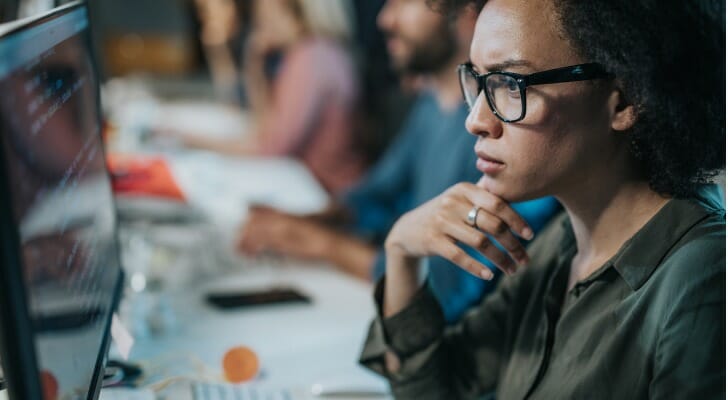 Tech jobs are particularly desirable, because they pay well, show long-term signs of growth and are less vulnerable to automation. But women have faced systemic difficulties in getting these jobs. And even when women do find jobs in the tech world, they earn 84% of what men in tech do, according to Census Bureau data, and thus have less opportunity to save. This is true at the national level, but there are some cities where parity between men and women in tech is less of a concern.

Below, we rank the best cities for women in tech. To do this, we looked at four factors. Specifically, we analyzed data on the gender pay gap for women in tech, income after housing for women, women as a percent of the tech workforce and the percent change in tech jobs. To see where we got our data and how we put it together to create our final rankings, check out our data and methodology below.

This is SmartAsset’s fifth annual study on the best cities for women in tech. Check out the 2018 version here. 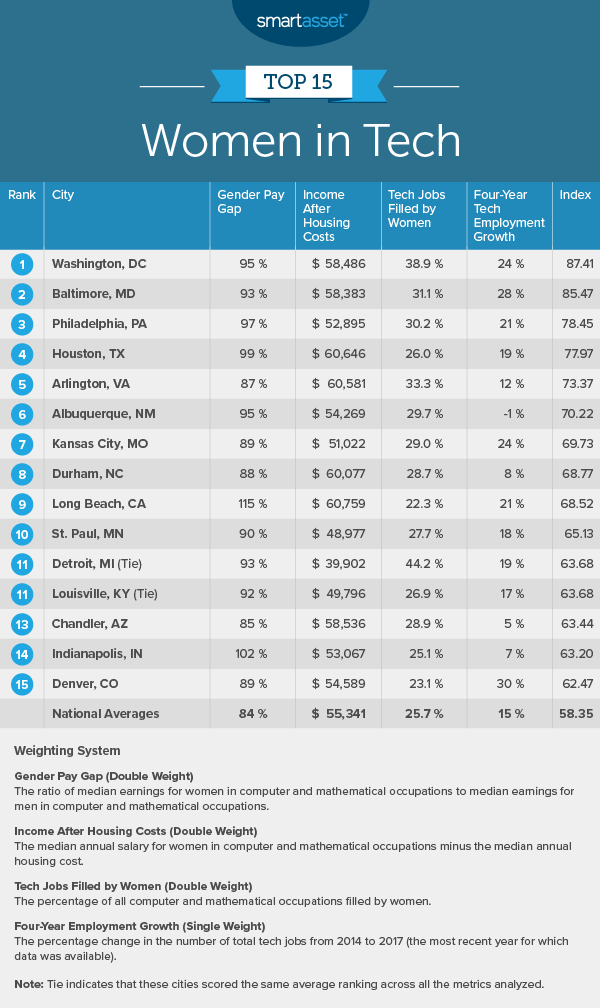 Washington, D.C. has, for a few years now, been a great landing spot for women in tech. The pay gap for women in tech here is small. On average, women in the tech workforce here are paid 95% of what men are. Perhaps the statistic most worth highlighting is the proportion of women who work in tech. They make up nearly 39% of the workforce, the second-highest rate in the study.

Baltimore, a city near the nation’s capital, is also great for women in tech. The gender pay gap here is fairly low, at 93%. What’s more, women make up almost a third (31%) of the tech workforce. Women with an eye on the future will be happy to hear that tech jobs here grew by 28% from 2014 to 2017. Baltimore ranks ninth in that metric.

Philadelphia has an even smaller tech pay gap than the cities ranked above. On average in Philly, women in tech earn 97% of what men in tech do. Only three other cities can beat that score. Women also make up about 30% of the tech workforce. That may not sound like a lot, but it beats out the vast majority of cities. If the City of Brotherly Love wants to climb into the top two spots, income after housing will need to rise here. This city ranked 24th for income after housing for women in tech.

The motivations for working in tech are varied, but certainly one reason to be a tech worker is the pay. In Houston, the average female tech worker has about $60,600 left over after paying for the average home. In that metric, this city ranks eighth. That pay also means male and female tech workers are paid nearly identical amounts. For gender pay gap, Houston ranks third.

Arlington stands out for its large proportion of female workers in the tech sphere. Roughly one-third of all the tech workers here are women, the fifth-highest rate in the study. The pay here for women is also pretty good. After factoring in housing costs, the average woman in tech has nearly $60,600 leftover. One concern women may have is the fact that pay in tech is fairly unequal in Arlington between men and women. Women in tech make only 87% of what men in tech do.

Albuquerque, New Mexico’s tech hub for women, takes sixth. This city has a tech gender pay gap of 95%, which is the seventh-lowest in the study. Women also make up nearly 30% of the tech workforce, which is the 10th best rate in the country. Albuquerque is dragged down the ranks a bit as a result of the relatively stagnant growth in tech jobs here.

Women make up a large chunk of the Kansas City tech workforce. Roughly 29% of all tech workers in Kansas City are women. That’s good enough for the 11th-highest rate in the study. Kansas City also ranks in the top 20 for tech employment growth and gender pay gap. Only the relatively disappointing income after housing metric lets Kansas City down.

Durham saw poor tech job growth relative to other cities. But that should not scare tech women away. Durham has the 20th-lowest tech gender pay gap, the 11th-highest income after housing for female tech workers and the 13th-highest rate of women working in tech.

St. Paul ranks in the top 15 for only one of our metrics: It lands at 12th for gender pay gap. But while it doesn’t hit the heights in any single metric, it also won’t leave women in tech with much to complain about. St. Paul ranks no worse than 33rd in any single metric — in the income after housing data point — and ranks in the top 20 in two metrics.

Louisville ranks in the top 20 for gender pay gap and women as a percent of the tech workforce. Unfortunately, the tech scene in Louisville doesn’t deliver robust salary rewards for its workers relative to some aspects of the cost of living here: Louisville ranks 31st for income after housing.

Chandler has the 12th-highest income after housing for women in tech. This city also ranks 12th for women as a percent of the total tech workforce. Roughly 29% of tech jobs in the city are filled by women.

Indianapolis is a great city for women working in the tech field looking for some semblance of equality. On average women and men in tech are paid nearly the same amounts, and more specifically, Indianapolis ranks second for gender pay gap. Thanks to affordable housing costs, the pay in Indianapolis also goes pretty far for women in tech. Indianapolis ranks 22nd for the income after housing metric.

Denver ranks in the top 20 for three different metrics. Specifically, Denver has a gender pay gap of 89%, income after housing for women equal to $54,589 and tech job growth of 30% over the time period we analyzed. Denver fell to 15th, because women make up just 23% of the tech workforce, the second-lowest figure in the top 15.

To find the best cities for women in tech, SmartAsset looked at data for cities that have at least 200,000 residents. We took out any city from our data set that did not have statistically reliable data. This left us with a data set of 58 cities. We ranked them using the following four metrics:

After ranking each city in each metric, we found each city’s average ranking, giving tech employment growth a single weighting and all other metrics a double weighting. Using this average ranking, we created our final score. In our index, from 100 to 0, 100 represents a hypothetical city that ranks first in all metrics and 0 represents a city that ranks last in all metrics. We scored all 58 cities according to how they stacked up to the potential ideal score.

Tips for Maximizing your Savings