The Best Cities for an Affordable Wedding in 2017

Wedding costs are climbing. Between 2014 and 2015, the average cost of a wedding rose by 4.6%, according to The Knot Real Weddings Study. Nuptials now cost $32,641, on average, and one in eight couples spend more than $40,000 when tying the knot. Interestingly enough, research suggests that brides and grooms who spend more money on their weddings have a greater chance of getting divorced. Read on for our ranking of the best U.S. cities for an affordable wedding.

This is the second annual study of the best cities for an affordable wedding. Read the 2016 analysis.

SmartAsset wanted to find the best places for an inexpensive wedding ceremony and reception. Our analysis considers the same factors that we included in the 2016 edition of our study. But this year we gave more weight to the metric that looks at the average cost of a wedding in each city. We also considered crime rates, acres of parkland, access to religious establishments, caterers and dining and entertainment establishments and the availability of professionals needed to host a wedding (i.e. hairdressers, dressmakers, tailors and photographers).

We ranked the 100 largest U.S. cities across each of our factors. For more information about how we conducted this study, read the data and methodology sections below.

See the average budget for someone in your neighborhood.

New Orleans is the second-best city for an affordable wedding. The city ranked well for having a large number of catering companies and dining and entertainment establishments per 100,000. But since the Crescent City is known for its flavorful food, that’s not a surprise. In 2016, New Orleans ranked as one of the top 10 cities for outdoor enthusiasts. There are 71.7 acres of parkland for every 1,000 residents. So if you’re opposed to having a wedding in a church, synagogue or mosque, you could opt for a ceremony at a local park.

According to theweddingreport.com, the average wedding in Richmond, Virginia costs $22,073. With its Southern charm, Richmond could be a great location for brides and grooms trying to plan a ceremony that won’t break the bank. To cut costs, couples can get hitched during the off-season and rent an affordable venue like the Renaissance or the Boathouse at Rocketts Landing.

When it comes to choosing a location for a wedding in Omaha, brides and grooms have quite a few options. There are elegant, modern venues such as the Omaha Design Center, where Fashion Week events take place. And then there are unique spaces for those who want a nontraditional ceremony, like the Henry Doorly Zoo. The average cost of a wedding in Omaha is $27,996. So whenever they’re ready to select a venue or book a band, couples can expect to spend less than their counterparts nationwide.

Couples typically have to work with many different vendors in order to pull off a wedding. Fortunately, in Kansas City there’s no shortage of professionals who can offer a helping hand. There are roughly 109 photographers, musicians and floral designers per 100,000 residents and more than twice as many hairdressers, tailors and dressmakers. A typical couple in the city spends $25,101 to tie the knot.

Out of the 100 cities that we ranked to complete our study, St. Louis is the cheapest place to get married. Saying “I do” costs couples in the city just $17,326, on average. When they’re ready to start planning, brides and grooms can use local resources such as bridestlouis.com. The website offers daily advice and reviews of wedding venues. Couples can also visit the site to register for free seminars that cover everything from finding a caterer to buying a house.

As America’s “Bible Belt,” the South is home to a countless number of historic churches. In Greensboro alone, there are about 86 churches and other religious establishments for every 100,000 residents. The average wedding in Greensboro costs $26,645. Instead of renting out a church, mosque or synagogue couples may be able to save money by getting married at a public park or an outdoor venue. A popular location is the Greensboro Arboretum Garden, a 17-acre space owned by the Greensboro Parks & Recreation Department.

Related Article: The Cost of Living in North Carolina

Madison is a quintessential college town. In fact, in the three years that we’ve ranked the best college towns to live in, Madtown cracked the top 10 each time. Data from theweddingreport.com reports that the average cost of a wedding in Madison is $30,134. Alumni who are nostalgic for their college days can easily get married on campus. The University of Wisconsin-Madison has several different venues that former students can rent out for their wedding receptions. Varsity Hall seats 400 people and the Great Hall ballroom can seat 330 people at banquet tables and 220 people at round tables.

Weddings cost $23,110 in Toledo, Ohio, on average. That means that total wedding costs in the Glass City are 5.2% and 14.9% lower, on average, than they are in Cleveland and Columbus (respectively).

Milwaukee ranks as the 10th-best place for an affordable wedding. Among all of the cities in our study, Milwaukee has the second-highest number of hairdressers, dressmakers and tailors for every 100,000 residents. Brides who need to keep their wedding costs low can shop for their gowns at local boutiques and shops, such as the Zita Bridal Salon or the Hallelujah Fashion formal wear store. 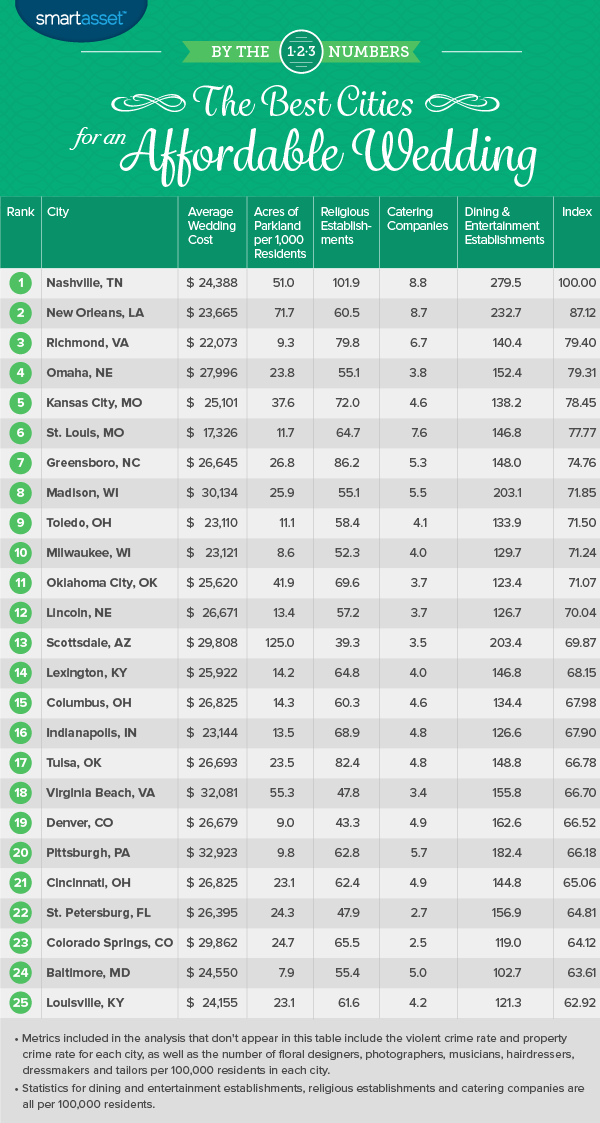 To find the best cities for an affordable wedding, SmartAsset looked at the following factors:

To complete our analysis, we ranked the 100 largest cities in the country across each of our factors. Then we averaged our rankings, giving half-weight to our crime-related factors, double weight to our wedding cost factor and full weight to the rest of our metrics. Note that we changed our methodology slightly this year as compared to 2016’s study, by giving double weight to wedding cost.

Data on the average cost of a wedding comes from theweddingreport.com and reflects the total cost of a wedding in the county in which each city is located. Crime rates are 2015 data from the FBI as well as state and local police departments.