The Best Cities for an Affordable Wedding in 2016 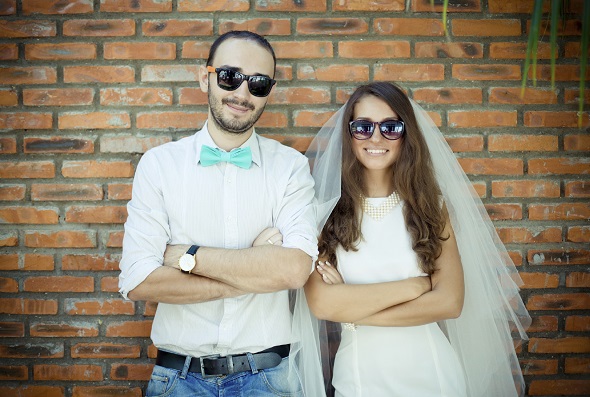 Your wedding is supposed to be one of the best days of your life – but it can also be one of the most expensive. In 2014, the average wedding in the U.S. cost $31,213, according to The Knot’s Real Weddings Study. That’s a lot of mullah! The good news is that couples who don’t have that much money or would rather spend their cash elsewhere (on a down payment, for example) have options.

The single largest cost for most weddings is the venue, which means the easiest way to save is to choose your setting wisely. The courthouse is the cheapest choice, of course, running less than $100 in most areas. But even couples who would like a little more romance and a little less Law and Order don’t have to break the bank to have the wedding of their dreams.

To find the best cities for an affordable wedding, SmartAsset looked at data on wedding costs and the availability of wedding facilities and amenities in the 100 largest cities in the U.S. We considered nine metrics in all, including the concentration of low-cost venues (such as churches, synagogues or parks), the average cost of a wedding and the number of caterers in each city.

The top cities are places where it’s possible to have a fun wedding while sticking to a budget. (Read more about our methodology below.) 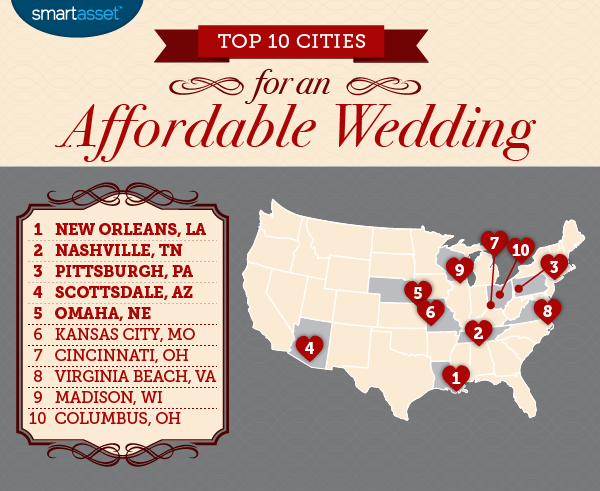 For anyone who wants a fun wedding that doesn’t drain the bank account, the Big Easy may be the perfect choice. First and foremost, it is relatively affordable, with the average wedding costing $21,654 – sixth lowest among the 100 largest U.S. cities.

Price isn’t the only reason to have a New Orleans wedding, however. From the variety of live music to the electric atmosphere of Bourbon Street, wedding guests and participants alike are all but guaranteed to have a great time in the Big Easy, which ranked third out of the largest 100 U.S. cities for its concentration of catering companies and sixth for the number of dining and entertainment establishments.

Nashville is known for its music, but the promise of a great band isn’t the only reason to have a Music City wedding. For example, couples who want to have a religious ceremony should have no problem finding a venue in Nashville.

It rated first in the U.S. for its concentration of religious establishments like churches, synagogues and mosques. According to the U.S. Census Bureau, there are 439 such institutions in Nashville – one for every 978 residents.

The third best U.S. city for an affordable wedding is Pittsburgh, Pennsylvania. Steel city rated well for its concentration of wedding support personnel (floral designers, musicians and photographers) as well as the number of hairdressers, tailors and dressmakers in the city. According to TheWeddingReport.com, the average cost of a wedding in Allegheny County is $27,262.

Scottsdale’s warm, sunny climate make it a great locale for a winter wedding. While summers in Scottsdale may be too hot for many to have an outdoor wedding, winters see highs in the 60s and 70s.

Plus, the city has lots of outdoor venues. It rated third in our study for its parkland acreage, with 127 acres of parkland for every 1,000 residents. Those looking for a more private (albeit more expensive) venue may want to consider one of the city’s many country clubs and resorts.

This Nebraska city has long been recognized as a great place to start a family. It rates as a top city for children and also as the least-risky housing market in Nebraska. Fitting, then, that it is also a great place for a couple to start their life together.

The average wedding cost in Omaha is below the national average. The city is also home to 291 religious establishments, according to the U.S. Census Bureau, meaning there are plenty of options for couples who want to have a religious ceremony.

Related Article: How Much Does the Average Wedding Cost?

The average wedding cost of $22,258 in the Kansas City area rates as the 7th lowest among the 100 cities in our study. Couples who’d like to spend less than that should be able to find savings in a number of ways in KC.

For example, having an afternoon reception at a public park could save thousands of dollars off the overall price of renting out a venue. The city has 37.9 acres of public parkland for every 1,000 residents – that’s 13th highest among the country’s 100 largest cities.

Another potential source of savings? Food. Try ordering some of Kansas City’s famous barbecue instead of hiring a fancy caterer.

Located along the Ohio River in southwest Ohio, Cincinnati rates as the sixth best U.S. city for an affordable wedding. According to TheWeddingReport.com, the average cost of a wedding in the Cincinnati area is $24,713, several thousand dollars lower than the national average. If that sounds like too high a price tag, you might be able to save some cash by swapping out the open bar for a few kegs of local Cincinnati beer.

There’s something romantic about the ocean and when it comes to seaside weddings, Virginia Beach is hard to top. The city provides a number of resources to plan a wedding on the beach, including a special beach wedding permit that guarantees a private section of beach for your ceremony. Virginia Beach is also among the safest cities in our study, with the eighth lowest violent crime rate of America’s largest 100 cities.

Everyone wants to look good on their wedding day. In Madison, that shouldn’t too hard. The city ranked 10th out of the 100 largest U.S. cities for its concentration of hairdressers, tailors and dressmakers. It also has the 10th highest concentration of restaurants, bars and entertainment establishments, which means out-of-towners will have plenty of ways to spend their time before and after the wedding.

Columbus is a college town, a state capital and the largest city in Ohio. Among the possible wedding venues in Columbus are Ohio Stadium (for Buckeye fanatics), the Ohio Statehouse (for the civic-minded) and the Dawes Arboretum (for outdoor enthusiasts). The average wedding price in the Columbus area of $24,876 is well below the national average. 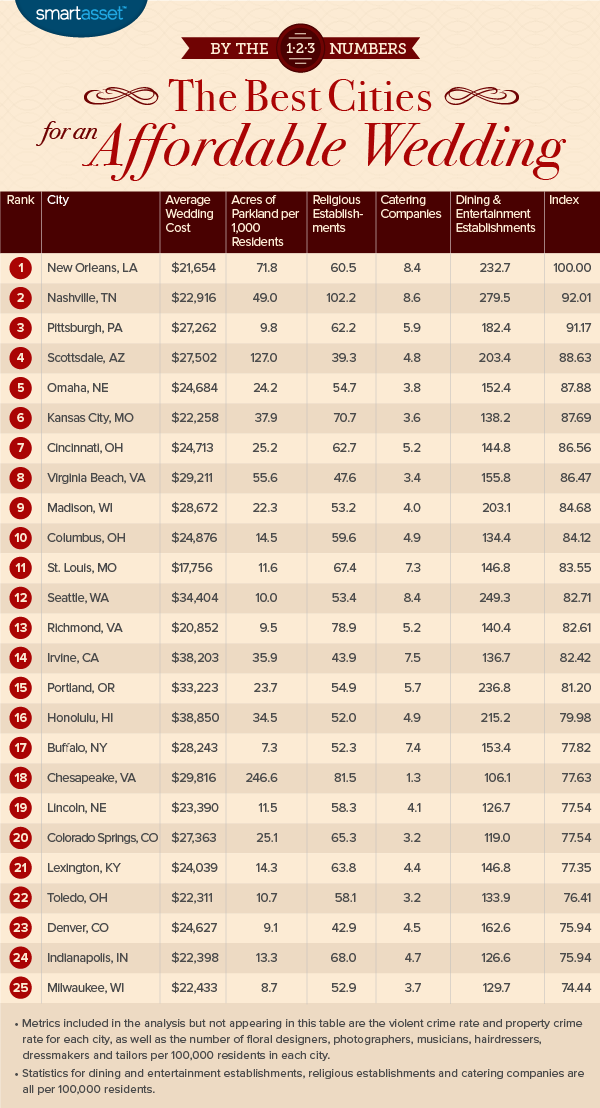 In which major U.S. cities is it possible to have a wedding that is both affordable and fun for guests and participants alike? To answer that question SmartAsset looked at data on the 100 largest U.S. cities. Our analysis considered nine separate metrics:

We ranked each of the 100 cities in our analysis according to these nine metrics. Then we averaged those rankings, giving half weight to each of the measures of crime and full weight to all other metrics. Lastly, we calculated a score from 0 to 100 based on that average ranking. The city that rated best across the nine metrics scored a perfect 100.