The Best Cities for First-Time Homebuyers in 2017 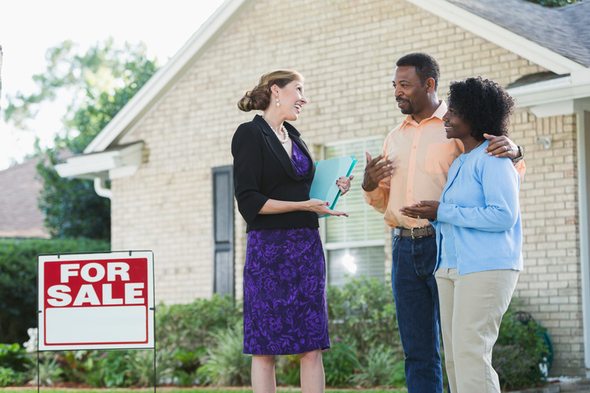 Today’s young adults are waiting to buy homes. A recent survey from the National Association of Realtors revealed that the average first-time homebuyer is in her early 30s. Most of the people surveyed agreed that a home is a worthwhile investment. But the percentage of primary homes purchased by first-time buyers was down to 32%. That’s 8 percentage points lower than the historical average.

This is the third annual study of the best cities for first-time homebuyers. Read the 2016 version here.

Homeownership remains a distant dream for many Americans, particularly millennials. But in some cities, homes are more affordable and mortgages are more accessible to first-time buyers.

Start saving:  Work with a financial advisor to get financially ready to buy a house.

SmartAsset wanted to find the best cities for first-time homebuyers. So we pulled data for every U.S. city with at least 300,000 residents. Then we ranked each city across the same seven factors that we considered in the 2016 edition of our analysis.

We concluded that first-time buyers would prefer to purchase homes in stable housing markets with affordable housing and low market volatility. We also looked at the availability of conventional mortgage loans. Read our data and methodology section below for more details on how we conducted our study. 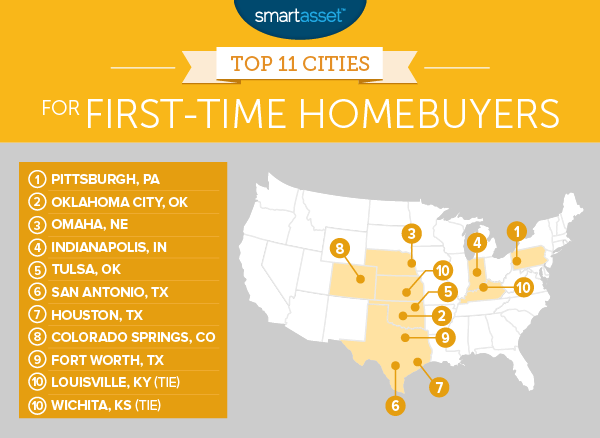 Pittsburgh ranks as the No. 1 city for first-time homebuyers. In the past year, the city’s loan funding rate has increased by 36%. This means that conventional mortgage loans have become more accessible in Pittsburgh. There have been zero year-over-year declines in the FHFA home price index since the first quarter of 2011. What’s more, the value per square foot in Pittsburgh is just $82.08, the ninth-lowest value in our study.

When it comes to changes in home prices, Oklahoma City has one of the least volatile housing markets. There were only four quarters of year-over-year declines in the FHFA home price index from the beginning of 2011 to the end of 2016. Oklahoma City is also an affordable city for first-time homebuyers. In terms of its income-to-housing-costs ratio, it ranks in the top 25.

Omaha has one of the highest loan funding rates in our study. Of all the homebuyers who apply for conventional, non-jumbo loans, 84% have their loan applications processed. That’s a good indication that many first-time homebuyers will be able to get approved for the mortgage loans they apply for.

The value per square foot in Omaha is $107.08. That puts the city in the middle of the pack when it comes to housing affordability. Fortunately, there are programs available that can provide first-time buyers with financial assistance. The Omaha Housing Program, for example, offers grants to qualifying homebuyers.

Indianapolis is a fairly inexpensive city for homeowners. The median household income in Marion County, Indiana is around $42,168 and median annual housing costs (plus closing costs) add up to about $9,833.42. Across a five-year period, its income-to-housing-costs ratio is the fourth-highest ratio in our analysis.

At $70.58, the value per square foot in Indianapolis is the fourth-lowest value in our study. That means the city is relatively affordable for first-time homebuyers. One of our recent studies estimated that it would take less than three years of work to afford a down payment on average, assuming that Indianapolis homebuyers are putting down 20% and saving 20% of their income (if they earn the city’s median household income).

For the third consecutive year, Tulsa ranks as one of the best cities for first-time homebuyers. Its loan funding ratio (or conventional mortgage loan originations as a percentage of conventional loan applications) remains at 74% and market volatility remains at 2.4%. For first-time homebuyers who would like a professional’s financial advice before making a purchase, these are Tulsa’s top financial advisor firms.

San Antonio ranks as one of the top cities for first-time buyers in terms of affordability and market volatility. Its value per square foot in 2015 was around $80.50. Since 2011, there have only been three negative quarters. In other words, there have been few year-over-year declines in the home price index, according to the Federal Housing Finance Agency.

According to the Department of Housing and Urban Development, there are 204 approved mortgage lenders in Houston. That’s the highest number of lenders in any city in our analysis. When first-time homebuyers have many different lenders to choose from, it can be easier to get a mortgage with attractive rates and loan terms.

Data from the Mortgage Bankers Association also suggests that homebuyers in Houston have a good chance of getting the mortgage loans they apply for. In 2015, there were 37,620 applications for conventional mortgage loans in Harris County, Texas and 26,048
loan originations. That’s a loan funding ratio of 69%.

Colorado Springs has the eighth-highest loan funding ratio in our analysis. About 78% of those who apply for conventional mortgage loans in El Paso County, Colorado have their loans processed by lenders. There are also 85 HUD-approved lenders in Colorado Springs, meaning that first-time homebuyers have plenty of options when they’re ready to apply for a mortgage.

Data from SmartAsset’s study of the healthiest housing markets reveals that the housing market in Fort Worth is relatively stable. Since the beginning of 2011, there have been just five quarters of year-over-year declines in the FHFA home price index. When housing markets experience stable growth, buyers feel more confident about purchasing homes.

There are about 72 HUD-approved lenders in Louisville and three-quarters of conventional mortgage loan applicants in Jefferson County get their applications approved and processed. Plus, Louisville has the ninth-highest affordability ratio in our study. No wonder it’s one of the best cities for first-time homebuyers. If you plan to stop working sooner rather than later, you may want to consider making Louisville your permanent home. It recently ranked as the best city for an early retirement.

Wichita is tied with Louisville as the 10th-best cities for first-time homebuyers. Wichita has the third-highest income-to-housing-costs ratio in our analysis, meaning that it has a low cost of living. It also has a high loan funding rate. One downside is that there are only 35 HUD-approved mortgage lenders in the city of Wichita. That translates to fewer mortgage products for first-time buyers to choose from. 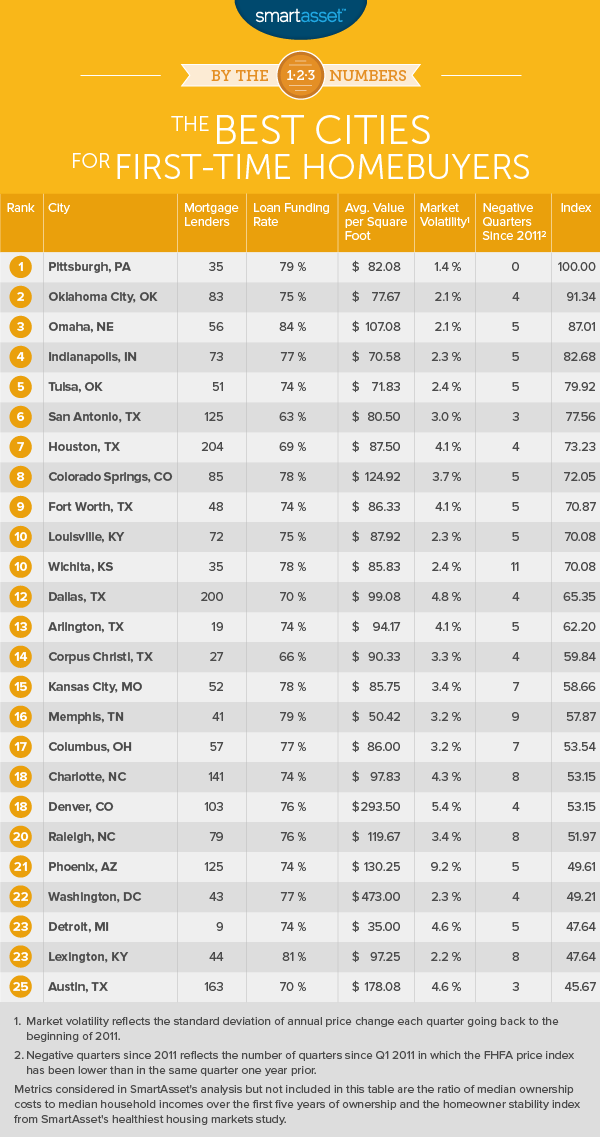 To find the best cities for first-time homebuyers, SmartAsset collected data for every U.S. city with a population of over 300,000. The population in Anchorage recently dipped under that threshold. So that left us with 64 cities. (Anchorage would have ranked 17th if we had included it in our analysis.) We ranked each of those cities using the following seven metrics: