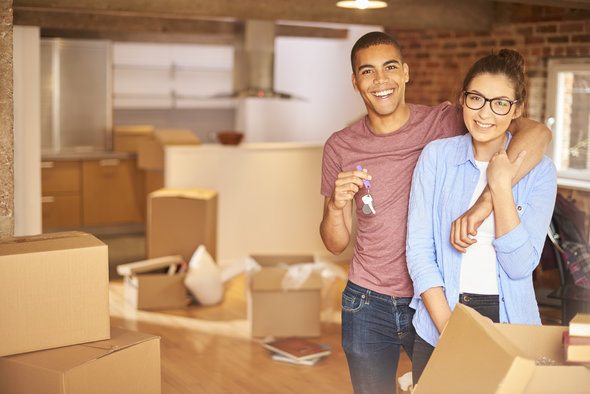 In order to determine how long it takes to save for a down payment, we looked at data on median home prices and median household income in the 15 biggest cities in the country (population-wise). In conducting this study, we assumed that the households would make the median income in each city and would be buying a median-priced home. We calculated how long it would take for households to save enough for a 20% down payment (the recommended amount) if they saved 20% of their incomes. We then ranked each city by length of time needed to save to afford the down payment.

Readers should keep in mind that even if residents in some cities save enough for the down payment on the median home, the ensuing mortgage payments may still be out of their reach. Take New York City, for example. An average household which makes a down payment of $98,000, would have a mortgage balance of $395,000. Using SmartAsset’s mortgage calculator, we estimate that monthly payments for that mortgage would cost about $2,700, after factoring in real estate taxes. That’s too expensive for the median household bringing in a pre-tax monthly income of $4,400, on average. In fact, that’s a whopping 61% of the pre-tax income. 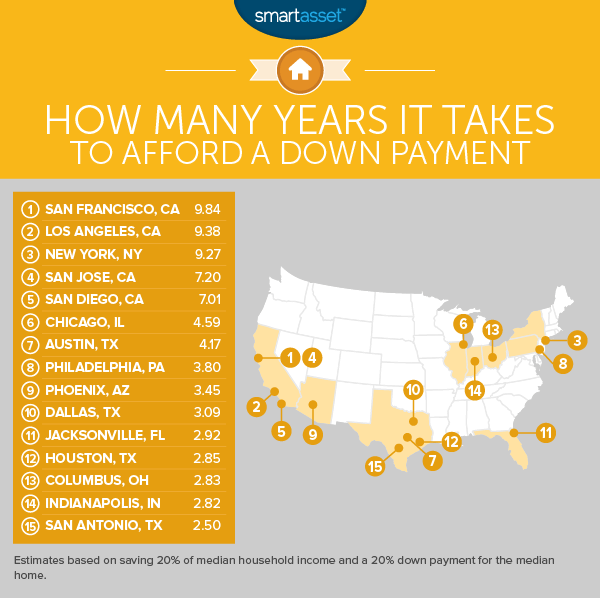 San Francisco has one of the priciest housing markets in the country. Median rent in SF costs almost $20,000 per year, according to the U.S. Census Bureau. And if you are a renter, switching to owning a home won’t be easy. Data from the Census Bureau shows that for average households in San Francisco to put a down payment on the median-priced home, they will need to save for over 9.84 years, despite taking home $81,294 on average, every year. It takes so long because San Francisco has the highest median home value in the country at $799,600, almost $200,000 more than the second-highest, San Jose.

New York’s situation is similar to that in Los Angeles. The average home in New York has a value just shy of $500,000 and the average resident makes $53,000. Of course, New York is one of the most expensive cities in the country, so saving 20% of income per month may require some diligence. The average household would need to save for just over nine years for a down payment on a median-priced home.

San Jose residents are some of the highest earners in the country. Partly thanks to the tech industry, households here make $84,600 per year, on average. But unlike San Francisco, home values in San Jose are not as high. The median home value in San Jose is $609,500, meaning residents only need to save for 7.2 years in order to reach the $121,900 they will need to afford a down payment.

The median home value in the Windy City is $222,900. That is less than half of what New Yorkers have to pay and almost a quarter of what homeowners in San Francisco are forced to fork over. For Chicagoans earning $48,500, on average, saving up for a down payment would take just over 4.5 years. Chicago is the first city on our list where after saving for a down payment, the average household would be able to afford paying for the median-priced house. After putting down 20% on a $222,900 home, using SmartAsset’s mortgage calculator, we estimate that the homeowner in Chicago would be paying about $1,232 per month toward mortgage and real estate taxes. That’s 32% of their income.

The average household in Austin needs to save for just over four years to have enough for a down payment. Austin is an interesting city within the larger Texas landscape. Austin residents, despite only making about 25% more than neighboring cities like Dallas and Houston, end up paying 50% more in housing.

Of the 15 cities in our list, Philadelphia residents bring home the least bacon. Just $38,253 per household on average, according to U.S. Census Bureau data. Despite this, Philadelphia homes are still the ninth-most expensive at $145,300, on average. Philly households would need to save up for about 3.8 years to have enough for a down payment.

Traditionally, Phoenix has been seen as one of the more affordable big cities to live in. In fact, in a previous study, we showed that the renting market in Phoenix was relatively manageable. The same is true for buying a home. Saving up for a down payment would only take about 3.45 years, on average and thanks to the relatively low costs of living in Phoenix, saving 20% of income might be easier than in other places.

Buying a home in Dallas is within average workers’ reach. The median home value is only $135,400 and the average household makes $43,781 per year. This means that if Dallas households saved 20% of their income each year it would take just over three years to save up for a down payment, on average. Relative to other big cities that’s not much time at all.

If you are a first-time homebuyer, Houston may be the place for you. In a previous study, we determined it was the fifth-best city for first-time homebuyers, thanks to the high number of mortgage lenders and the high loan funding rate. We found that it would only take about 2.82 years for the average Houston household to save up for the down payment on a median-priced home.

The Arch City is ranked 13th for length of time needed to save up for a down payment, just barely longer than Indianapolis one spot below. Data from the U.S. Census Bureau shows that Columbus households earn $45,659 per year on average, so they need to save for 2.83 years to afford the down payment on a $129,100 home.

The Crossroads of America is a great spot to lay down roots if you are looking to buy a home in a big city. The average home is worth about $118,300, so for a household making an annual $41,987, it would take 2.82 years of saving to afford the down payment.

San Antonio has much to offer prospective homebuyers, affordability being at the top of that list. The average San Antonio household makes $46,744 per year and the average home is worth $117,000. In order to have enough for a down payment, households would need to save 20% of their income for 2.5 years. 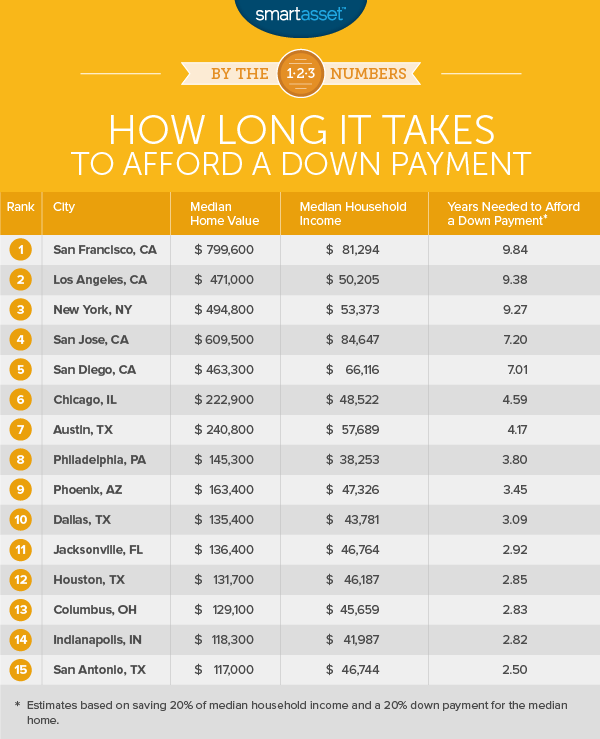