What is a Trade War? Definition and Examples 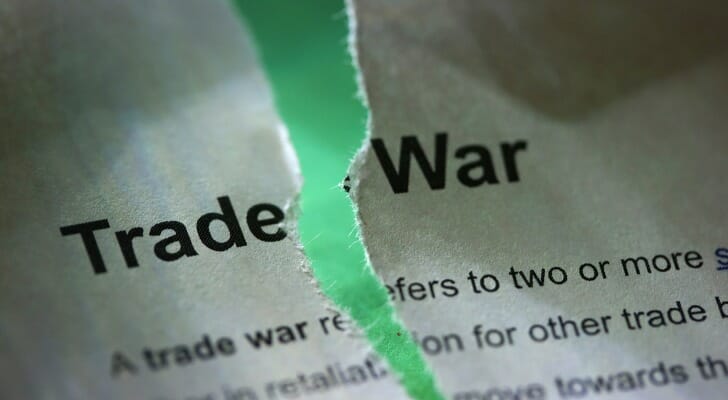 A trade war is a conflict between two countries marked by rising tariffs and other similar protectionist actions. Remember, a tariff is a tax put into place by one country on imported goods or services from another country. Learn the basics of trade wars, their pros and cons, plus how they affect the economy.

A trade war occurs when one country imparts a tariff or import restrictions or quotas on imports from another country. As a result, another country imparts tariffs and quotas of their own in retaliation. This can be detrimental to both country’s economies. For example, it can impact domestic businesses and national exports. Also, can raise prices on goods that consumers need and want. Consequently, it can negatively affect diplomatic relationships between countries that are trading partners. However, there are some positives of trade wars, such as shielding domestic industries from foreign imports and job creation.

Trade wars are an aftereffect of protectionism. Protectionism is not necessarily a bad thing. For example, it can help protect domestic businesses, jobs, and revenue against competition from foreign imports. However, trade wars are almost always damaging to both countries’ economies.

You may have heard the term trade war when referencing the latest conflict between the United States and China. President Donald Trump announced plans for higher tariffs on imports of billions of dollars of Chinese-produced goods. However, trade wars have been occurring throughout history. For instance, the Boston Tea Party was part of a trade war. Other examples include the Smoot-Hawley Tariff Act of 1930, the Chicken Tariff War of the 1960s, and 1987’s trade war with Japan.

Pros and Cons of Trade Wars

At face value, a trade war may initially seem negative. But there are some advantages. First ly, a trade war can help foster the growth of domestic industries. It can also help shield them against unfair competition overseas. For instance, it can target goods cheaply mass-produced overseas to help more expensive, domestically-produced items. This, in turn, may safeguard domestic jobs or even helps create new ones.

Trade wars can also help lower a nation’s trade deficit. Such deficits occur when the imports of a country are larger than its exports. As a result, a nation spends more on purchasing imports than it makes on exports. While many countries have a trade deficit (including the United States), this can be detrimental to a nation’s economy.

Finally, a trade war can target a country that may use unfair trading as leverage in foreign policy. In this way, it can be a useful tool for some nations to maintain ethical trading practices in regards to imports from other countries.

That being said, a trade war can also get out of control quickly. Consequently, it can damage the relationship between two trading partners beyond repair. It can also raise prices for consumers, since there are fewer choices for that particular good or goods. A trade war also may increase inflation and delay economic growth.

How it Affects the Economy

Limitations on foreign imports and tariffs may initially have a positive effect on a country’s economy. They can protect domestic industries and therefore, jobs, However, they can also have some potentially disastrous long-term effects. For example, a trade war can spark downturns in either countries’ economies, can trigger inflation, and can even hike up the cost of goods since the trade war limits competition.

However, trade wars can also help eliminate a country’s trade deficit. Ideally, they encourage consumers to buy domestically-made products rather than imported ones due However, consumers also pay higher costs for imported goods due to tariffs and sanctions.

A trade war can temporarily increase domestic jobs, boost industry, and increase revenue, in the long-term, However, it can have disastrous effects: job loss, devaluation of currency, and even inflation. Trade wars can also have negative effects on diplomatic relations and international trade.

A trade war is a conflict between two countries marked by rising tariffs and other similar protectionist actions. Trade wars are usually a result of protectionism.

Trade wars can initially have a positive effect on a country’s economy by protecting domestic industries and jobs. Also, a trade war can lower a country’s trade deficit since it encourages consumers to buy domestically-made products rather than imports. However, they can also have some potentially negative long-term effects.