Years of Work Needed to Afford a Down Payment – 2020 Edition 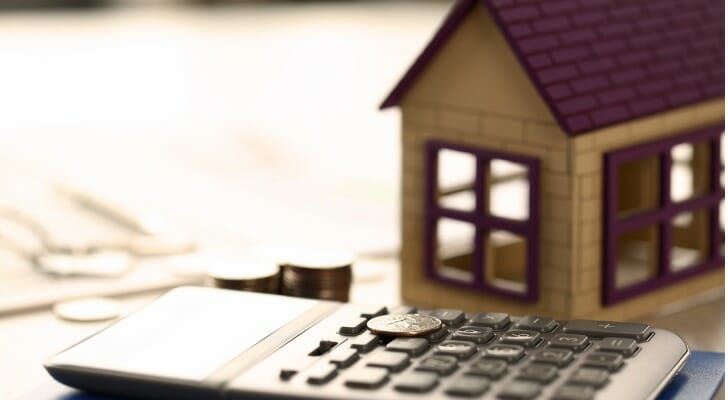 Owning a home is a dream for many Americans, but it can be difficult to attain. Monthly costs, which can include mortgage payments, taxes and insurance, total an average of $1,082 nationwide, according to the Census Bureau. And that’s after paying for the upfront costs of a home, including a down payment. Most people who don’t take out an FHA or conforming loan make a down payment of 20% the home value. In some cities, though, it can take much longer to afford a down payment than in others.

In this study, SmartAsset examined the number of years of work needed to afford a 20% down payment on the median home in each of the 50 largest cities in the U.S. To do this, we used median income figures and assumed that workers would save 20% of their income each year. For details on our data sources and how we put all the information together to create our final rankings, check out the Data and Methodology section below.

This is SmartAsset’s fourth look at how many years of work it takes to afford a down payment. Read the 2019 rankings here. 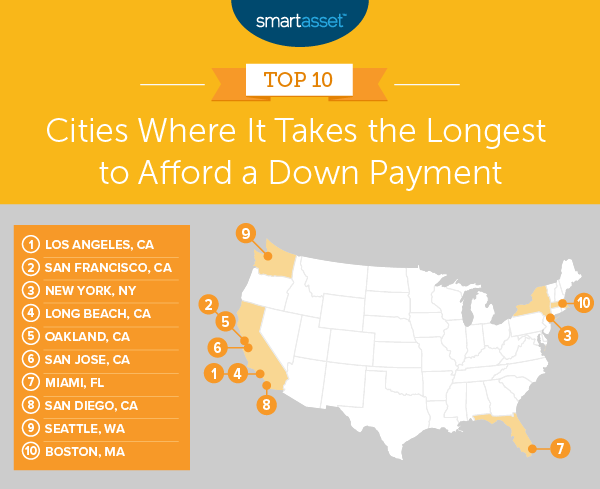 Los Angeles, California is the U.S. city in which it would take the longest time to work to be able to afford a down payment – almost 11 years. The median home value in Los Angeles is $682,400, which makes a 20% down payment total more than $136,000.

Using median income and home value, we estimate that the average San Francisco, California household would need to save for 10.64 years to afford a down payment, assuming a savings rate of 20% of pre-tax income each year. The median home value in the city is $1,195,700, the highest in the study. A 20% down payment on this home is approximately $239,000. San Francisco ranks behind Los Angeles because of a higher average income. The median household income in San Francisco in 2018 was $112,376 compared to $62,474 in Los Angeles.

Potential homebuyers who live in San Francisco but are not yet ready to stop renting might wish to consider searching for a roommate, as this living situation helps renters save the most relative to any other city.

New York City ranks as the third city with the highest average number of years of work needed to afford a down payment. It’s perhaps no surprise that it ranks No. 3, since it’s one of the cities where the average household is able to afford the least amount of home. Given the Census Bureau’s estimate of $63,799 as the median household income and assuming the ability to save 20% (or about $12,760) each year, the average household would need to work for more than 10 years to pay off a down payment in the city. This payment would be $129,020, which is 20% of the median value home, $645,100.

Women in this city who are looking for a new job to help them reach their homeownership goals may be interested in learning that Long Beach is one of the best cities for women in tech.

In San Jose, California the average household would need to work approximately eight and a half years to save enough to afford a 20% down payment on the median-valued home in the city. The median home value in San Jose is $968,500, the second-highest across all 50 cities in our study. However, San Jose also has the highest median household income in the study, at $113,036, meaning that the amount saved may be higher on average.

With an average home value of $575,200, a 20% down payment in Boston, Massachusetts would total $115,040. Given that the median household income in Boston is about $71,800, the average household would need to work for 8.01 years to save enough for this down payment, assuming a savings rate of 20% on pre-tax income each year.

Renters in Boston who are still unprepared to transition to homeownership might have some help in building their savings: In recent years, rent in Boston has been becoming more affordable.

To rank the cities where the average household would need to save the longest to afford a down payment, we analyzed data on the 50 largest cities in America. We specifically considered two pieces of data:

Data for both factors comes from the Census Bureau’s 2018 1-year American Community Survey.

Tips for Managing Your Mortgage