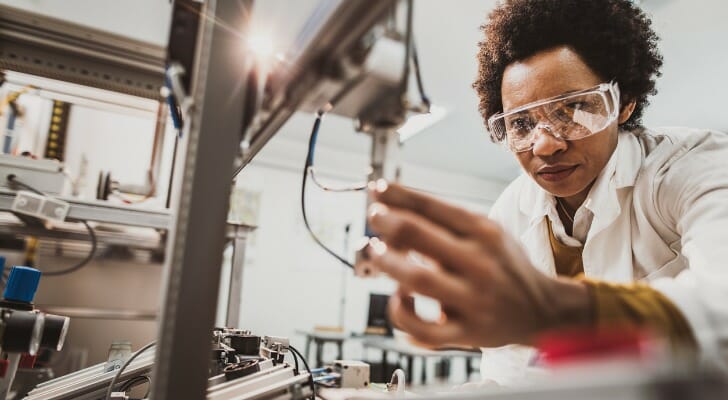 The employment of computer and information technology workers is projected to grow by 12% from 2018 to 2028, adding almost 550,000 new jobs, according to estimates from the Bureau of Labor Statistics (BLS). Many of these jobs are expected to be well-paying. In May 2018, the median annual salary for computer and information technology occupations was close to $90,000. However, employment opportunities and pay in tech jobs still tend to favor men. Women make up about 26% of the tech workforce nationally and, on average, are paid only 83% of what men are paid in the industry. This affects all of their money matters, such as their ability to save a sufficient amount while also covering their various expenses.

Though disheartening at the national level, women have had great success breaking into the tech industry in some cities. In this study, we uncovered the best cities for women working in tech by considering four factors: gender pay gap, earnings after housing costs, women’s representation in the tech workforce and four-year tech employment growth. For details on our data sources and how we put all the information together to create our final rankings, check out the Data and Methodology section below.

This is SmartAsset’s sixth annual study on the best cities for women in tech. Check out the 2019 version here. 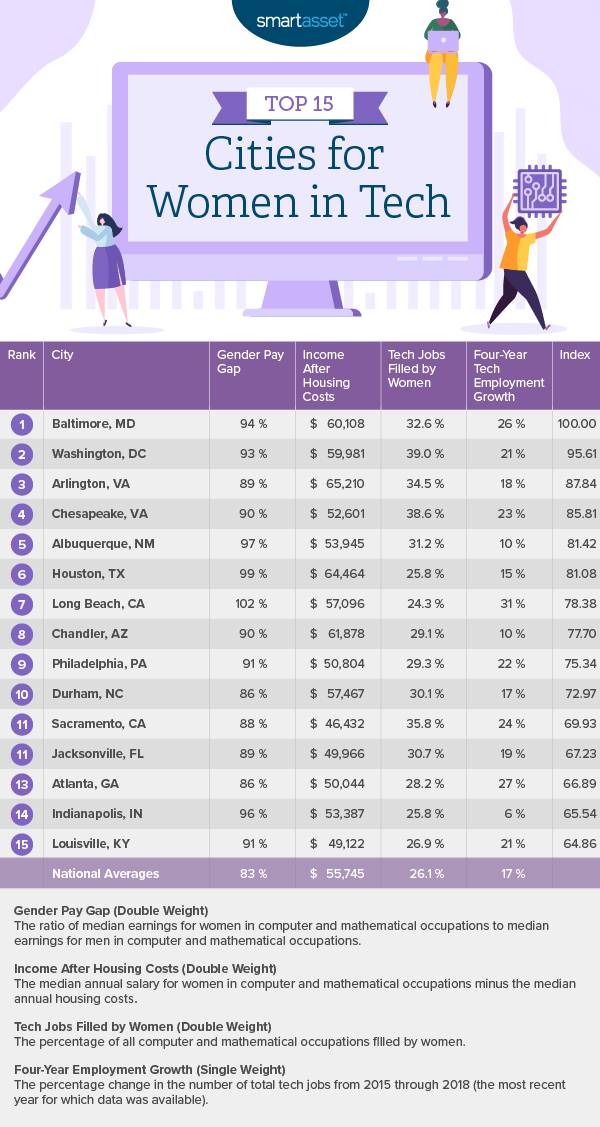 Baltimore, Maryland took the top spot in this year’s study, moving up from second place last year. Baltimore ranks in the top 25% of all 59 cities in our study across all four metrics. Women make up about 33% of the tech workforce there, and their average earnings are about 94% of that of men working in the industry. Additionally, average earnings after housing costs for women tech workers surpasses $60,000. Overall, employment in the tech industry in Baltimore has grown by 26% over the four years from 2015 through 2018.

The nation’s capital takes the second-highest spot in the study. Women make up 39% of the tech workforce in Washington, D.C., the highest percentage for this metric of any city in our top 10 and second-highest overall. The gender pay gap in the tech industry is also smaller in the District of Columbia relative to that of other cities. Census data from 2018 shows that median earnings for women and men working in tech in Washington are $80,321 and $86,109, respectively. In percentage terms, the average earnings for women working in tech are 93% that of men working in tech.

Arlington, Virginia has consistently ranked as one of the most livable cities in the U.S., partially due to its affordable housing costs as compared to income. In this study, we found that average earnings after housing costs for women working in tech were $65,210 in 2018, the sixth-highest amount for this metric across all 59 cities. Additionally, women constitute 34% of the tech workforce in Arlington, which is the sixth-largest percentage in the study for this metric.

About 200 miles southeast of Arlington, Chesapeake, Virginia ranks as the No. 4 city for women in tech in 2020. The gender pay gap in the tech industry in Chesapeake is about 7% smaller than it is nationally, with women making about 90% of what men make. Women are also a relatively large part of the tech workforce there. About 39% of the city’s tech jobs are occupied by women, according to recent Census data.

Though the tech industry in Albuquerque, New Mexico grew by less than 10% over the four years from 2015 through 2018, Albuquerque ranks roughly in the top third of cities of our study for the remaining three metrics. Women make up 31% of the tech workforce in the city, their average earnings are about 97% of men’s earnings and average earnings after housing costs are almost $54,000. Women in tech also get a lot of bang for their buck in Albuquerque, as the city also ranks well among the most undervalued cities in America.

In Houston, Texas, average 2018 earnings for women in tech represented 99% of men’s earnings. That amounts to a difference of $451. As a percentage of men’s average earnings, women made 99%. Houston also has the eighth-highest average earnings amount for women tech workers (after housing costs), at almost $64,500.

Average earnings for women working in tech are higher than those of men in Long Beach, California, the only city in our study for which this is the case. Additionally, the technology industry has grown significantly in Long Beach recently. In 2015, there were about 4,500 residents working in tech, but by 2018, there were close to 6,000. That marks an increase in tech workers of more than 30%, the fifth-largest percentage growth in employment for any city in our study. Life in Long Beach is expensive, though; the city ranks No. 4 on our list of where the average household can afford the least home.

While housing costs can sometimes be prohibitive even for high-earning tech workers, Chandler’s women in tech have a high average salary after deducting housing costs. More specifically, this figure is $61,878 and ranks as the ninth-highest income after housing costs in our study.. For women working in tech who value telecommuting, Chandler ranks No. 9 on our list of best cities to work from home.

Though the gender pay gap grew in Philadelphia, Pennsylvania between the 2019 and 2020 editions of this study, the city still ranks well on this metric relative to other places. Data from 2018 shows that the gap is about 91%, with women making $62,492 on average relative to men’s average earnings of $68,484.

In 2018, women filled about 30% of tech jobs in Durham, North Carolina, the 10th-highest percentage for this metric across all 59 cities in our study. Additionally, Durham’s female tech workers have average earnings of about $57,500 after deducting housing costs.

In Jacksonville, Florida, women make up almost 31% of the tech workforce and are paid about 89% of what men working in the industry are paid, on average. Relative to other cities in the study, it ranks ninth- and 18th-best, respectively, on those two metrics.

The tech industry in Atlanta, Georgia grew by 27% from 2015 through 2018, the 11th-highest increase for this metric in the study. Along with that growth, the cost of living in Atlanta has generally trended upward, though pay for women tech workers seems to be keeping up. We found that the average earnings for women tech workers after housing costs is greater than $50,000.

Tying for 11th last year, Louisville, Kentucky fell to 15th place this year. Though tech employment continues to grow at a strong pace in the city, the gender pay gap has widened among tech workers. In Louisville’s tech industry, women’s earnings went from 92% of men’s earnings in 2017 to 91% in 2018.

To find the best cities for women in tech, SmartAsset looked at data for cities that had at least 200,000 residents in 2018 according to Census Bureau data. We removed cities from our data set that did not have statistically reliable data (i.e. the margin of error for average earnings for women who work in tech or the number of women working in tech was greater than 20%). Those two constraints left us with 59 cities, which we compared across the following four metrics: