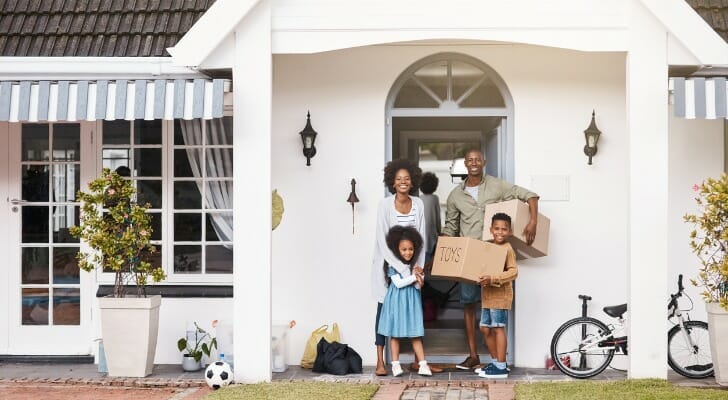 When choosing where in the U.S. to settle down and take out a mortgage, people consider a variety of factors like housing costs, cost of living, safety and dining and entertainment options. It is possible to measure livability by evaluating how cities rank on these fronts.

Since U.S. city environments can vary drastically, SmartAsset ran the numbers and uncovered the most livable cities in America in this study. Looking at 100 of the largest cities, we considered seven metrics: walkability, violent crime rate, property crime rate, unemployment rate, population density, housing costs as a percentage of income and housing cost-burdened rate. For details on our data sources and how we put the information together to create our final rankings, check out the Data and Methodology section below. 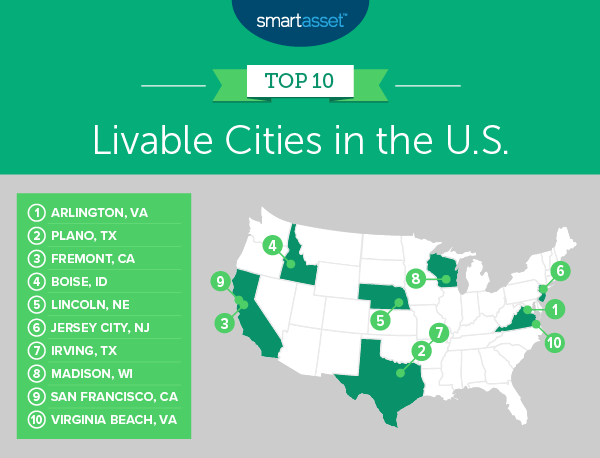 Like last year, we found that Arlington, Virginia is the most livable city of the 100 we considered. Located just across the Potomac River from the nation’s capital, Arlington had the lowest unemployment rate, 1.9% in July 2019, of any city in our study. In addition, using 2018 FBI crime data along with population estimates from the Census Bureau, we found that Arlington had violent and property crime rates of 155 and 1,425 per 100,000 residents, respectively. Relative to the 99 other cities in our study, this is the fifth-lowest violent crime rate and fourth-lowest property crime rate.

The livability score for Plano, Texas is high given its low crime rates. In 2018, there were 140 violent crimes and 1,722 property crimes per 100,000 residents, ranking fourth and eighth, respectively. Plano also does well on our two housing-related metrics, housing costs as a percentage of income and housing cost-burdened rate. In 2018, median housing costs as a percent of median income was 19.4%, the sixth-lowest overall. Additionally, the majority of households spent less than 30% of their income on housing costs, meaning that they were not housing cost-burdened, according to guidelines from the Department of Housing and Urban Development (HUD). Only about 28% of households were housing cost-burdened, the seventh-lowest percentage for this metric across all 100 cities in our study.

Boise, Idaho ranks in the top 20% of cities for five of the seven metrics in our study, ranking particularly well for its low unemployment rate and low housing cost-burdened rate. Boise is part of Ada County, and in July 2019, only 2.5% of the labor force was unemployed within the greater county, according to estimates from the Bureau of Labor Statistics (BLS). Additionally, 2018 Census data showed that 28.2% of households were housing cost-burdened, the eighth-lowest percentage of all cities in our study.

Lincoln, Nebraska ranks well in our study because of its relatively low crime rates and affordable housing costs. In 2018, Lincoln had the 20th-lowest violent crime rate and 35th-lowest property crime rate of all 100 cities in our study. Median annual housing costs as a percentage of income in Lincoln was the 10th-lowest rate in the study and the percentage of housing cost-burdened households was the fifth-lowest. With low average housing costs, residents may be able to afford a bigger home. Take a look at our home-buying calculator to see what kind of house you can afford in Lincoln.

Jersey City, New Jersey does particularly well on two metrics, walkability and population density. Walkscore.com calculates walkability of cities on a 0 to 100 scale, where a lower number means the city is less walkable while a higher number means it is more walkable. Jersey City receives a score of 87.3, the highest of any city in our top 10 and second-highest in the study overall, following only New York, New York. Jersey City is also a relatively populous city, suggesting that there are more options for dining and entertainment in the surrounding area. We estimate that there are almost 18,000 people per square mile in Jersey City, the third-highest population density in the study overall, following only San Francisco, California and New York.

Job opportunities significantly affect the livability of a city. The low unemployment rate in Madison, Wisconsin suggests a plethora of job opportunities for people just moving to the city and long-term residents alike. According to estimates from the BLS, the unemployment rate in the greater county of Dane was 2.6% in July 2019, the fifth-lowest of any city in the study. Additionally, Madison is relatively walkable. Walkscore.com gives Madison, Wisconsin a score of 48.7, the 37th-highest across all 100 cities in the study.

Known for its hills, San Francisco, California is a very walkable city despite some steep inclines. Walkscore.com gives San Francisco a score of 86.0, the third-highest of the cities in our study. San Francisco also ranks second for population density as well as unemployment rate. There are about 18,845 people per square mile in the city, and the unemployment rate for the greater county in July 2019 was 2.4%.

Virginia Beach, Virginia rounds out our list of most livable cities. Though it falls behind other cities in terms of walkability and population density, ranking 86th and 92nd on the two metrics, respectively, it is a relatively safe and affordable city. In 2018, there were 117 violent crimes and 1,726 property crimes per 100,000 residents, the third- and ninth-lowest rates for these metrics across all 100 cities in our study. Additionally, residents on average spend less on housing, potentially allowing them to save more. Median housing costs as a percent of median income was 22.2% in 2018, ranking 31st-lowest overall. 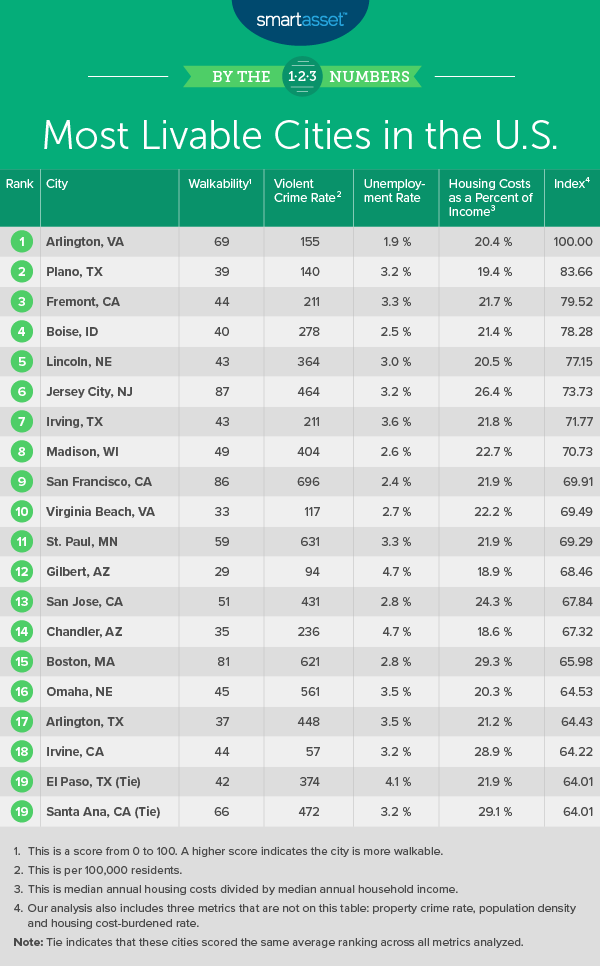 To find the most livable cities in the U.S., we analyzed data on 100 of the largest cities in America. We looked at each city according to the following seven metrics: