The Fastest-Growing Jobs for Women in America – 2019 Edition 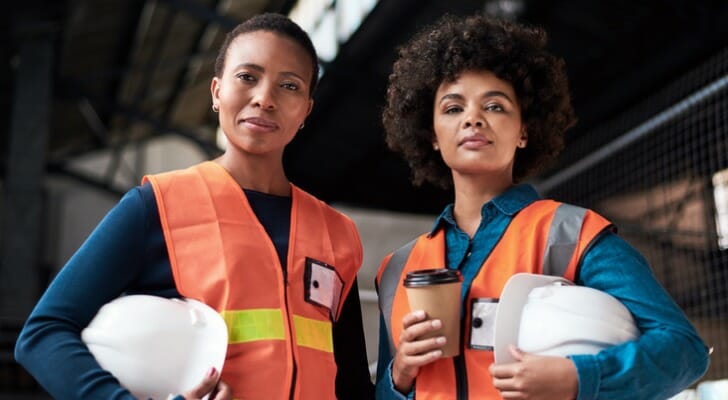 Women constitute nearly half of the workforce in the U.S. According to 2018 data from the Bureau of Labor Statistics (BLS), 46.9% of total workers are women, a figure that stayed constant from 2014 data. Despite the fact that the overall percentage remained unchanged over that time period, certain jobs and occupations in particular have seen significant growth for women, which in turn positively impacts their ability to save. These occupations include not only previously male-dominated jobs, but also other jobs for which the occupation overall is growing.

In this study, SmartAsset looked more closely at some of the fastest-growing jobs for women. Using BLS data from 2014 and 2018, we ranked percentage growth by occupation for occupations that employed greater than 25,000 women in 2014. We have contextualized this growth for the top 10 fastest-growing jobs for women, listed below, by highlighting the percentages of women and men employed in the occupation and the growth of the occupation overall. For more information on our data sources and how we put together our findings, check out our Data and Methodology section below. 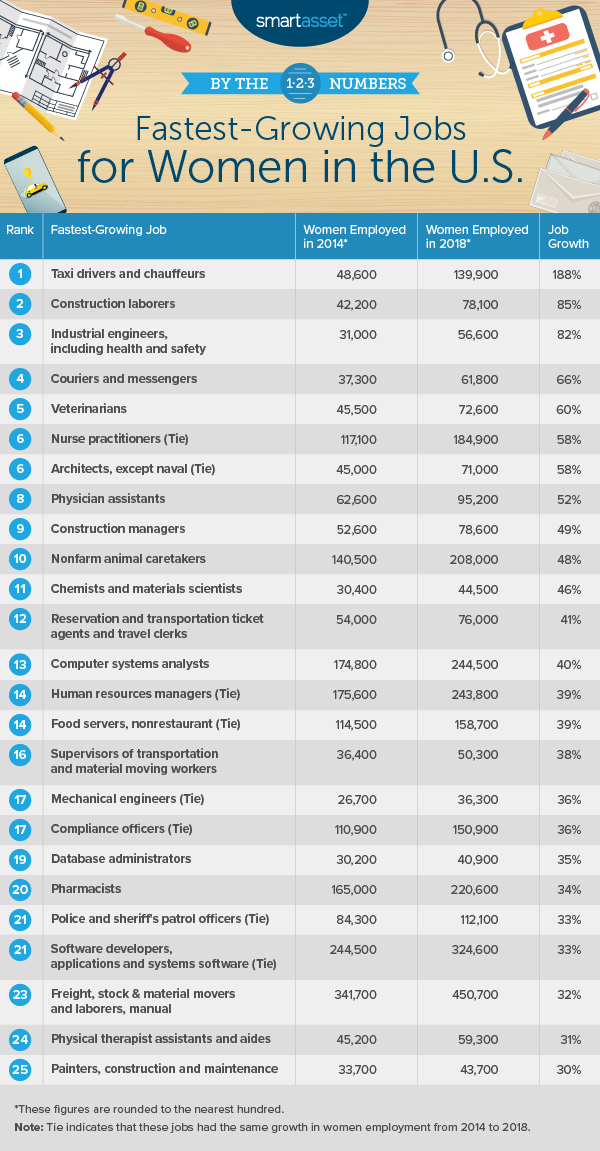 There were 394,000 more taxi drivers and chauffeurs in the U.S. in 2018 than there were in 2014, with the occupation more than doubling over five years. Largely the result of the increased prevalence and use of ride-sharing applications such as Uber and Lyft, taxi driver and chauffeur growth is in part driven by women drivers.

3. Industrial Engineers, including Health and Safety

Working to eliminate wastefulness in production processes, industrial engineers typically have a bachelor’s degree and are well compensated. According to the BLS, the median annual income for an industrial engineer in 2018 was $87,040.

Though the number of women employed in this occupation has grown approximately 58% – almost 68,000 more nurse practitioners – from 2014 to 2018, the percentage of women in this job among all employees saw a decrease of about five percentage points. This means that there has been a greater growth in male nurse practitioners than female practitioners during this period. In general, nurse practitioners should not be worried about job security looking forward. The BLS projects that the employment of nurse practitioners will grow more than five times faster than the average growth for all occupations. Not all places in the country are equally conducive to thriving as a nurse: Check out our study on the best places to be a nurse in the U.S.

The 2014-to-2018 change in total number of women employed as architects (except naval architects) closely mirrors that of the change in the total number of women employed as industrial engineers over that time period. In 2014, about a quarter of these architects were women, and in 2018, almost 30% were women. In gross terms, in 2014 there were about 45,000 women architects in the U.S. and in 2018 there were about 71,000. For architects who want to be surrounded by other likeminded people, check out the top places for creatives.

Like nurse practitioners and physician assistants, women nonfarm animal caretakers comprised at least two-thirds of all people employed in that job in 2018. In 2014, approximately 70% of nonfarm animal caretakers were women, and in 2018, about 78% were women. Over that five-year period, the growth for women was about 48% – or about 67,500 jobs – compared to an overall growth of 33.3% for both men and women during that time period.

All data, including earnings data, comes from the Bureau of Labor Statistics. Employment data is reported to the nearest hundred.