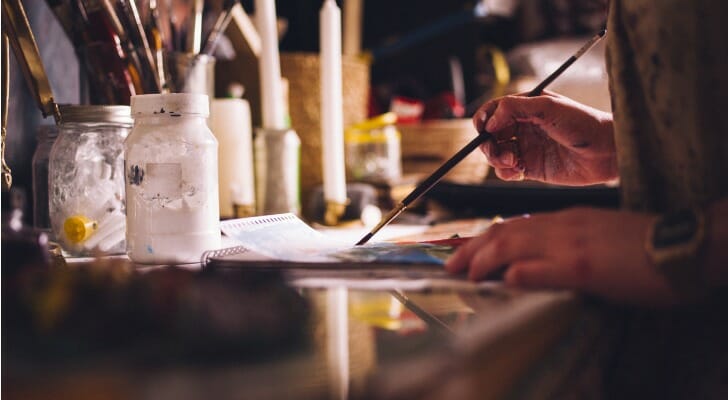 Some people just have creative juices flowing through them. They need to use their creative instincts all the time, and some are lucky enough to use those talents to make their living. After all, you have to be able to work to build up your savings account, but many creative jobs aren’t as high-paying as jobs in other fields. Some places, though, are more suitable to creatives than others. A combination of lots of job opportunities in creative fields and a low cost of living combine to make a great metro area for creative types. SmartAsset has combined these two metrics to come up with a list of the best metro areas in the U.S. for creatives.

To find the best places for creatives, SmartAsset considered data for 181 metro areas. We compared them against these two metrics: concentration of creative jobs and cost of living. For a full explanation of our data sources and how we analyzed the information, see the Data and Methodology section below. 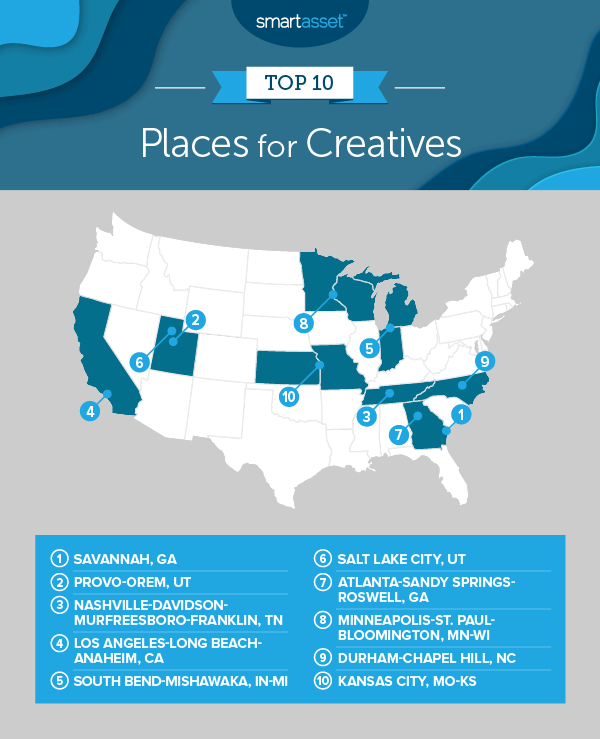 Savannah, Georgia is said to be filled with Civil War ghosts, but those stories might provide inspiration for the area’s many creative professionals. Approximately 110 per every 10,000 workers are employed as creative workers. Some of that could be due to the presence of the Savannah College of Art and Design, one of the best art schools in the country.

The most popular creative job in Savannah is acting. Interestingly,  Georgia has become a sort of Southern outpost of Hollywood in recent years. There are also many people employed as interior decorators and graphic designers.

Savannah also has the lowest cost of living in our top 10, according to SmartAsset’s cost-of-living index.

Provo, Utah is the home of Brigham Young University. The surrounding metro area has the second-highest total number of people employed in creative jobs in our top 10, approximately 115 per 10,000 workers.

Some of the popular creative jobs in this metro include graphic designers and postsecondary arts teachers.

This Tennessee metro area has the third-lowest cost of living among any of the entries into our top 10. It is on the lower end of our study’s top 10 in terms of creatives in its workforce, but there are still plenty of employment opportunities in artistic fields.

Working as a singer or musician is the leading job that creatives in the Nashville metro area have. Nashville is known as the Music City and is the home of the country music industry, so it makes sense that the home of a legendary honky-tonk scene would have so many musical professionals: 1,920, to be exact.

The first thing to note about the Los Angeles, California metro area is that it does not have an affordable cost of living. It is by far the most expensive city in our top 10, at almost 50% above the national average. Creatives who live here might be able to see a trade-off to relatively high expenses in the fact that Los Angeles has the most people employed in creative jobs in our entire study. Unsurprisingly, the highest numbers are those in the visual and entertainment arts: 18,610 people are employed as producers and directors. There are also more than 13,000 graphic designers, more than 11,700 actors and approximately 9,700 film and video editors living there.

The South Bend, Indiana metro area is home to The University of Notre Dame, and it’s also home to the fifth-lowest cost-of-living index score in our top 10, approximately 2.3% lower than the national average. South Bend also ranks fifth for concentration of people employed in creative jobs, about 103 people employed in an arts-related profession per 10,000 workers. Postsecondary arts and drama teachers are the most popular creative occupations.

The Salt Lake City, Utah metro area has a lot of opportunities for the creatively-minded to make a living. The most popular job is graphic designer, with 1,670 employed in this profession. There are a sizable number of people employed as architects too, – 860 – as well as editors and writers – 900 people combined. Salt Lake City does have the third-highest cost-of-living score in our top 10, however, at 2.80% above the national average.

The bustling Atlanta, Georgia metro area has plenty of people employed as creative professionals. The biggest market is for graphic designers, with 4,900 working in that field, followed by 4,240 people working as producers/directors. Approximately 2,200 people are employed as architects, and approximately 1,700 people have jobs as interior designers.

In terms of cost of living, Atlanta is fairly middle-of-the-road, having the fourth-highest score for our cost-of-living index in the top 10, almost 2% higher than the national average.

The metro area encompassing the Twin Cities and the Bloomington area across Minnesota and Wisconsin may be cold, but that doesn’t mean the creative juices can’t still get going. As with many of the cities on our list, graphic designers are very much in demand, with 4,820 people there employed in that profession. This metro area is also home to about 2,390 editors, along with 950 writers and authors. Cost of living, though, is fairly high – the second-highest in our top 10 and ranking within the top 25 of the total 182 places in our study –  at about 6% above the national average.

The Durham-Chapel Hill, North Carolina metropolitan area actually has three schools in it – Duke, the University of North Carolina and North Carolina State. It also boasts the second-lowest cost-of-living index score in our top 10. Its jobs score is not as good, coming in last in our top 10, at approximately 73 workers employed in creative professions per 10,000 workers.

Graphic designers and postsecondary arts teachers are both jobs with many opportunities. There are also more than 400 people combined across both professions.

The final entry on our list is the Kansas City, Missouri and Kansas City, Kansas metro area. This metropolis has the fourth-lowest cost-of-living rank (approximately 5% below the national average) but the second-lowest concentration of people employed in creative jobs (approximately 77 people per 10,000 workers) in our top 10.

Graphic design is again a popular gig, with 2,130 people with this job. There are 1,270 architects living in this area, followed by a concentration of 600 floral designers. 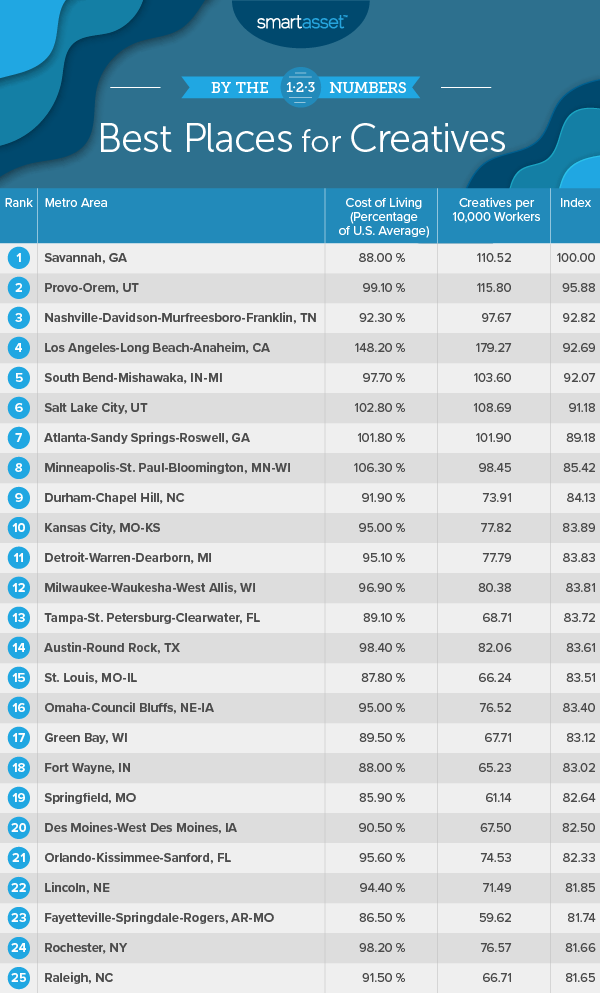 To determine our list of the best places in the country for creatives to live, we looked at 182 metro areas for which we had data. Specifically, we compared them across two metrics: