The Best Cities for New College Grads in 2018 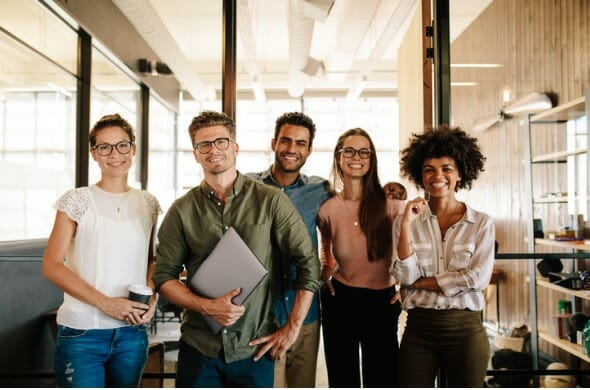 These days having a college education is not enough to ensure a financially secure future. According to data from the Census Bureau, over 30% of Americans over the age of 25 have a bachelor’s degree or a graduate degree. That means college graduates looking to get a professional edge need to move to the right cities. Cities that have plenty of jobs, low mortgage costs and a variety of entertainment options are good fits for new college grads.

In total we looked at 10 metrics across three categories: jobs, fun and affordability. To measure a city’s job score, we looked at overall unemployment rates, unemployment rates for those with a bachelor’s degree, average earnings for college graduates and the number of job listings on Indeed. For affordability, we looked at cost of living and monthly median rent costs. To measure fun, we looked at the concentration of entertainment and dining establishments, population aged between 20 and 29, the average rating for bars in the area and the average rating for restaurants in the area. Check out our data and methodology to see where we got our data and how we put it together. 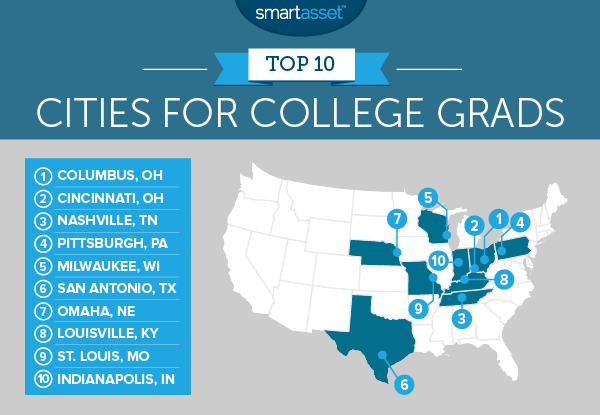 Columbus, last year’s second-best city for new college graduates, ranks as the top landing spot for 2018. This city is most notable for its affordability and access to job opportunities. Columbus’ cost of living is lower than the national average and is 12th-lowest overall in our study. Finding work in this city should be no trouble either. Only 1.5% of bachelor’s degree holders are unemployed in Columbus and overall only 3.8% of workers are unable to find work, regardless of their educational background.

Of course, Columbus wouldn’t take the top spot without good all-around scores. This city is also filled with friend-making opportunities for all the 20-something college graduates. Around 20% of all city residents are between the ages of 20 and 29.

Last’s year top city, Cincinnati, slips down to the second spot for 2018. Cincinnati is an excellent option for recent college grads. For starters, new graduates moving to this city should be able to find affordable housing. According to our data, median rent in Cincinnati is only $570 per month making it one of the most affordable in the country.

To go along with the affordable rent is a low cost of living on other goods. We estimate that living in Cincinnati costs 4% less than the national average. This should leave college graduates in a good position to save for a down payment on their first home or a nest egg for their retirement.

Music City comes in third. Nashville is one of the most fun cities in our study, which is why it ranks so high. Overall this city scores a 95 out of 100 on our fun index. Most impressive is the high concentration of dining and entertainment establishments in the city. Our data shows that Nashville ranks seventh in that metric.

But Nashville would not rank so highly if it only scored well in one category. Other than the good times available in Nashville, jobs are also relatively plentiful. The city has an overall unemployment rate of 2.7%.

The Steel City takes fourth. Pittsburgh offers a balance of affordability and fun. This city has the fourth-lowest cost of living in our data set and the fourth-highest percent of residents in their 20s. While the overall unemployment rate in the city is on the high side (4.9%), local college graduates are finding jobs. The unemployment rate for residents with a bachelor’s degree is 2.4%.

Another Midwestern city takes fifth. Milwaukee is a fun city which still manages to be affordable. Overall Milwaukee scores a 66 on our affordability index and an 86 on our fun index. Specifically it scores in the top 30 for concentration of entertainment and dining establishments. What makes Milwaukee so affordable is the availability of low cost rent. Our data shows the median rental costs only $680 per month.

San Antonio is the best landing spot in Texas for college graduates. This city has above-average scores across the board. San Antonio scores in the top 25 in an impressive five metrics. The standout scores are the overall unemployment rate and concentration of entertainment and dining establishments. For those metrics, San Antonio has the 23rd-best score and 21st-best score respectively.

Speaking of restaurants, the eating options around San Antonio are also popular. This city has the 20th-highest average Yelp score for restaurants.

For college graduates who want to put their head down, get a well-paying job and start saving for the future, Omaha is tough to beat. Only 1.4% of bachelor’s degree holders here are unemployed. In fact, the economic situation across the city is promising. Only 3.2% of residents are unemployed.

Omaha also has an overall cost of living that’s less than the national average and the average rental unit costs only $710 per month.

Louisville owes its eighth-place ranking to its affordability. Overall the cost of living in this city is only 1% higher than the national average. Plus, data from the Census Bureau shows the median rental in this city costs only $640 per month.

Louisville also gained ground on other cities thanks to the relatively high salaries college graduates in the city earn. The average college graduate in this city earns over $49,000 per year, the highest in our top 10.

St. Louis’ most impressive score comes in its housing costs. With median rent in cities like Arlington, Virginia and San Francisco costing well over $1,700 per month, the fact that the average rental unit in St. Louis is priced at just over $600 is remarkable. Perhaps it is especially enticing for college graduates looking to pay down student debt.

Indianapolis, another affordable, Midwestern city, closes out the top 10. Overall this city ranks 23rd in affordability, with low rent costs and costs of living roughly equal to the national average. 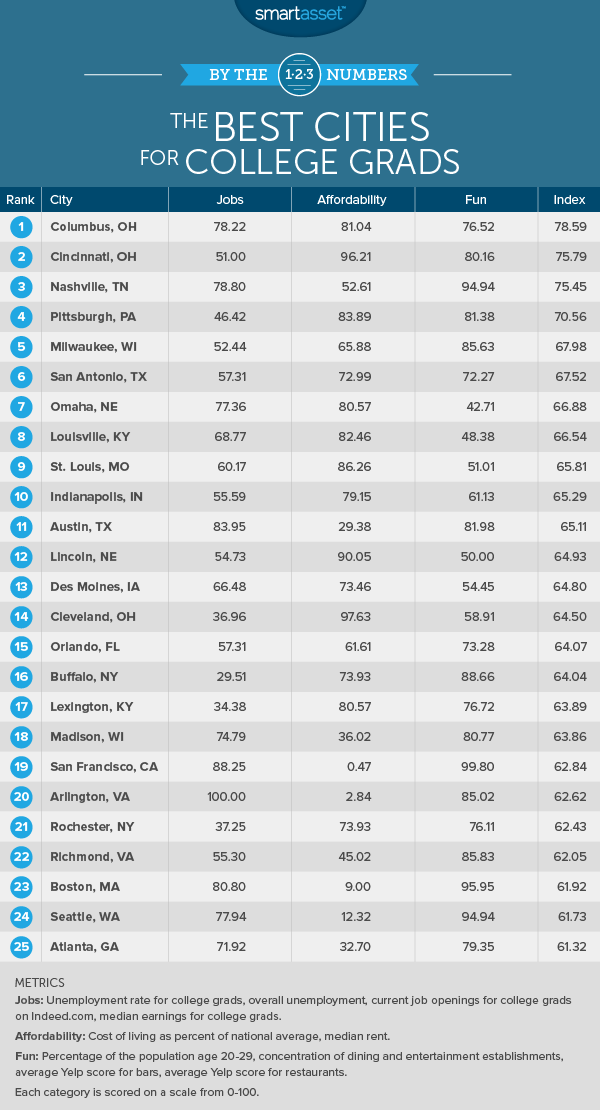 First, we ranked each city for each metric. Then we found each city’s average score in each metric. Using the average scores, we created an index score in each of the three categories. For example, the most affordable city would get a 100 in affordability, the least affordable a 0. To create our overall index we found the average of the three indexes.