The Best Cities for New College Grads in 2017 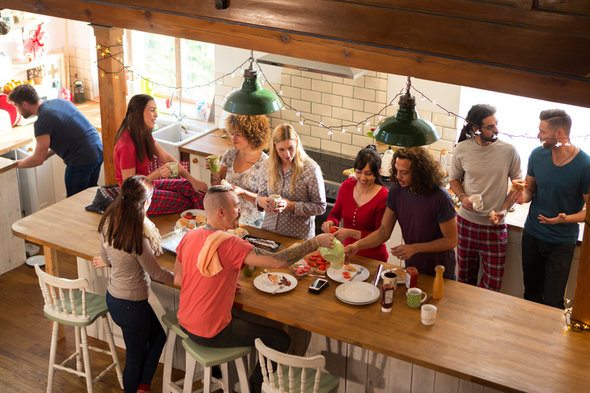 For many, going away to college provides the chance to live a life without parental restrictions like curfews and allowances. But after those four years are up, an even bigger change lies ahead for new college grads. Unless you move back in with your parents, a life of buying your own groceries and paying rent and utility bills awaits you. For the third consecutive year, SmartAsset took a look at the best cities for new college grads.

We looked at the 108 largest cities in the U.S. and considered how each would suit a recent college grad. Using a number of metrics found below, we ranked each city according to how affordable, fun and job-friendly it is.

This is the most recent study of best cities for new college grads. Check out our 2016 study. 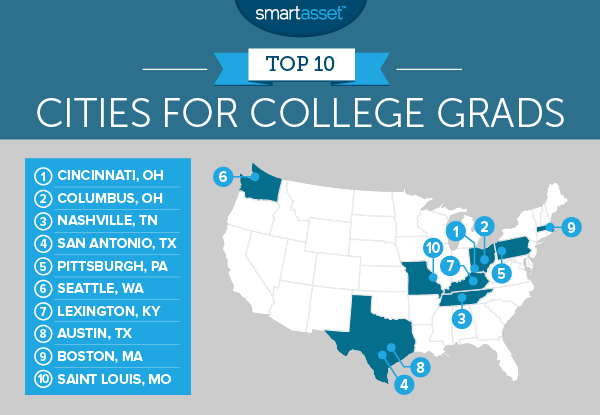 Cincy must be doing something right since it snagged the no. 1 spot on our list again this year! Cincinnati mostly boasts an affordable city, ideal for new college grads who may not have too much money in the bank yet. With average rent at $555, Cincinnati has the lowest rent numbers in the top 10 and the fourth-lowest out of all the cities we looked at. Their cost of living lies at about 3.5% below the national average, as well.

College grads will also be glad to hear that the unemployment rate among those with bachelor’s degrees has gone down while the earnings for college grads has gone up. That may give you more money to spare on the increasing number of entertainment and dining places in the city.

By jumping up one spot from last year, Columbus clinches the top two spots for the state of Ohio. The Discovery City was able to make its way up largely because of its beneficial job market. The unemployment rate among people with bachelor’s degrees decreased by 0.5%, although the overall unemployment rate has gone up slightly. But luckily, those with degrees are making more than last year on average.

Columbus residents also have the 12th-best cost of living number overall, landing at 2% below the national average. With money to spare, you can hit up a number of entertainment and dining spots in the Indie Art City. Plus, about 20% of Columbus’ population is in their 20s so you’ll have friends to mingle with and meet.

Nashville makes a huge jump this year, all the way up from the 12th spot in last year’s ranking. Nashville’s numbers saw big improvement when it comes to jobs, affordability and fun. With an unemployment rate of 1.5% among bachelor’s degree holders, Nashville boasts the sixth-best ranking in that factor. It also holds the 14th-best overall unemployment rate at 3.6%.

While the city’s cost of living is about 5% higher than the national average, residents will be happy that it has gone down from last year. The Music City has a lot to offer young residents with the fourth-highest concentration of dining and entertainment establishments.

San Antonio impresses this year with solid scores across the board, not quite shining in any one metric. One of the Alamo City’s improvements, the unemployment rate among bachelor’s degree holders saw a 1% decrease from last year. There are also more job postings on Indeed than last year, providing recent college grads with more job opportunities.

Down three spots from last year’s study, the Pittsburgh job market could be to blame. The city saw a slight spike in unemployment for everyone, including bachelor’s degree holders. Along with that drop, there are about 300 fewer job postings this year compared to last year’s study.

The Steel City scores strong in our other metrics, though, keeping it in the top 10. The cost of living has decreased, now at about 4% below the national average. In this metric it ranks fourth. Pittsburgh also offers affordable rent and the third-highest concentration of 20-somethings in the city. So you and your new friends can take advantage of the high percentage of fun businesses in the city.

Seattle was able to hold strong in the top 10, even moving up one spot. This Pacific Northwest city performs well when it comes to jobs, ranking seventh in unemployment and ninth in number of job postings. Seattle residents with bachelor’s degrees earn the 11th-highest salaries on average, $3,000 more than they did last year.

You might think that because Seattle’s 20-somethings are making a good amount of money that they’ll all be spending their earnings at the highly rated Seattle bars. While that’s an option, affordability isn’t Seattle’s strongest suit. The cost of living is about 28% higher than the national average. This number along with the high average rent in Seattle is behind only to Boston in the top 10.

Lexington moved up 11 spots from last year’s ranking. Residents with bachelor’s degrees are seeing more jobs this year, with the unemployment rate down by 2%, despite the drop in job postings. On average college grads are earning more than they were last year, as well.

Luckily, the rent remains affordable, landing Lexington in the top 25 in this metric overall. In fact, the overall cost of living is basically right at the national average, placing it as the 19th-best out of all the cities we looked at. That leaves you some nice space in your budget to head to the growing number of entertainment and dining businesses in the city. Plus, Lexington’s bars snagged the second-best Yelp scores in the top 10.

Home to the South by Southwest festival, it might be expected that Austin would make this year’s list again. In fact when it comes to new college grads, Austin has the 14th-highest population of 20-somethings out of all the cities we looked at. These college grads are earning the third-highest pay out of the top 10 as well, making their stay in Austin more affordable. The city’s pull definitely owes some credit to its restaurant scene. Austin restaurants must be serving up some amazing grub, since it holds the 10th-best Yelp scores overall.

When it comes to employment, Austin holds steady as well. Despite a slight increase in unemployment, Austin still ranks 14th in that metric. ATX also saw a drop of about 400 job postings from last year. Even though Austin was able to perform solidly against the rest of the top 10, its overall numbers caused its slight dip in ranking.

Boston came out of nowhere to land the ninth spot. Last year Boston ranked 44th with an unemployment rate of 4.2%, a high cost of living and high rent costs. This year, Beantown lands with the 11th-best overall unemployment rate and the sixth-most job postings overall. College grads are even earning more this year on average, the 16th-most overall.

Of course, Boston’s cost of living and rent weren’t expected to see a dramatic drop, although the cost of living percentage did drop. It’s worth noting that Boston still has the most expensive cost of living and highest median rent in top 10. At least you won’t be the only college grad paying high prices, since Boston has the fourth-highest percentage of 20-somethings living there.

Clinching the 10th spot is St. Louis, up from 29th last year. The Gateway City saw some great improvement this year in its unemployment rate for those with bachelor’s degrees, landing at 3.1% from last year’s 5.1%. This improved number is still the second-worst in the top 10. Additionally, its overall unemployment rate saw a small spike, landing it as the very worst rate in the top 10. College grads are also not earning the best wages in St. Louis, having the second-lowest numbers in the top 10, after Pittsburgh.

The rent in St. Louis isn’t expensive though, coming in at an affordable $580, the ninth-best out of all the cities we looked at. Pairing that with the average cost of living, recent college grads may love St. Louis’ affordability. 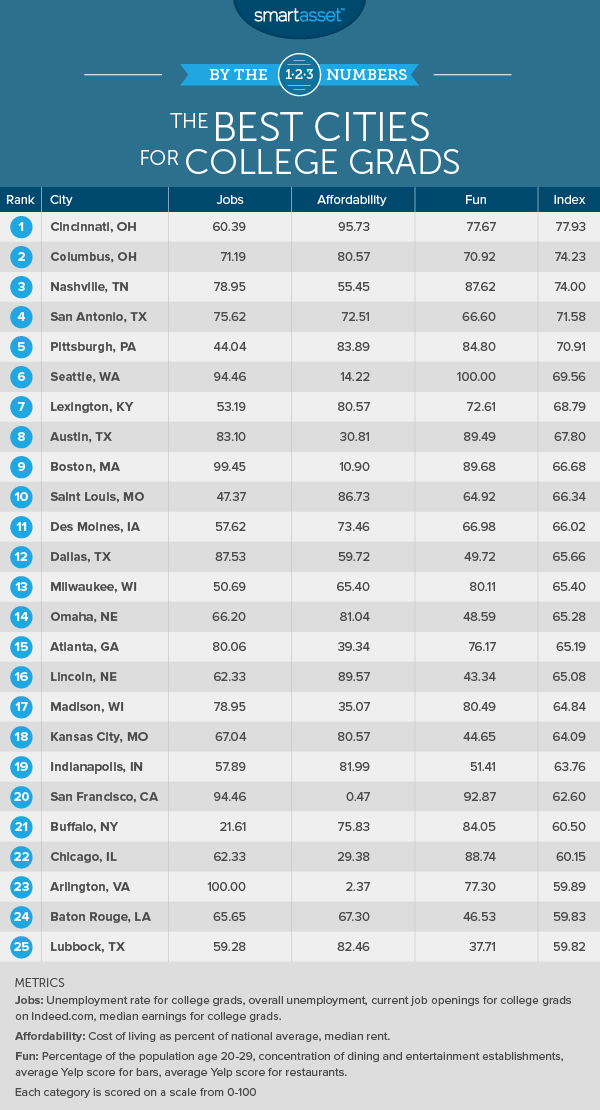 In order to find the best cities for new college grads, we looked at the 108 largest cities for which we had data. We calculated scores for these cities based on different metrics, found below. We grouped these metrics under three crucial categories in a new college graduate’s life: jobs, affordability and fun.

We calculated the data for all the above metrics for each city. Then we ranked each city according to the metrics included in each category. We averaged the rankings of those metric scores across each of the three categories. For example, the most fun city would earn a score of 100, while the least fun would score 0.

To find the overall index, we averaged the jobs, affordability and fun scores for each city.