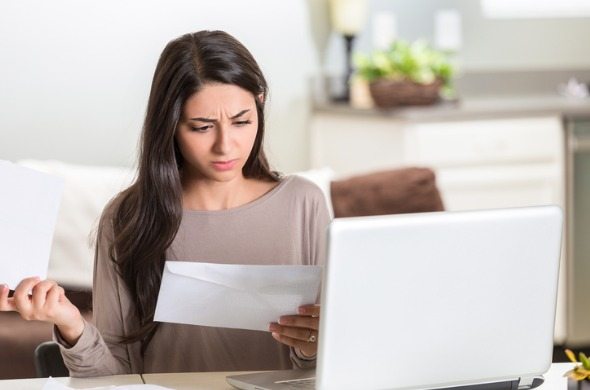 Does it feel like most of your paycheck goes to covering rent? You’re probably not alone. Data from the Census Bureau shows that over 46% of American renters are housing cost-burdened. But the scale of the problem changes depending on where you look. In California over 52% of renters are housing cost-burdened while in North Dakota that figure is just over 36%. The rent problem tends to be at its worst in the big cities. In order to highlight this problem, we looked the data to find the hours of work needed to pay rent in the 25 largest cities in the country.

Tip: Make sure you’re allotting enough of your paycheck toward your 401(k).

In order to find the cities where rent takes the most hours of work, we looked at data on three metrics. We looked at data on average hours worked per year, average earnings per year and average monthly rents. To see where we got this data and how we put it together check out the data and methodology below. 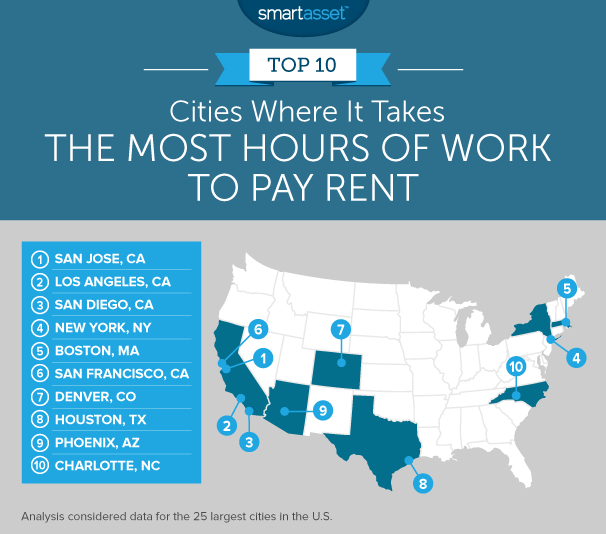 Despite having some of the highest-paid workers in the country, rents are still a burden for San Jose residents. The average worker here earns $47,030 per year but after taking out both federal and California income tax, that number is whittled down to $36,949.

Like San Jose residents, Angelenos have to contend with the steep California tax rates. That lowers their average take home pay of $30,800 to $25,300. After taking total hours worked into account, we estimate the average Los Angeles worker earns about $14.85 per hour. Comparing that to rent, which costs $1,315 per month, on average, we estimate that a Los Angeles worker needs to spend 88.6 hours at work to pay for rent.

California’s run in the top three continues with San Diego. The average San Diego worker takes home $31,600 after paying taxes. The typical San Diego worker spends about 1,750 hours per year at work, meaning they earn about $18.01 per hour. That’s over $3 more per hour than workers in Los Angeles make. But because average monthly rent in San Diego is about $240 more than it is in Los Angeles, the hours of work needed to pay rent in the two cities end up being pretty similar.

According to our data, the average San Diegan needs to put in 86 hours of work to pay for the average rent.

The Big Apple takes fourth. Steep state and local taxes take a big bite out of New Yorkers’ paychecks. Despite earning about $800 more before taxes than San Diego workers, on average, New York workers end up taking home about $1,200 less after factoring income taxes. We estimate that a single New Yorker who earns $40,240 (which is the median salary) will pay a total of $9,841 in income taxes. About $1,730 of that will go to the state government while $1,060 will go to the city.

On average, we estimate it takes the average New Yorker 79.6 hours of work to pay for rent.

The typical worker in Boston earns $32,677 per year after factoring taxes, which are pretty high in Massachusetts. That roughly equals $20.10 per hour after accounting for average hours worked per year.

According to Census Bureau data, the average rent in Boston is just shy of $1,500. To cover $1,500 while earning $20.10 per hour, you need to work about 74 hours. For the average Bostonian that is about two weeks of work.

Workers in Denver have about $14,000 less in net take-home pay compared to San Francisco workers. But thanks to much lower rents, renting in Denver is more affordable for the average worker than it is in San Francisco. In total we estimate that it takes just over 69 hours of work to pay for the average rental unit in Denver.

Houston workers pay the least in income tax on average, in our top 10. This is due to low average earnings and low income taxes. The Houston average worker earns just over $31,060 per year, and pays no state income tax. Despite Texas’ lack of state income tax and Houston having the lowest rent figures in the top 10, workers still need to put in 66 hours at work to cover rent. The average Houston worker takes home $14.36 per hour after taking taxes into account.

It’s a tight race for the last two spots in our top 10. Phoenix, in ninth, is separated from Jacksonville in 14th by less than two hours’ worth of work.

We estimate the average Phoenix worker takes home $14.59 per hour, after accounting for income taxes. Rent in this city costs $960 per month on average. That means to cover rent, the average Phoenix resident needs to put in just under 66 hours at work to pay for rent.

Our list ends in Charlotte. As we hinted at in the Phoenix section, it’s a tight race at the bottom. Charlotte edges out 11th-placed Dallas by about half an hour. Charlotte workers earn $28,900 on average after income taxes, which is equal to about $16.15 per hour. 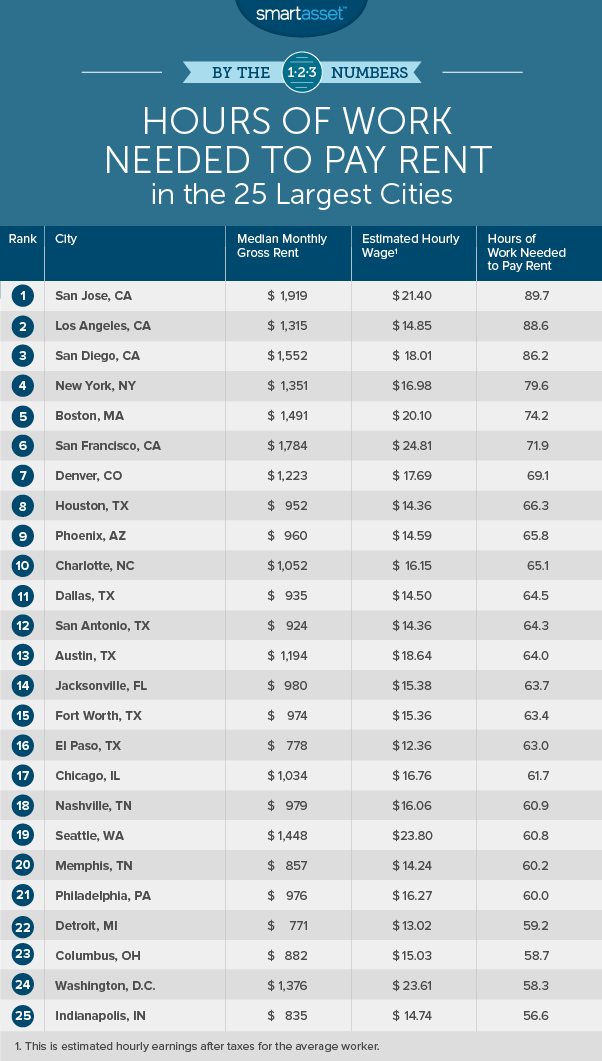 In order to find out how many hours of work are needed to pay rent in 25 largest cities in the country we looked at data on the following three metrics: