The Best Cities for Pay in STEM Jobs – 2016 Edition

The median pay among STEM workers in 2014 was more than $72,000. That’s more than double the median income among all occupations, according to Bureau of Labor Statistics data. Few would argue, however, that STEM workers are generally overpaid. Experts in the fields of science, technology, engineering and math are key contributors to economic growth. Furthermore, STEM occupations generally require years of rigorous and difficult training.

This is SmartAsset’s second annual study of the best cities for pay in STEM. Read the 2017 version here.

That being said, not all STEM workers are paid equally. In fact STEM pay varies greatly from one city to the next, in part because STEM employers and employees alike tend to cluster in certain parts of the country. Indeed, SmartAsset’s analysis of BLS data on STEM pay found that even among cities with large STEM workforces, median pay varies from as much as 40% higher than the national median to 15% below it.

In last year’s analysis of STEM pay, SmartAsset looked at 40 specific STEM jobs to find the best cities for pay in STEM. This year, we broadened our analysis to the three overarching STEM job categories as defined by the BLS: computer and mathematical occupations; architecture and engineering occupations; and life, physical and social science occupations.1 We considered any U.S. metro area with total employment across these three STEM categories of at least 30,000 – 54 metro areas in total.

Moving for a job? Figure out if you should rent or buy a home.

For each of those metro areas, we averaged the typical STEM pay across the three job categories. We also calculated the growth in pay from 2013 to 2014 (the most recent year for which data is available). 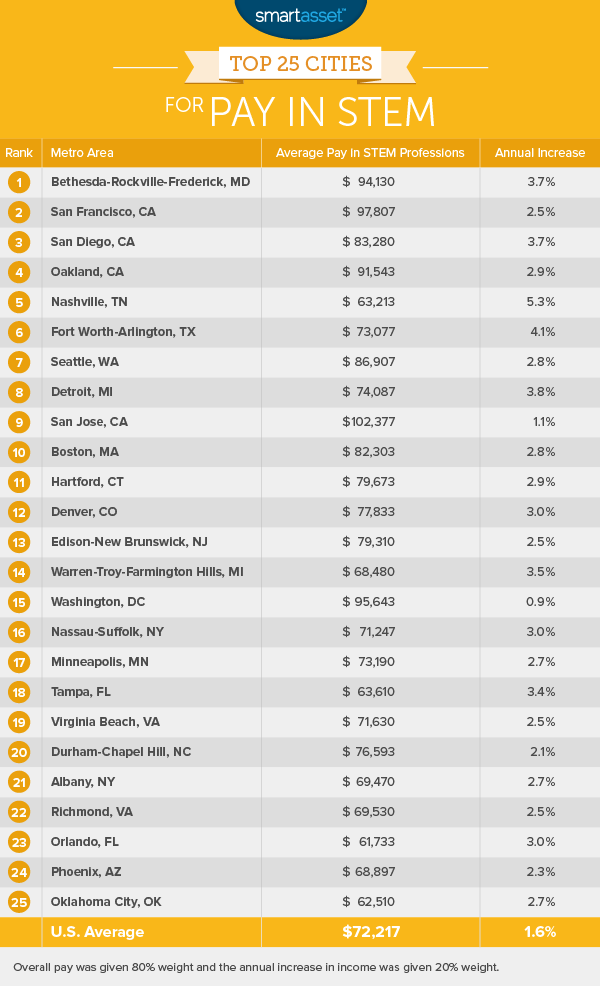 San Francisco has been transformed in recent years by a surge of investment in technology companies located in the city. There are 31 different STEM jobs that now have median income of more than $100,000 in San Francisco, tied with Washington D.C. for the highest number of six-figure STEM jobs of any city in the U.S.

The influx of well-paid tech workers has not been positive for all San Francisco residents, however. It has affected the city’s cost of living and led to stiff increases in rental rates.

Wondering what taxes are like in California? Read all about California income tax, sales tax and other taxes here.

With San Francisco’s office buildings becoming increasingly crowded, many employers are looking to the East Bay and its lower rates for commercial real estate. The ultimate example of this trend is Uber, the world’s most valuable venture-backed company, which has announced plans to open a large office in downtown Oakland.

That means more demand for STEM workers in the city, but it may also worsen the trend of skyrocketing rental rates in the Oakland area.

Music City had the strongest growth in STEM pay of any metro area in SmartAsset’s analysis. Income growth for STEM workers in Nashville was 5.3% in 2014, more than three times the national rate. Nashville’s STEM workforce is also one of the smallest in SmartAsset’s analysis, though that may change if STEM income and jobs growth remains as strong as it has been in recent years.

The Fort Worth-Arlington area has experienced strong economic growth in recent years. That has led to big pay increases for STEM workers, who saw incomes increase by 4.1% on average from 2013 to 2014. That’s the second highest STEM income growth rate of any city in the U.S.

While the median pay for STEM workers in Fort Worth and Arlington is not as high as in some of the other cities on this list, Texas STEM workers will bring home a larger chunk of their paycheck because of the state’s low taxes.

The Seattle area economy has long been buoyed by one or more major STEM employers, beginning with the rise of Boeing in the mid-20th century and continuing with Microsoft’s dominance of the software industry in the late 80s and 90s.

Today it’s online retail giant Amazon that is leading a STEM employment surge in Seattle. The company has hired tens of thousands of new employees in Seattle in recent years. That has been good for the incomes of STEM workers, but it has also pushed the city’s cost of living to new highs.

Pay for STEM jobs in the Detroit area increased by 3.8% in 2014, the third-highest level growth among the 54 metro areas in SmartAsset’s analysis. One driver of that growth may be the recent success of Detroit’s “big three” automakers (Ford, General Motors and Chrysler) who are posting some of their best years in history. Car sales reached a new peak in 2015.

The San Jose area – a.k.a. Silicon Valley – is the only U.S. metro area with average STEM pay over $100,000. Based on pay alone, there is no better place for a STEM worker than San Jose. However, the region saw below-average growth in STEM incomes in 2014. STEM workers in San Jose also face some of the highest living costs and highest taxes of any place in the country, with California tax rates as high as 13.3%.

There are at least 35 colleges and universities in the Boston area, including several of the best schools in the country. Yet Boston continues to invest in STEM education, with organizations such as the Boston STEM Network and the Northeastern University Center for STEM Education encouraging further research and investment in K-12 STEM education.

1. These three categories encompass STEM jobs such as software developer, petroleum engineer, physicist and mathematician. They do not include jobs in the healthcare industry, which the BLS categorizes separately.