The Best Cities for Pay in STEM Jobs – 2015 Edition 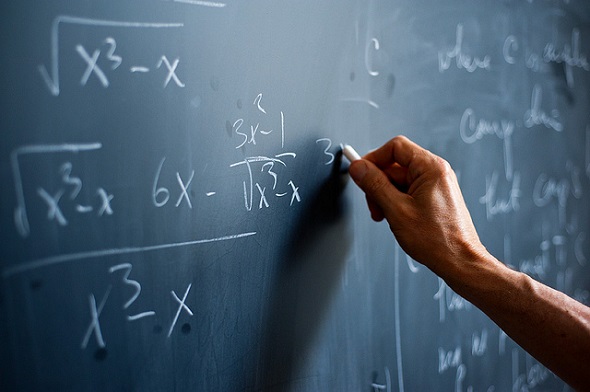 They call it the STEM gap: the disparity between the need for workers skilled in science, technology, engineering or math, and the number of graduates trained in one of those disciplines. It’s an issue that has received attention from no less than the President himself, and by most reports it’s only getting worse.

So why is the STEM gap such a big deal? After all, you don’t hear the President talking about the shortage of truck drivers (though the U.S. is suffering from one of those as well). For starters, STEM workers are hard to replace. While a lack of truckers may encourage more companies to ship by rail or sea, there isn’t any such alternative for a shortage of, say, aerospace engineers. Which underscores the real issue here: STEM workers have unique skills that require years of highly specific (and often expensive) training.

For that reason, a majority of efforts to address the STEM gap have focused on education: training more STEM teachers, creating special STEM programs and scholarships and generally encouraging more students to pursue a degree in science, technology, engineering or math. If more students are studying STEM, more graduates will have STEM training. That’s one way of looking at it, but the economics of supply and demand suggest an alternate solution: pay STEM workers more. Higher pay, in addition to strong benefit programs like an employer-sponsored 401(k), will incentivize greater numbers of people to pursue careers in STEM, and the gap will gradually close.

In some areas, the economic push to better remunerate workers in science, technology, engineering and math may already be underway. SmartAsset analyzed the data to find the best cities for pay in STEM.

Using data from the Bureau of Labor Statistics, we found the average pay for 40 different STEM professions in over 400 of the country’s largest metro areas. We considered fields ranging from computer programming and nuclear engineering to wildlife biology (the full list is at the end of the article). We did not consider healthcare jobs, which, though they often require a background in science, are usually considered separately from the core STEM fields.

Since we wanted to find areas with strong job markets in all four of the STEM disciplines, we eliminated any metros that did not have income data for at least 20 of the 40 STEM professions we considered. In general, these were smaller areas in which STEM jobs are harder to come by.  Of the remaining 87 metro areas, we calculated the average pay across all STEM jobs in the area. 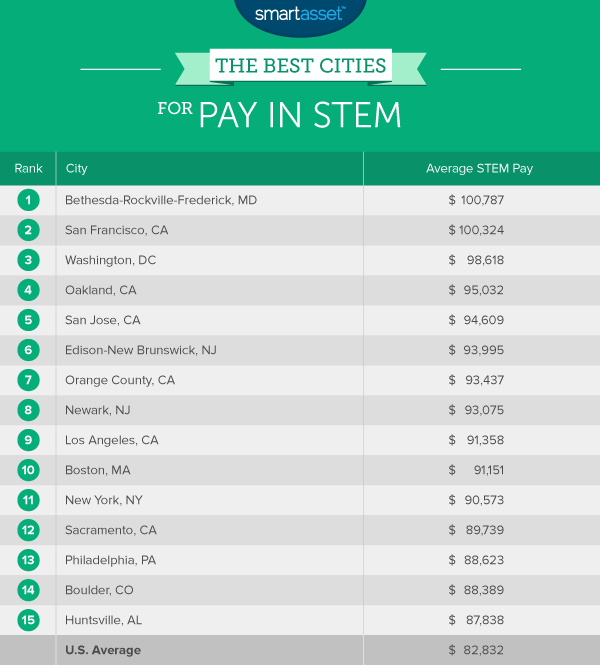 Located just northwest of the District of Columbia, the Bethesda-Rockville-Frederick metro area is home to the National Institute of Health as well as Lockheed Martin, one of the largest military contractors in the world. That means that, despite the area’s relatively small population, there are plenty of well-paying jobs for STEM workers. According to our analysis, there are at least 13 different STEM positions that pay over $100,000 per year on average in the Bethesda metro area. And that’s not all Bethesda has going for it: it is also home to the state of Maryland’s healthiest housing market.

While many of its most well-known companies are tech startups, San Francisco also has a strong market for workers in engineering and the sciences. There are a large number of small and mid-sized biotech companies in the San Francisco-San Mateo-Redwood City metro area, which may contribute to the high pay for the area’s chemical engineers.

The U.S. government may be the single largest employer of mathematicians and scientists in the world. Many of these jobs are located in the nation’s capital, which is home to headquarters of (among other offices) the U.S Army Corps of Engineers and NASA. Add to that the plethora of defense contractors with offices in the D.C. metro area, (which includes Arlington and Alexandria, Virginia), and you have one of the best job markets for STEM workers in the world.

As one of the largest ports in the country, the Oakland-Fremont-Hayward area is home to a large number of manufacturing plants, as well as a thriving ship-building industry. Unlike its Bay Area neighbors, it isn’t known as an international tech hub, though that may be changing: in late 2014, reports surfaced that several tech companies may soon be moving into renovated space in Oakland’s Sears Building. Why? It may have something to do with the East Bay’s relative affordability as compared with San Francisco and San Jose,  two of the least affordable housing markets in the country.

The original capital of the high-tech industry, the San Jose-Sunnyvale-Santa Clara metro area is home to some of the biggest tech companies in the world. These companies are not only in constant need of programmers and software developers to create their products, but mathematicians and scientists to hone the thinking behind the code.

As the hometown and namesake of one of the greatest scientists of all time, it is fitting that Edison and nearby New Brunswick have emerged as one of the top destinations for STEM workers. Located less than an hour from New York City, the Edison area is home to regional research offices for several international STEM companies, and serves as the global headquarters for Johnson & Johnson.

Orange County, which encompasses the cities of Santa Ana, Anaheim and Irvine, sits just to the south of Los Angeles, and in recent years has emerged as a hub for high technology companies in Southern California. Irvine has long been a destination for STEM workers and companies alike, thanks to the presence of UC-Irvine, one of the top public research universities in the world.

Located ten miles from downtown Manhattan, the Newark-Union, New Jersey metro area boasts the largest port in the greater New York area. It is home to the headquarters of several major tech companies, including Audible.com, as well as the New Jersey Institute of Technology, the Garden State’s premier technical college. Newark’s relatively low cost of living makes it an attractive option for STEM workers in the New York area.

While Los Angeles may be associated with the big screen more than computers and calculators, the numbers prove that LA is one of the top areas for STEM workers in the country. The average STEM job in the LA area pays $91,358 per year, or about 1/164th what Russell Crowe supposedly earned pretending to be a mathematician in A Beautiful Mind.

As home to two of the world’s truly elite universities, the Boston-Cambridge-Quincy area has long been a destination for top-flight mathematicians and scientists. Harvard alone boasts over 40 Nobel Laureates among its faculty and alumni, many of them in such STEM fields as chemistry, physics and economics. Along with its historical strength in academia, the Boston area has emerged as one of the country’s leading regions for biotech.

New York City is the nation’s economic capital, with most of the country’s major financial firms headquartered in Manhattan. That presents plenty of lucrative opportunities for mathematicians and statisticians, but scientists and engineers should have no trouble finding a job in the Big Apple either. By our calculations, there are over 110,000 STEM workers in the New York-White Plains-Wayne metro area, second most in the country behind Washington, D.C.

California’s state capital offers a strong environment for STEM workers. Rocket-engine manufacturer Aerojet Rocketdyne, which designs the propulsion engines for many of NASA’s shuttles and launch systems, leads the way, employing hundreds of engineers at its Rancho Cordova headquarters. The Sacramento-Arden Arcade-Roseville area is also home to offices of a number of notable computer companies, including Apple and chip-maker Intel.

Home to several major colleges and universities, Philadelphia is an epicenter for research in science and technology. The University of Pennsylvania (better known as UPenn) is a member of the Ivy League, and was founded by no less than Benjamin Franklin, experimenter extraordinaire, and inventor of every lab scientist’s favorite accessory: the bifocal.

Boulder has been gaining recognition in recent years as a top destination for tech startups. It has a great business environment, a highly skilled workforce and a high quality of life. With both the University of Colorado and the National Center for Atmospheric Research calling Boulder home, aerospace engineers in Boulder earn a higher average salary than in any other city in the country.

With the presence of the Redstone Arsenal, where the Army tests and develops many of its missile programs, the Cummings Research Park, which is the second largest science and engineering research park in America and NASA’s Marshall Space Flight Center, Huntsville is the STEM capital of the south. There are ample opportunities for engineers and scientists in the region, with STEM jobs paying an average of over $87,000 per year.

Here is the full list of STEM Fields we considered in our study: