The Best (and Worst) Cities for Teachers 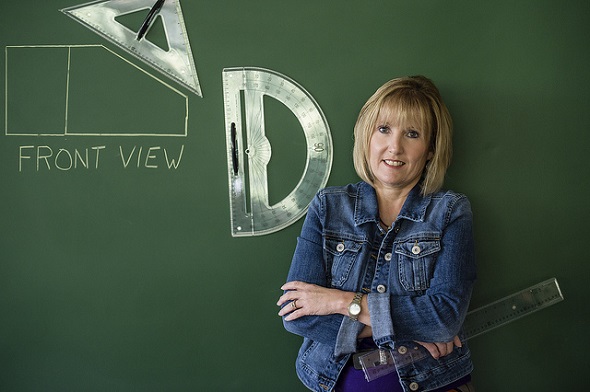 According to the National Center for Education Statistics, as of fall 2012 there were roughly 3.7 million full-time elementary, middle and high school teachers in the U.S. To put that number in context: there are more teachers in America than police officers, physicians, therapists, lawyers, social workers and postal workers combined.1 When you consider the influence teachers can have on their students’ lives, it is no exaggeration to say that teachers collectively hold the most important job in the country.

Yet, for all its importance, that job can at times be less than rewarding. Indifferent students, obnoxious parents, poor pay, a lack of resources; these are among the reasons that teachers often report low levels of job satisfaction. Indeed, a national 2012 survey of teachers found that only 39% were “very satisfied” with their jobs, and more than half felt that they were “under great stress” several days a week.2

We wanted to find cities in which teachers enjoy good pay, long-term job security and a positive work environment. To do so, we first collected data on teacher income and employment in major metropolitan areas, limiting our focus to areas with at least 5,000 teachers. We then looked at the largest school districts in the principal cities of each of these areas. In all, we collected data on five different factors: 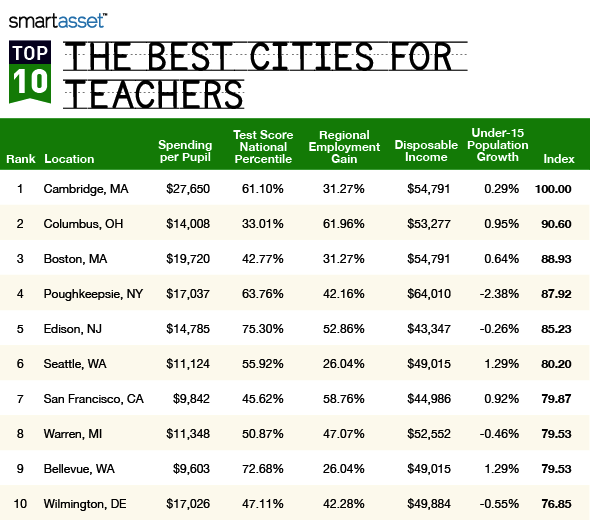 Home to Harvard, M.I.T. and the thousands of current and future PhDs that work and study at those august institutions, Cambridge is a city that recognizes the importance of high quality education—and high quality educators. While Cambridge had an average ranking of 25.8 (out of 116) across the five factors we considered, its highest ranking was for district spending. With annual per pupil spending of $27,650, Cambridge School District ranked first overall in that category, so teachers in Cambridge can be sure to have the books and supplies they need to lead their classes effectively. That, along with the high disposable income enjoyed by teachers in the area and strong student test scores (8th highest overall), make Cambridge the most teacher-friendly city in America.

The largest city in Ohio is also among the best destinations for teachers. The Columbus metro area ranked in the top 25 for both hiring and student-population growth, and the Columbus City School District ranked 25th for per pupil spending, with the district spending an average of $14,008 for each student it educates, according to the U.S. Census Bureau.

Across the Charles River from the top ranked city in our study, Boston likewise benefits from a strong academic culture. Boston University is the city’s fourth largest employer, and Northeastern University, Boston College and U-Mass Boston also have campuses in the city. As a result, the city places a strong emphasis on education: the Boston School District’s per student spending of $19,720 was sixth overall in that category, and teachers in the Boston-Cambridge-Quincy metropolitan area enjoyed the 22nd highest disposable income of any city in our study.

The smallest city to make the top ten, and one of the smallest in our study, Poughkeepsie may be the perfect place for teachers who don’t want to live in a big city. Teachers in the Poughkeepsie metropolitan area have an average disposable income of over $64,000 – highest in our study. The Arlington Central School District, which is the largest district in the area, spent an average of $17,037 per student, 14th highest overall (the smaller Poughkeepsie City School District fared even better, with per pupil spending of over $19,000).

In 1954, the township of Raritan renamed itself after its most famous son, Thomas Edison, inventor par excellence, who did much of his tinkering in Raritan’s Menlo Park neighborhood. Today, students in Edison Township seem to be intent on emulating The Wizard of Menlo Park: the Edison Township School District had the highest average math and reading test scores of any city we examined.

The top-ranked west coast city in our study, Seattle rated in the top 50 in four of the five factors we considered. It was in the top half of cities for per pupil spending, district test scores, average disposable income and student-population growth. Seattle is also home to one the country’s best high school jazz bands: the Garfield High School Jazz Band has won the Essentially Ellington National Jazz Band Competition four out of the past twelve years, and placed second twice.

One of just two cities in the top ten not located on either the east or west coast, Warren rated especially well for teacher employment growth. It was 19th overall in that factor, with the Warren-Troy-Farmington Hills metro area adding over 5,000 teachers since 2011, according to the Bureau of Labor Statistics.

Teachers who are looking to move to the Bay Area should have little trouble finding a job there in future years. The San Francisco-San Mateo-Redwood metro area had the ninth highest rate of teacher employment growth of the cities we examined, and the 17th highest rate of student population growth.

Across Lake Washington from 6th ranked Seattle, Bellevue routinely receives accolades for its high quality schools. Unsurprisingly, the Bellevue School District had the second highest math and reading test score average of the cities in our study.

The 10th best city for teachers, Wilmington rated 15th overall for per pupil spending. On average, the Christina School District (named for the river that passes through Wilmington), spends just over $17,000 per student, according to the U.S. Census Bureau. 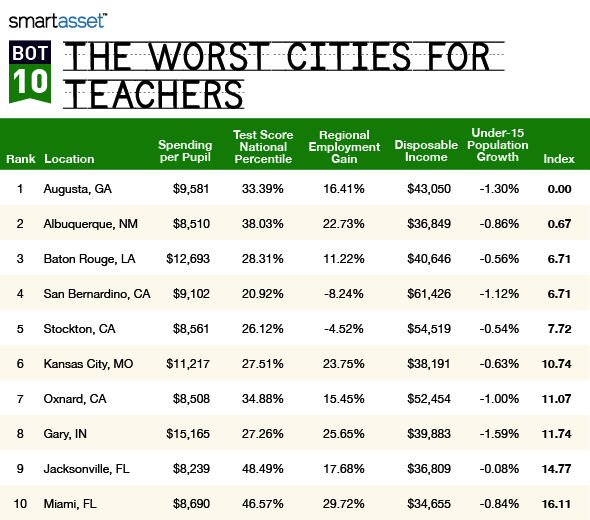 With an average ranking of 85th across the five categories we considered, Augusta, Georgia was the least teacher-friendly city in our study. The Augusta metro area is especially notable for its low rates of teacher-employment growth and student-population growth. It rated 97th and 107th respectively in those two categories.

Teachers in the Albuquerque metro area were among the most poorly paid of any city in our study. On average, they made $45,165 as of 2013, but when factoring for the cost of housing in Albuquerque, disposable income for a typical teacher could be as low as $36,800.

The results for San Bernardino are in some ways contradictory. On the one hand, teachers in the Riverside-San Bernardino metropolitan are among the most highly paid in the country, with an average disposable income of over $60,000. On the other hand, the area has actually been losing teachers in the past few years: teacher employment fell by over 8% from 2011 to 2013, the third highest rate of employment loss of any area in our study.

In the most recent district report card released by the Louisiana Department of Education, Baton Rouge had more failing schools (16) than schools receiving an A (11). As a whole, the East Baton Rouge Parish School District averaged a C grade, lower than the state average B. One potential avenue for improvement is higher teacher pay: teachers in Baton Rouge make an average of $49,238, and their disposable income ranked 93rd out of the 116 cities in our study.

The 2012 municipal bankruptcy filing in Stockton has forced the city to make cuts in many parts of its budget, and the area’s teachers have not escaped the repercussions. According to the Bureau of Labor Statistics, the number of teachers employed in the Stockton metro area fell by over 4% from 2011 to 2013.

Though Oxnard resides in one of the wealthier parts of the country, its teachers and students have by-and-large missed out on the benefits of that wealth. Per student spending is just $8,508 in Oxnard, according to the U.S. Census Bureau, 24th lowest of any city in our study.

An industrial town located on the southernmost shores of Lake Michigan, Gary’s population has fallen by over 50% since the 1960s. More relevant to our study, however is what’s happened to the under-15 population, which has fallen 1.5% annually in recent years. This trend may limit long-term job prospects for the city’s teachers.

The most populous city in Florida (though not the most populous metro area) Jacksonville rated especially poorly for teacher pay and spending per student. It ranked 104th and 96th respectively in those two categories.

Like those in Jacksonville, teachers in Miami are not particularly well-paid. Disposable income for a typical teacher in the greater Miami area is around $34,600, 7th lowest of any city we examined.

2. Survey data from the MetLife Survey of the American Teacher, conducted by Harris Interactive, available at metlife.com/teachersurvey.