The Top 10 Cities with the Largest Rent Increases 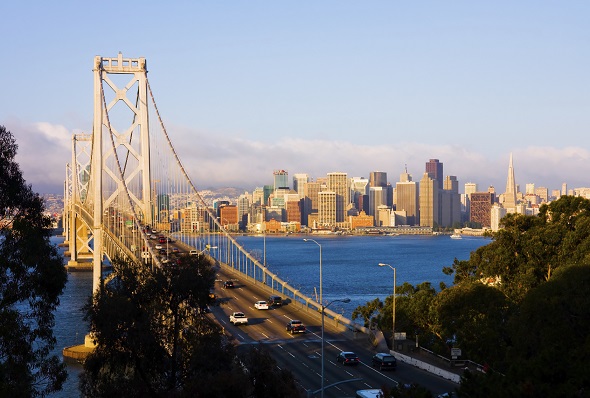 Rent increases have become a fact of life in many of America’s largest cities. The question is no longer whether or not rent will increase, but by how much. There are numerous potential causes for this state of affairs, including population growth, housing shortages and increasing incomes. Yet none of it changes the fact that in many cities, families are being priced out of their homes.

Find out now: Is it better to rent or buy in your city?

So where is this situation most dire? To answer that question, SmartAsset looked at rent data from RentJungle.com and income data from the U.S. Census Bureau. For every major city in the United States, we calculated fair market rent as a percentage of median income in 2011 and 2014. We then found the cities where that rent-to-income ratio has increased the most.1 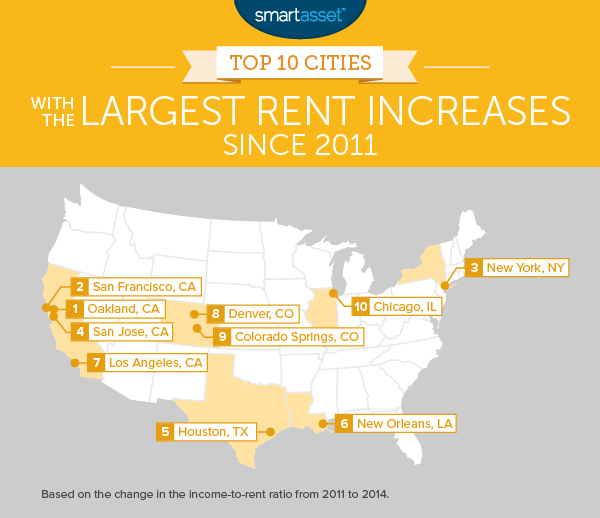 The East Bay was once an oasis of affordability in the otherwise pricey Bay Area. No longer. According to RentJungle.com, fair market rents in the Oakland area have nearly doubled since 2011. Meanwhile, median income in Oakland has increased by 11.3%, a significant amount but not nearly enough to compensate for the skyrocketing rental rates.

No city in the country has higher average rent than San Francisco. According to RentJungle, the average fair market rent in San Fran in 2014 was $3,395 (which includes both one- and two-bedroom apartments.)  That represents an increase of nearly $1,300 since 2011.

Meanwhile, the average home price in San Francisco now exceeds $1,000,000. So, while San Francisco families may have once been able to decide if it made more sense to rent or buy, many may now be finding themselves priced out of both markets.

While NYC no longer has the highest rent in the United States, it remains the most unaffordable U.S. city for its residents. Fair market rent in New York is equal to 72% of median income, an increase of 10% since 2011. Needless to say, that is well above HUD’s recommended threshold for affordable housing.

There are a number of ways New Yorkers avoid paying these exorbitant market rental rates. Rent-stabilized and rent-controlled apartments offer a higher level of affordability to some residents. Likewise, living with one or several roommates is common for renters in throughout New York’s five boroughs.

As compared with the other three Bay Area cities on this list, San Jose’s rental market is fairly affordable for the city’s residents. As of 2014, fair market rent in San Jose was equal to 34% of median income, only slightly higher than the level recommended by HUD. That is in part because, at $87,210, San Jose has the highest median income of any major U.S. city.

The monthly fair market rent in Houston increased by about $250 between 2011 and 2014. That’s equal to an annual increase of $3,000. Over that same period, median income increased by $2,583 according to the U.S. Census Bureau – a significant amount, but not enough to cover the increased cost of rent.

While the change in the rent-to-income ratio in Los Angeles may seem small as compared with other cities in California, for families living on a fixed budget even minor increases in rent can be difficult to handle. The 2011 to 2014 increase in monthly rent of $269 in LA is equal to $3,228 annually. That’s an additional 3% of the typical household income in Los Angeles, where many other living expenses are already higher than the national average.

Spurred by strong population growth, Denver’s housing market has been one of the hottest in the country in recent years. That has spilled over to the market for rentals, where monthly fair market rents have increased by about $300 from 2011 to 2014.

The median income in Chicago grew by about $5,000 between 2011 and 2014, going from $43,628 to $48,734. Yet, despite that growth, households paying fair market rent will have less income left over after housing today than they did three years ago. That’s because rent over that same time period grew by 18.5%, according to data from RentJungle.

1. A note on the data: fair market rent is not equal to average rent. Fair market rent represents the average listing price for apartments that are available on the market and will therefore be higher than apartments that are occupied. Since places that are overpriced often remain on the market for longer, they will likely be overrepresented in this data. Average rent (the average amount renters actually pay) will therefore be lower than fair market rent. For one example, average rent in Oakland is most likely not equal to 70% of median income.