What Happens If a State Goes Bankrupt? 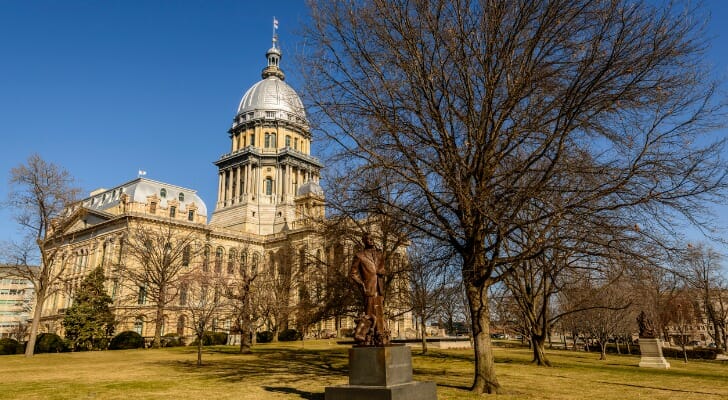 State bankruptcies have recently become an open question as the coronavirus pandemic shreds many states’ finances. But before that, the issue emerged in 2017 when the U.S. territory of Puerto Rico filed for bankruptcy. And even prior to that analysts were studying the deteriorating condition of state finances. No state has ever declared bankruptcy, though. And, with the exception of Arkansas in 1933, it has been nearly 150 years since any state defaulted on debt. There is no roadmap for what happens when a state goes bankrupt. We review how we got to this point, bankruptcy issues and possible ways forward.

As state and local governments have shut down businesses to prevent the spread of COVID-19, they have also ended much of the consumer activity that drives the U.S. economy. What spending remains has become more focused in online shopping – where businesses have never been great about paying sales taxes – and necessities like food and pharmaceuticals, which many states exempt from sales taxes. The result is that the sales tax revenue that states depend on has fallen off a cliff.

Meanwhile, massive unemployment has swept the nation, sucking away income taxes from the states that have one.

This one-two punch has left many states without the money they need to pay their bills and maintain basic services. While details are still coming in, many states report that they expect their tax revenues to decline by anywhere from 6% to 35% over the next year. This is a collapse worse than the Great Recession of 2008, which saw an average decline of 12.5% across all state budgets.

This comes at a time when populations need state spending more than ever. During a crisis, many of the first-response services in American life operate at the state level. State governments have funded a substantial portion of the U.S. coronavirus response, from healthcare facilities to emergency workers. They also fund many of the unemployment and social service systems that people rely on during an economic crisis, including a portion of all unemployment benefits paid to jobless workers.

The result is a surge in spending and a collapse in revenue. That’s a deadly combination for any budget, and it raises the specter of a financial crisis for states across the country. 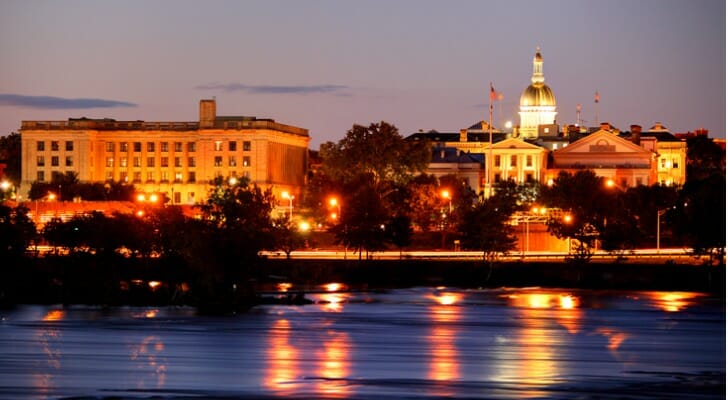 Bankruptcies are about fresh starts for people and businesses struggling to pay insurmountable debt. At a certain point it’s unproductive to continue squeezing debt payments out of an individual and business. Doing so might cripple a business that could otherwise survive, or ruin a person who’s already struggling with a rock-bottom credit score and trying to rebuild financially. Instead, a bankruptcy court will hold off creditors from taking the applicant’s property, review the finances of the bankrupt party and portion out their assets. The upshot is an individual or business emerging with a fresh start and carrying little, if any, debt.

Bankruptcy is different from default, which is when a debt payment is not made. People and businesses have a legal right to declare bankruptcy in many situations. They almost never have the right to default.

During bankruptcy, courts block creditors of the bankrupt entity from seizing the the debtor’s property. Instead a court reviews an entity’s assets. It might sell off assets that can be liquidated and pay as much debt as practical. The remaining debt is either reorganized into a payable form or wiped away completely. The details of bankruptcy vary by case. Individuals, who usually have low credit scores, and businesses have very different sets of bankruptcy laws, and different sets of laws govern depending on whether a business will end in bankruptcy or whether it will use this process to restructure its debt and carry on.

Cities have, on rare occasions, declared bankruptcy. The largest and most recent was Detroit in 2013. No state has ever done so, however. In part this is because almost every state has some sort of balanced budget requirement in its constitution. This means that they cannot take out debt to cover unfunded obligations, and as a result have rarely found themselves in a position to need bankruptcy protection.

Any effort to legalize state bankruptcy, or commence one, would likely spark numerous legal, economic and political issues.

While Congress can pass a federal law allowing states to take advantage of bankruptcy provisions, it’s possible that state constitutions would overrule federal statute on the matter of state budget directives. Regardless of whatever federal law Congress might pass, if courts find that state constitutions control the issue then those states might be required to balance their books without the bankruptcy courts.

Secondly, transferring a state’s budgetary power from the legislature to a federal court may not be permissible under the separation of powers doctrine in the U.S. Constitution, nor under the long-standing judicial principal of refusing to rule on inherently political questions.

Thirdly, the U.S. Constitution contains a section called the Contracts Clause. This bars states from breaching contracts with or between private citizens. This is to prevent states from abusing their control over the police and judicial system during contract disputes. It would apply to existing obligations, such as employment contracts and pensions. Any state bankruptcy law would need to deal with this potential conflict. Courts may find a law that lets states walk away from their existing obligations, as bankruptcy is designed to do, unconstitutional on this basis.

States are dealing with an unprecedented budget crisis brought on by a black swan event that has triggered a severe recession. In theory they could raise taxes to cover their revenue shortfall. However, doing so would make life more expensive for citizens already struggling with the same wide-reaching crisis.

They could also cut costs by laying off workers such as firefighters, police officers, teachers and civil servants, as state governments did in the wake of the financial crisis of 2008. However, that would add to the ranks of the unemployed and remove money out of increasingly weak consumer markets.

States have near-plenary power to raise revenue and cut spending. To prove bankruptcy under ordinary conditions, an entity needs to be “insolvent.” This means that their legal obligations must exceed their ability to raise funds. But the problem here isn’t actually insolvency. The issues are economic and political.

This would transfer a state’s budgetary power from the legislature to a federal court. If state bankruptcy matches the practice of municipal or corporate proceedings, a judge would oversee how the state restructures its obligations. This would give the court system final say over how the state spends its money, an inherently political decision.

The decision not to balance state budgets and instead file for bankruptcy is an inherently political act. It is a judgment of how states should best manage their spending burdens and tax powers, but it is not an actual limit on the state’s ability to shed its burdens or raise revenue. This would make a traditional bankruptcy review difficult, and would once again raise serious questions about the legality and legitimacy of any bankruptcy process. 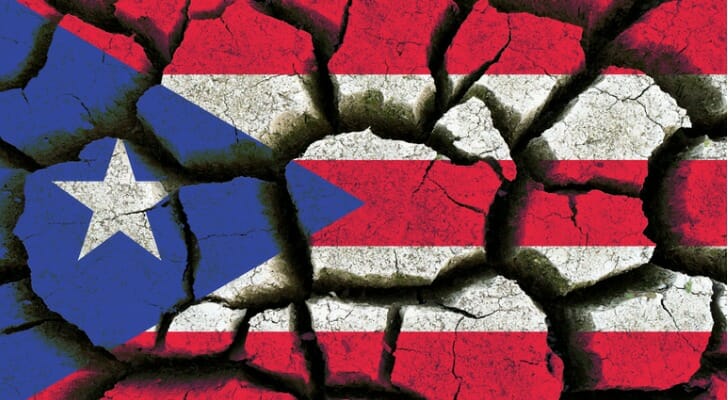 State bankruptcy might look like a municipal bankruptcy. In 2017 Puerto Rico initiated a form of municipal bankruptcy to restructure about $120 billion of liabilities and debt. Congress passed a law that resulted in the island’s finances being taken over by a fiscal control board, which was aiming to finish its work by the end of 2020. If states are able to file for bankruptcy, the process may look similar to Puerto Rico’s.

A court likely would review the state’s obligations, such as its payroll, contracts and future commitments. It would balance those against its assets, such as incoming revenue and any salable property. The court would have to decide which costs a state must cut, which revenue sources to prioritize. This involves setting the state’s policy priorities, choosing whether to preserve the jobs of teachers or firefighters, sanitation workers or accountants. A court or a court-appointed board – as is the case with Puerto Rico – would have to decide whether to sell state assets or raise revenue, questions typically left to a state’s voters and legislators. It would restructure some obligations, wipe away others, and overall restructure the state’s budget to a financially viable position.

Any bankruptcy would likely involve significant layoffs among state employees as part of cost cutting measures. It is difficult, if not impossible, to predict the categories of state workers who would be cut during this process. At the same time, reductions in pension obligations would cut the income of retirees. This would not only reduce consumer spending power but would also impose potential financial hardship on retirees and elderly former employees.

Balanced budget provisions in state constitutions notwithstanding, many states issue bonds to cover certain expenses. Most often states borrow to finance capital projects, with the debt secured by the underlying asset. In the light of bankruptcy, state credit ratings would collapse (as always happens with bankruptcy), almost certainly taking bond values with them. Beyond bond markets, the labor and consumer market would – again, almost certainly – take a hit as well.

In practice, however, no one really knows what this would mean. The details would depend on the laws Congress chooses to pass and how courts interpret their legality.

State bankruptcy is uncharted territory for the U.S. legal system. It’s hard to say if any federal bankruptcy law for state governments would actually be legal, and almost impossible to predict how it would work if enforced.

Tips for Navigating the Coronavirus Economy