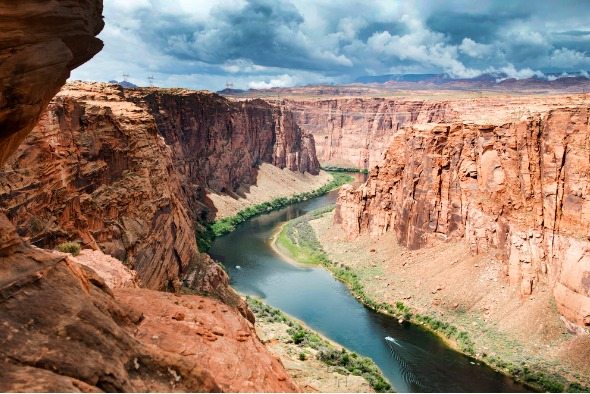 Visitors made 82 million trips to national parks across the United States in 2016, according to data from the National Park Service. That’s 17 million more visits than were made in 2012. But which national parks are the most beloved by Americans? Read on as we delve into the data to find America’s favorite national parks.

Thinking about taking a family trip? Check out the best travel cards.

In order to rank America’s favorite national parks, we looked at data on total hours spent in parks, total visitors, average hours spent per visit and visitors per acre of park. Check out our data and methodology to see where we got our data and how we put it together. 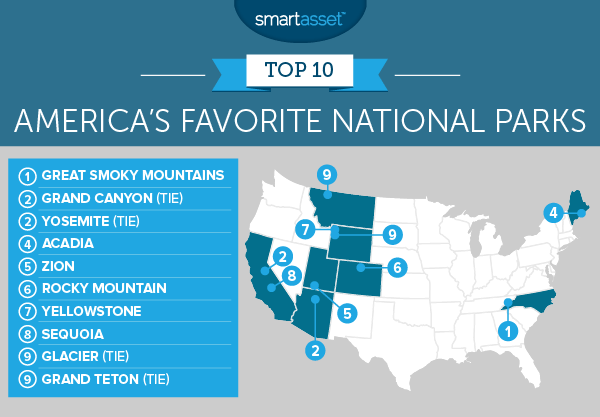 The Grand Canyon may be the most famous site in the United States but did you know it’s a national park? Although it had less total visitors than the Great Smoky Mountains, it led all national parks in total visitor hours. Our data shows that 5.9 million visitors spent a total of 94 million hours in the park in 2016. This means the average visitor spent just under 16 hours in the park.

Yosemite is tied with the Grand Canyon for second on our list of America’s favorite national parks. This park is famous for its unique granite rock formations, which make it great for rock climbers. Visitors also appreciate access to undisturbed nature.

In total over 5,000,000 people visited Yosemite in 2016. On average, visitors spent just over 15 hours in the park. Yosemite ranks in the top 10 for those two metrics.

Acadia is another one of America’s natural treasures. This park is located in eastern Maine and is the oldest national park east of the Mississippi. This is a great park to hike in, offering views of the ocean, pine forests, island lakes and the chance to interact with 40 types of mammals.

Acadia ranks highly due to its high visitor count. Over 3.3 million people visited the park in 2016, which is a huge number given its size. In total, this park had 29 visitors per acre, the third-highest rate. Arcadia is also relatively far out of the way for many Americans. If you are planning on taking a long road trip, make sure you are using the right travel credit cards to save money on your trip.

Zion National Park is located in the southwestern portion of the United States, near Springdale, Utah. The park is located at the junction of a few different ecosystems, like the Colorado Plateau, Great Basin and Mojave Desert, which allows a wide variety of plant and animal life to thrive. Many visitors come to hike a trail called The Narrows. This trail takes you through a canyon and can at times be dangerous, due to flash flooding risks.

Overall this park saw 4.3 million visitors, the fifth-most of any national park, in 2016. Those visitors spent just under 29 million hours enjoying the park.

In 2016, over 4.5 million people visited the park, making it the fourth-most visited national park in the country. The reason it ranks lower than the previous parks is because in general visitors do not spend quite as much time here as they do in parks. The average visitor spends only 6.8 hours enjoying the Rocky Mountains.

Yellowstone National Park consists of over 2.2 million acres of preserved land and straddles Wyoming, Montana and Idaho. This park is known for its geothermal geysers, the most popular of which is Old Faithful, a geyser which spews out boiling hot water at hourly intervals.

In total over 4.2 million visitors came to Yellowstone in 2016. This park was dinged in our ranking due to its size. It had only 1.91 visitors per acre.

This park has a plethora of hiking trails including the Sherman Tree Trail, as well as plenty of campgrounds. If you are planning on doing some camping in Sequoia, you may want to use a cash back credit card when you buy your gear. Camping gear can get expensive so you can get some of that money back if you have the right cash back card.

Glacier National Park, located in Montana, encompasses over 1 million acres. Many types of animals can be found in this park including grizzly bears, moose and the park’s mascot, the mountain goat. You can even find endangered species like wolverines or Canadian lynxes. This park ranked 10th in total hours as well as sixth in total visitor hours.

Closing out our list of America’s favorite national parks is Grand Teton National Park. Grand Teton had the ninth-most visitors in 2016. The northwestern Wyoming park gets its name from Grand Teton, the tallest mountain in the Teton mountain range. 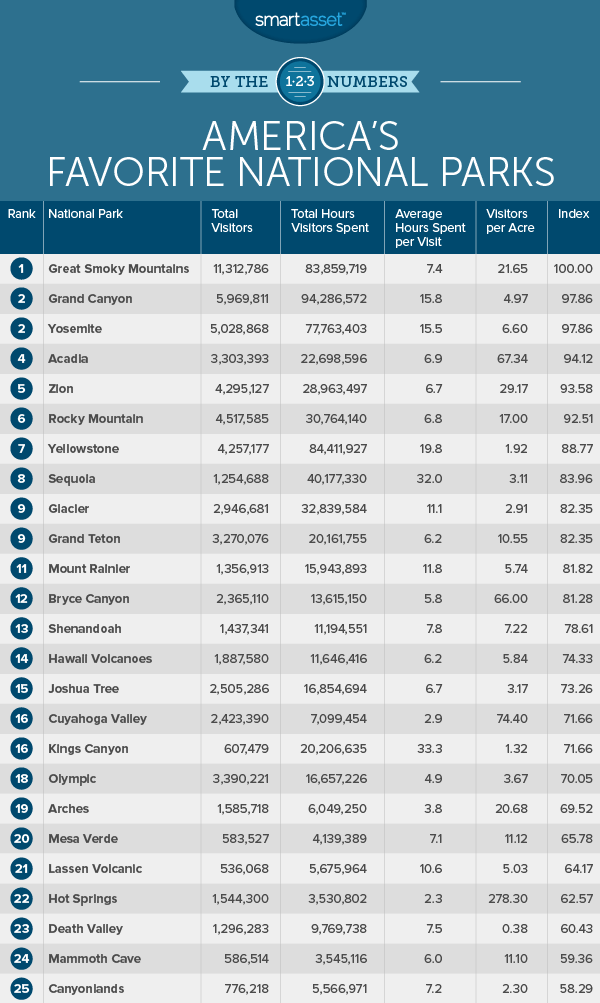 In order to rank America’s favorite national parks, SmartAsset looked at data on 58 national parks and compared them across the following four metrics:

Data for all metrics comes from the National Park Service and is from 2016.

Tips for Saving Money on a Family Trip

If you’re planning for a family vacation, whether it’s a camping trip to one of the national parks or flying across country to see relatives, costs can quickly add up. Here are some tips for saving.

If you’re going for a cross-country road trip, gas will be expensive. One way to save on gas is to make sure your vehicle is in tip-top shape before embarking. By giving your car a tune-up and making sure there is enough pressure in your tires you can improve fuel efficiency. You can also further your gas savings, by using the right rewards credit card.

You may want to buy snacks in bulk before you venture off. This will mean less money spent on eating out. If you plan on staying in hotels during your trip, make sure to spend the time looking for the best deals. Occasionally, if you call hotels directly they will even beat the rates advertised on Expedia and Priceline.