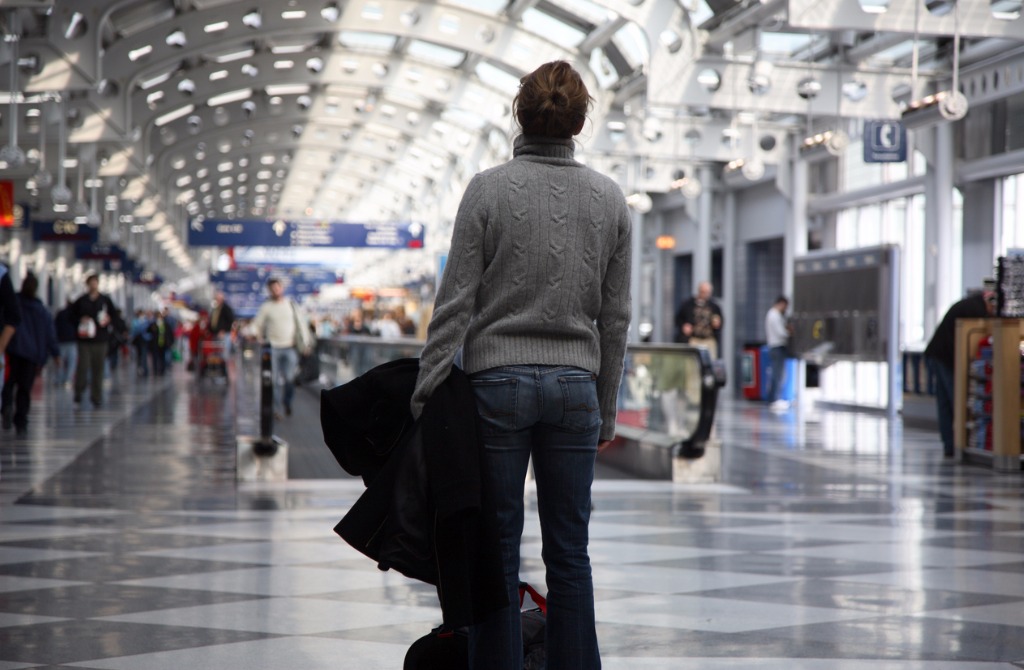 Flying over the holidays is never an exciting prospect. December means snow in any many parts of the country, and snow means grounded flights, long delays and missed connections. Plus, it seems like just about everyone is flying somewhere making airports stressful places to be. But while the holiday-flying process is not exciting for anyone, some people have it worse than others. Below we analyze flight data to find the worst airports in the country to fly out of.

In order to find the worst airports to fly out of over the holidays, SmartAsset analyzed data for 74 different airports. We compared them across flight cancellation rates, delay rates and average length of delay.

This is the second annual study of the worst airports to fly out of during the holidays. Check out the 2016 version here. 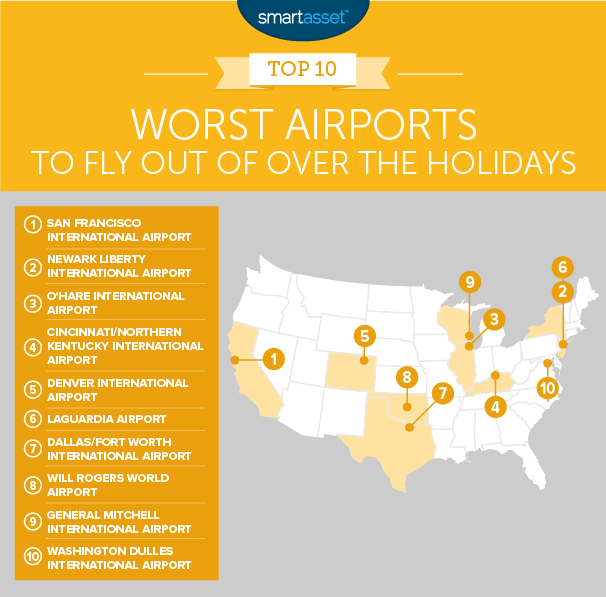 Anyone flying out of San Francisco International Airport (SFO) better cross their fingers. Our data shows it’s the worst airport to fly out of over the holidays. If you are flying out of SFO, watch out for the delays. According to our analysis, the average delayed SFO flight departs about 41 minutes late. That is the fourth-longest delay in our study. Definitely a bad sign for people who arrive at their gate on time, but perhaps a blessing for those who are stuck in security.

Additionally, over the past four Decembers, almost 3% of flights out of SFO were canceled, the fourth-highest figure in the study.

Newark has a bad reputation among New Yorkers and maybe for good reason. Over the past four Decembers, 51% of flights were delayed and 2.75% were canceled. For both of those figures Newark Liberty International Airport ranks in the top 10. The average delayed flight took off about 38 minutes after its scheduled departure time.

If you are flying out of Chicago this December, you have two options in front of you. You can fly out of O’Hare, the third-worst airport in our study or Chicago Midway International Airport, 20th-worst.

O’Hare comes in third thanks to high flight cancellation rates. According to our data, over the past four Decembers, 3.4% of all domestic flights out of O’Hare international were canceled. That’s the second-highest percentage in our study.

CVG takes fourth on the list of the worst airports for holiday travel. If you are most worried about whether or not your flight will be delayed, Cincinnati/Northern Kentucky International Airport is actually not a bad place to fly out of. According to our data only 31% of flights out of this airport are delayed. It beats 69 other airports in the study for that stat.

However if you’re unlucky enough to be on one of those delayed flights out of CVG, our research shows the airport has the second-longest average delay time in our study. Over the past four Decembers, the average flight delay time was 45 mins. Additionally, 3.3% of flights were canceled, the third-highest rate in our study.

Denver is a newcomer to our top 10. Our analysis reveals that flights out of Denver International Airport have a bad habit of departing late in December. Over the last four Decembers, more than 56% of flights out of this airport did not leave on time.

One piece of good news is that while flights are often delayed, they are not delayed for the longest time. According to our data, the average delayed Denver flight is delayed by 35 minutes, only the 23rd-worst in the study.

According to our data, LaGuardia is the sixth-worst airport to fly out of. The airport has the 10th-highest cancellation rate in the study. Over the past four Decembers, 2.5% of flights were canceled.

It also has long delay times. According to our data, delayed flights can expect to leave almost 40 minutes after the scheduled departure time. For that metric LaGuardia ranks seventh.

Unfortunately for Dallas/Fort Worth residents, flights out of DFW are canceled fairly frequently. Over the past four Decembers, DFW had a 4.9% flight cancellation rate. That’s the highest of the 78 airports we analyzed.

In other metrics this airport fared better. For example, the average delayed flight is only late by 33.9 minutes, the second-shortest in the top 10.

Will Rogers World Airport in Oklahoma City retains its spot on this list. If you are flying out of this airport in December, you risk having your flight canceled. Over the past four Decembers, about 2.8% of flights out of OKC were canceled.

The one piece of good news for air travelers out of OKC is that the majority of flights left on time. Just over 41% of December flights out of OKC departed late. That’s the second-lowest rate in the top 10.

Milwaukee winters make for tough flying weather. Perhaps that is one explanation for why General Mitchell International Airport has such a tough time getting flights out. According to our data, 2.4% of flights were canceled over the past four Decembers. That means about one out of every 40 flights got canceled.

This airport also scores poorly in average length of delay. The average delayed flight did not depart until almost 37 minutes after its scheduled departure. That sort of delay can disrupt a tight connection.

Flying out of Dulles this December? Beware, your flight may be delayed. Over the past four Decembers, 46% of flights out of this airport did not leave on time. The average delay time was 34 minutes. Furthermore, about one in 50 flights were canceled. 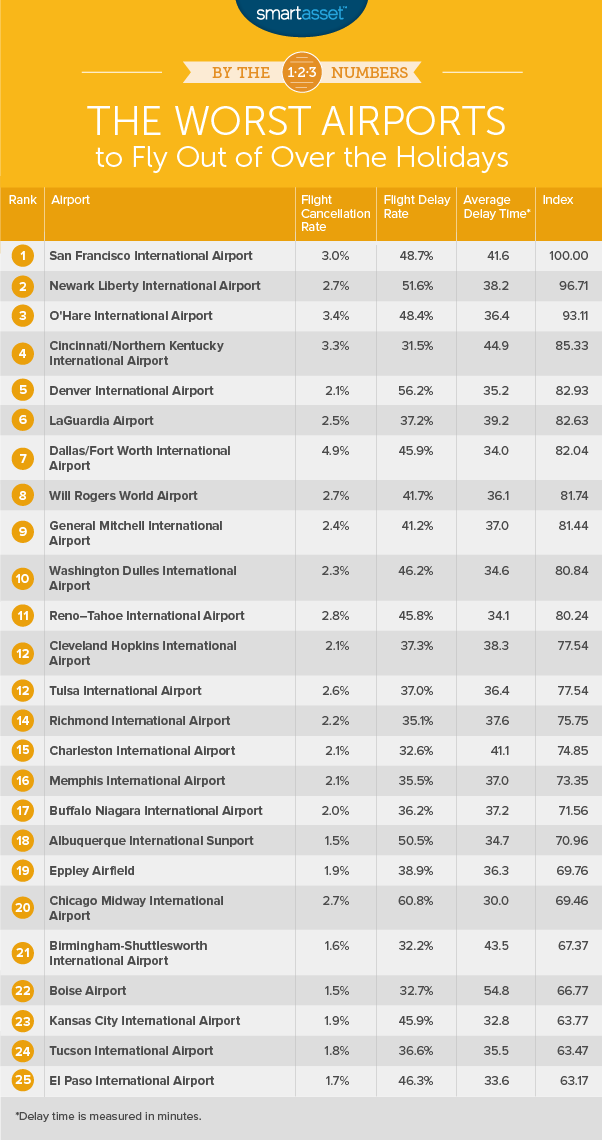 In order to find the worst airports to fly out of over the holidays, SmartAsset looked at December flight data for 78 airports. Specifically we looked at airports which had at least 4,000 flights during December 2013 – 2016. We compared the airports across the following three factors.

Did you know that some travel rewards credit cards include reimbursement if your flight is delayed or canceled? Some credit cards will pay you back if you are forced to check into a hotel due to bad weather delaying your flight.

Often during overbooked flights, airlines will offer vouchers to passengers who give up their seats. If you are not pressed for time, it may be worth it to take the airline up on the offer. However, you should also know your rights if you can’t get on a plane because it’s overbooked. In that case, the airline has to pay you a certain amount based on how much longer your travel time becomes. For example, if you get to your destination two hours later than you would have before being removed from a flight, the airline owes your $1,350. Make sure you don’t settle for less.