Holiday Connections: The Best and Worst Airports to Fly Through 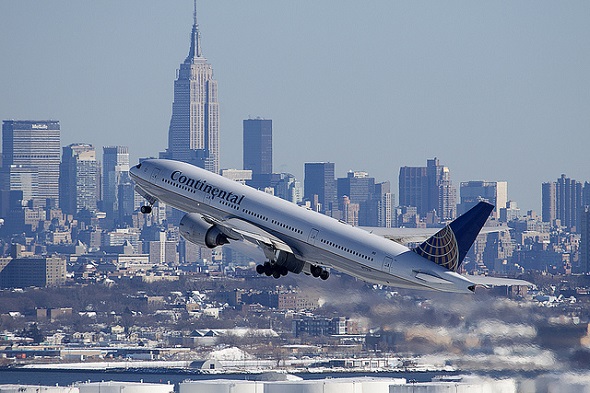 This time of year, traveling by airplane can be a bit of a gamble. The biggest threat is bad weather: last year alone we saw an ice storm wreak havoc in Dallas just days before Thanksgiving, and blizzards repeatedly ravage the east coast and Midwest during the month of December. Even when the weather is good, however, there’s still plenty of opportunities for big headaches. Flight delays and cancellations can strike at any time, and if you only have a few days or a week to see your family or sit by the beach, disruptions to your itinerary can ruin your vacation.

Is it better to buy or rent? SmartAsset has the answer.

There’s no surefire recipe for avoiding holiday travel headaches. Flights can be delayed or cancelled for any number of reasons, many of them totally random. That being said, some airports perform far worse on these measures than others—and not only because they receive more snow. We wanted to find the airports that were most likely to spoil your holiday travel plans.

We looked at three years of flight data for the months of November and December, comprising nearly three million individual flights (all domestic). This time period covered a range of weather patterns: 2013 had numerous November and December storms across the country; 2012 featured several storms in early November and another rash of storms around Christmas; and 2011 had a relatively quiet winter storm season. Though weather was a significant determinant in our results, it was not the only determinant. In fact, in several cases, airports in the very same city had vastly different results.1

Our investigation centered on two data points: cancellation rates and delay rates. First, we calculated the percentage of arrivals at each airport that were significantly delayed over the past three holiday seasons. Since most travelers leave a minimum of 30 to 45 minutes between connecting flights, we considered any delay 45 minutes or greater as a potential missed connection. We then found the percentage of flights at each airport that had been cancelled over the past three years, and combined that with the rate of significant delays. The resulting cumulative percentage is the likelihood that a traveler connecting at that airport would have gotten stranded, either because she arrived too late to catch her next flight, or because her next flight was cancelled. 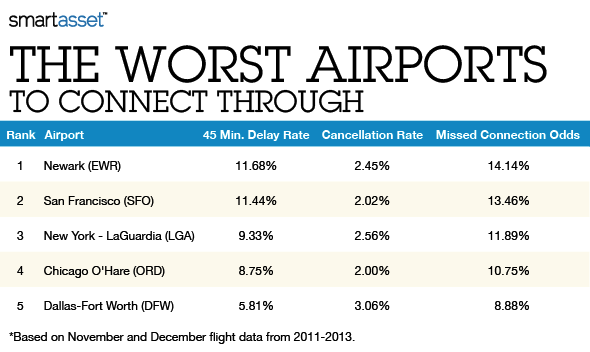 Newark is far and away the worst airport to connect through. It saw an average of more than 39,000 domestic flights coming into and out of its terminals over the past three holiday seasons (the greatest number of all three major airports in the New York City metro area). During that time EWR had the highest overall rate of significant delays of any airport in the country: 11.68% of all incoming flights were delayed at least 45 minutes.

This probably has less to do with weather and more to do with air traffic. Newark has just three runways, one fewer than nearby JFK, and fewer than other airports that handle a similar number of flights, like Minneapolis-Saint Paul (4 runways) and Detroit (6 runways). That means airplanes have a longer wait in the air for a runway to clear. The one upside? Passengers get to enjoy a beautiful view of New York City and the Statue of Liberty as their plane circles the skies waiting to land.

Despite the region’s mild winter weather, San Francisco International ranks as the second worst airport for connecting flights. With four runways serving an average of 52,715 November and December domestic flights over the past three years, it had almost exactly the same number of flights per runway as Newark, just over 13,170. SFO also featured the fourth highest cancellation rate with 2.02% of its departing flights cancelled over the past three years. If you are flying into or out of the Bay Area, Oakland International, which had a missed connection rate of 6.54%, less than half that of its cross-bay neighbor, may be a better choice.

On a per runway basis, LaGuardia could actually be the busiest airport in the country. It has just two runways serving an average of 32,900 holiday season flights, a worse ratio than either Newark or San Francisco. For that reason, planes at LaGuardia spend more time waiting to take off than at any other airport in the country. On average, over the past three holiday seasons, passengers have waited over 24 minutes for their flight to take off after leaving their gate. For travelers in the New York area, JFK is definitely the safest bet for departures and connections.

The larger of the two airports serving the Chicago area, the odds of missing a connection when flying through O’Hare are over 4% higher than when flying through Chicago Midway (MDW). What’s most surprising is the disparity between the cancellation rates at these two airports. In spite of the fact that they experience identical weather, O’Hare’s cancellation rapture of 2% is over three times higher than Midway, where roughly 0.64% of flights have been cancelled over the past three holiday seasons. The message is clear: if possible, choose MDW over ORD.

Planning for retirement? Find out how much you need to save.

In 2013, the Dallas area was hit by a particularly bad storm. Several inches of ice coated the entire area, and airlines operating out of Dallas-Fort Worth International, unused to and unprepared for this sort of weather, were forced to cancel thousands of flights. For that reason, Dallas’s 2013 cancellation rate was the worst of any airport for any year in our study: over 7% of flights out of Dallas were cancelled in November and December of last year. Excluding last year’s data, Dallas has a missed connection rate closer to average. 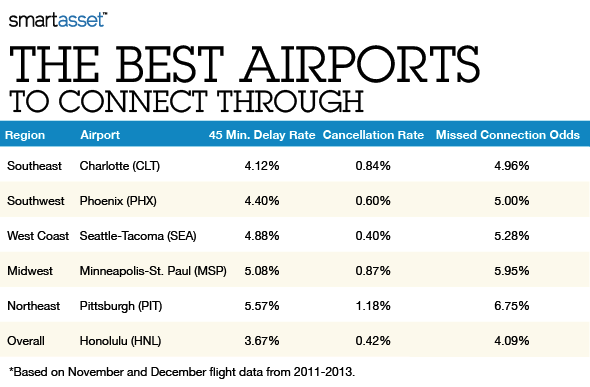 Since the top airports for connections are by and large in the mild climates of the west and south, we wanted to highlight the best cities in each geographical region, which may be more helpful when making a travel decision. The full list of all 52 airports we examined is included at the end of the article.

With a cancellation rate of less than 1%, Charlotte was the number two best airport of any in our study for making your connection, and the top airport in the southeast. Though it has seen traffic increase in recent years, it has managed that growth well by adding runways, first in 2010, with another planned in the near future. It has also been expanding its concourses. If you are making a connection in the southeast, Charlotte is a good choice.

The southwest is a logical choice for a connection if you’re traveling to South America, and Phoenix Sky Harbor is the most reliable connecting airport. Not only did PHX have the third lowest delay rate for arriving airplanes, it also had the 10th lowest cancellation rate. In all, travelers making a connection of 45 minutes or fewer over the past three holiday seasons would have missed their second flight about 5% of the time, far below the average for major U.S. airports.

Sea-Tac has always been a top choice for travelers going to Asia or Hawaii, and for good reason. Over the past three years, SEA had the lowest cancellation rate of any major airport in the U.S., with less than half a percent of flights leaving Seattle being cancelled. Not only are flights arriving to Seattle significantly delayed less than 5% of the time, passengers landing in Sea-Tac often get to enjoy a close-up, breathtaking view of Mount Rainier.

Despite its long, snowy winters, which often begin well before Thanksgiving, Minneapolis-St. Paul is a very good choice for connecting flights according to our research. Over the past three holiday seasons, flights leaving from MSP were cancelled less than 1% of the time.  In part, this is probably due to the fact that bad weather is expected in Minnesota, so when it arrives, they are prepared.

The high volumes of air-traffic and unpredictable weather common to airports in the Northeast made them generally poorer choices for connecting flights. Pittsburgh, in contrast, has performed relatively well during the holiday season. Its missed connection odds of 6.75% were below the average for major U.S. airports, and better than any other airport in the northeast.

The overall best airport to fly through is also the one most likely to only work as your final destination. Less than half a percent of flights leaving from Honolulu were cancelled during the past three years, and less than four percent of arrivals were significantly delayed. Of course, Honolulu might not be the worst place to be stuck for a few extra days.

Update: Travelling for the holidays, or anytime, can be expensive and it’s important to plan ahead by prioritizing travel in your budget. Enough people reached out to us saying they wanted help with financial planning, that we built a tool to match you with a financial advisor who can meet your needs. First you answer a series of questions about your situation and your goals. Then the program narrows down thousands of advisors to three fiduciaries who meet your needs. You can then read their profiles to learn more about them, interview them on the phone or in person and choose who to work with in the future. This allows you to find a good fit while doing much of the hard work for you.

1. All flight data came from the Bureau of Transportation Statistics TranStats portal, available at transtats.bts.gov.