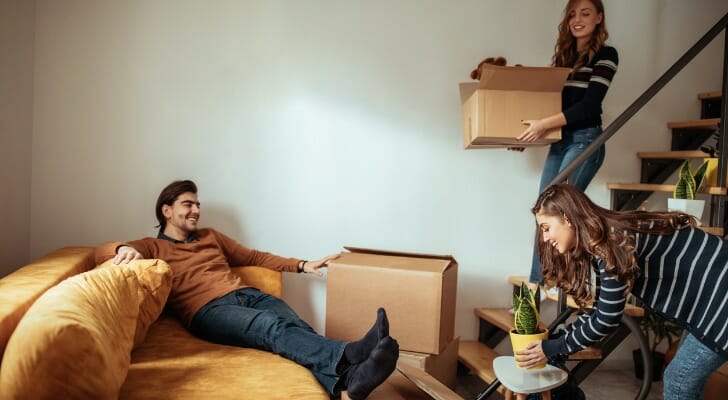 Finding a roommate to split your rent is a surefire way to save money, which is welcome consolation for the dirty dishes that pile up in your sink. Of course, the real estate market landscape is currently in flux due to the spread of COVID-19, but as people reshuffle their lives and housing arrangements, they may not score the coronavirus deals they expect. Though rental listings website Zumper notes the rental market has seen slowdowns in Google search volumes for apartments and apartment listings due to the increasing number of Americans sheltering in place, prices are still rising. The national average for one-bedroom rent increased 0.2% in March 2020 from the previous month, while the national average for two-bedroom rent increased 0.6% over that period; prices are up year-over-year as well. Since the current state of the world makes economizing of the essence, SmartAsset uncovered where having a roommate can save you the most.

To find what living with a roommate saves you across the country, we examined data on the average rent for a one-bedroom apartment and compared it to the average rent for a two-bedroom apartment for 50 of the largest U.S. cities. We then measured the cost difference between renting a one-bedroom alone and renting a two-bedroom with a roommate. For details on our data sources and how we put all the information together to create our final rankings, check out the Data and Methodology section below.

In our current times, the coronavirus pandemic is negatively affecting many Americans’ livelihoods and finances. In response to the resulting economic crisis, the government recently passed a stimulus package called the Coronavirus Aid, Relief and Economic Security (CARES) Act that included several provisions directly and indirectly protecting homeowners and renters.

This is SmartAsset’s sixth annual study on how much a roommate saves you. Read the 2019 version here. 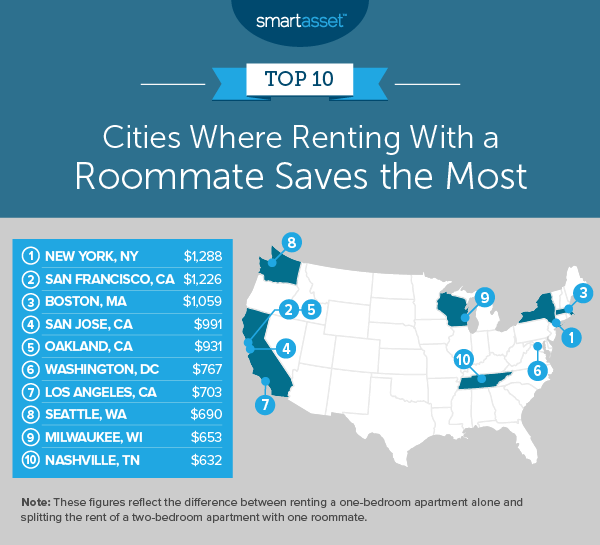 Given the high cost of living, New York, New York is where you can save the most by renting with a roommate instead of renting on your own. According to data from Zumper, the average one-bedroom apartment in New York City is $2,973 per month. The average two-bedroom apartment is $3,369, which means splitting a two-bedroom with a roommate would result in a monthly payment of $1,684, ultimately saving you $1,288 per month, or close to $15,500 a year.

With the highest average rents in the study for both a one-bedroom apartment as well as a two-bedroom one, San Francisco, California is definitely a place where cutting down on housing expenses can go a long way. Although the average two-bedroom rent ($4,655) in the city is about $1,000 more per month than the average one-bedroom rent ($3,554), splitting a two-bedroom with a roommate can benefit renters’ finances substantially. Average savings amount to $1,226, or $14,715 in a year.

The average San Jose, California renter pays $2,475 per month for an apartment, according to data from Zumper. That means a renter in San Jose is shelling out upwards of $29,000 per year. Renting a two-bedroom apartment with a roommate would be a better decision for the person’s finances, since that way each roommate would only have to pay $1,448 per month, saving $991 per month and $11,889 per year.

The third and final Bay Area city in our top five, Oakland, California has an average one-bedroom rent of $2,394 a month and an average of $2,928 total ($1,464 each) for two-bedroom rent. Savings for renters in Oakland who choose to have a roommate amount to $931 each month per person, or upwards of $11,000 in a year.

If the average renter in Seattle, Washington chose to live in a one-bedroom apartment in Seattle, the person would have to allocate $1,858 of his or her monthly budget toward rent, making the yearly rental expense $22,300. However, if the person were able to find a roommate and split the rental costs of a two-bedroom apartment, each person would only have to pay $1,169 per month – resulting in savings of $690 per month, which ultimately amounts to $8,277 saved in one year.

Nashville, Tennessee rounds out our top 10. The average one-bedroom apartment in Nashville costs $1,327 per month. By splitting the cost of the average two-bedroom apartment with a roommate, a Nashville resident would instead only need $695 to cover rental expenses. This means $632 saved per month, or $7,579 in a year.

In order to find the cities where a roommate saves you the most, SmartAsset examined data on 50 of the largest U.S. cities. We compared them across the following two metrics: