How People Plan to Use Their Stimulus Checks – 2020 Study 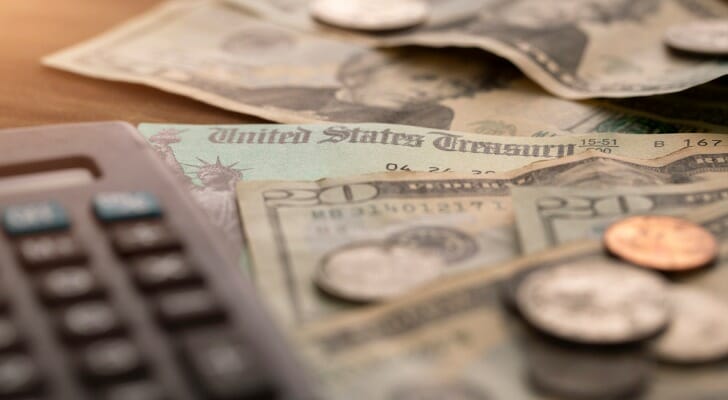 Passed on March 27, 2020, the Coronavirus Aid, Relief and Economic Security (CARES) Act provided Americans with one-time economic impact payments, commonly referred to as stimulus checks. Under the bill, individuals and families are eligible for either a full or reduced benefit based on their adjusted gross income (AGI). There have been many questions surrounding the stimulus checks, including who is eligible, when payments will be received, how Americans will spend the money and if there may be a second round.

In this study, we dove into some of those questions by analyzing the results of a survey conducted on SmartAsset’s website between April 10, 2020 and April 20, 2020. In the survey we asked three questions:

We discuss trends in the responses generally and also examine them in a granular capacity according to gender and age. For more information on our survey, its results and how we put the findings together, check out the Data and Methodology section below.

Uncertainty Under the CARES Act

A high percentage of Americans were – and perhaps may still be – uncertain of whether they were or are eligible to receive a stimulus check under the CARES Act. According to an online survey posted on SmartAsset’s website with more than 2,000 respondents, almost 18% of individuals did not know if they would receive a stimulus check.

Uncertainty about receiving a check varied more by age than gender. Approximately 17% of men and 18% of women did not know if they would receive a benefit. Meanwhile, more than 20% of respondents between the ages of 55 and 64 were uncertain as to whether they would receive a check, but less than 15% of individuals between the ages of 35 and 44 shared that uncertainty. The table below shows how, according to age, Americans responded to our first survey question: Do you expect to receive a check from the COVID-19 stimulus bill? 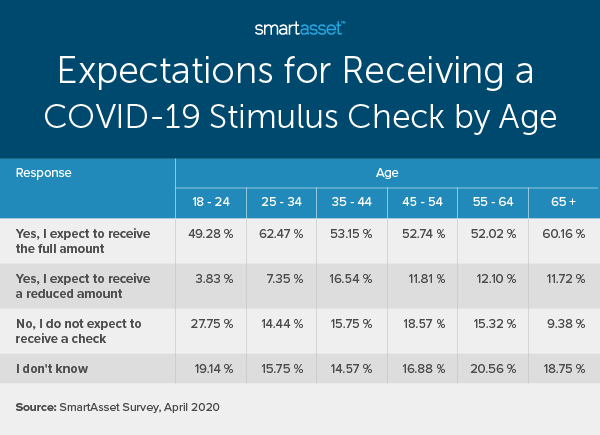 How Americans Are Spending Their Stimulus Checks

Of the roughly two-thirds of SmartAsset survey respondents who expected to receive either the full or reduced benefit, more than half said that they would use the money on needs such as rent and food. Saving and paying off loans or debt were the next most popular categories to which individuals planned to allocate their stimulus money. The chart below shows the full breakdown of responses. 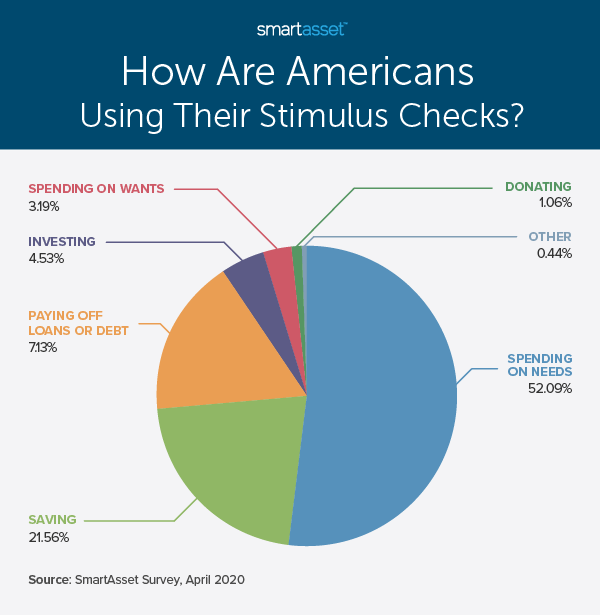 Similar percentages of men and women (16.24% and 16.80%, respectively) responded that they planned to use the money to pay off loans or debt. However, responses from men and women diverged between the choices of spending the money on needs vs. investing it. A higher percentage of women said they would primarily use the money on needs (e.g. rent, food, etc.) while more men said they would invest the money. Women were also more likely than men to say they planned to save the money (22.13% of women vs. 20.10% of men). 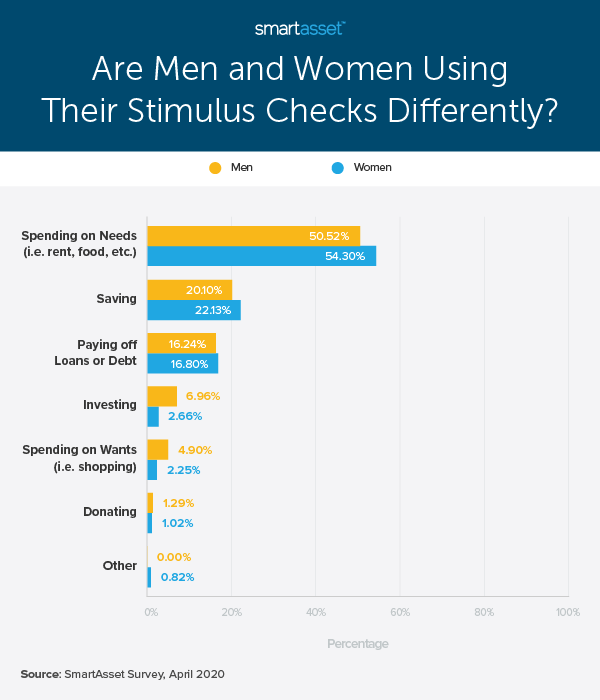 These differences between male and female respondents are perhaps unsurprising given the breakdown of responses by gender to the third question in our survey: Do you have three to six months’ worth of expenses saved in an emergency savings fund? More men than women responded yes. Specifically, of individuals expecting to receive a stimulus check, less than 30% of women had three to six months’ worth of expenses saved, but close to 40% of men had that amount at the ready in an emergency fund. Men, who responded as having more in savings than their female counterparts, would likely be able to invest their money more easily.

Though more than 19% of respondents ages 35 to 44 were also focused on saving, respondents aged 25 to 34 were most likely to say they would primarily save their stimulus money. More than a quarter of them – 27.31% – answered that saving would be their priority. Even younger adults between the ages of 18 and 24 followed closely behind – 24.51% of them planned to keep their money in a savings account. That age group (18 to 24) were also the most likely (at 7.84%) to say that they would invest the money, either in the stock market or through a retirement account. The full breakdown of responses by age is shown below. 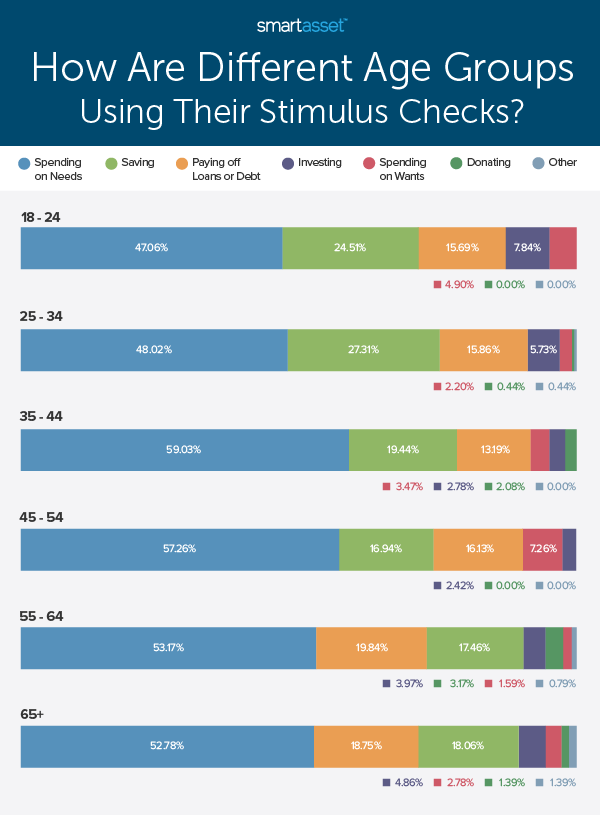 As previously noted, only 32.47% of survey respondents who expected to receive a stimulus check had three to sixth months’ worth of expenses saved in an emergency fund. With more than 22 million Americans filing for unemployment between mid-March and mid-April, many reporters, economists and politicians have questioned whether the one-time stimulus checks are enough to sustain Americans through the coronavirus pandemic. As a result, there has been some discussion about a second round of checks or some other program to help Americans during these trying times. Though no second bill has been passed as of yet, the second round of Paycheck Protection Program (PPP) loan funding may put even more pressure on lawmakers to get more money to individuals along with businesses.

All figures in this report come from an online survey posted on SmartAsset’s site between April 10, 2020 and April 20, 2020. We asked the following three questions:

The total sample size was 2,034 adults, including 1,357 who anticipated receiving a stimulus check. Of the 1,357 respondents who anticipated receiving a check, 1,127 responded to the second survey question and 1,047 responded to the third survey question. We used the largest survey size possible when discussing metrics in each section. Data on gender and age of respondents comes from Google Analytics.

Tips for Making Smart Financial Decisions During a Recession