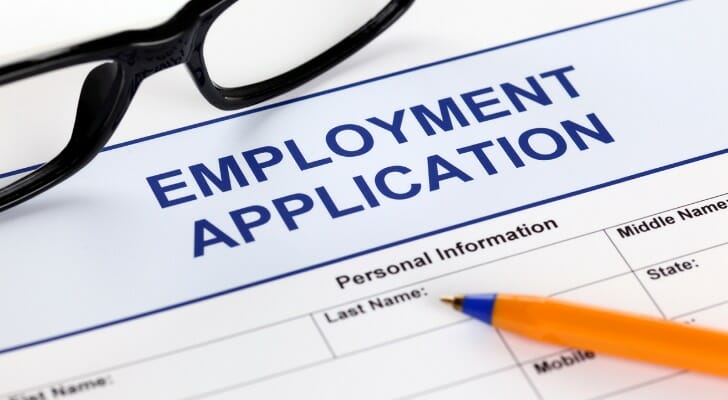 Since mid-March as the coronavirus pandemic has intensified, there have been four straight record weeks for jobless claims filed in the U.S. – a fact that increases economic uncertainty and makes it difficult for Americans to save adequately. For the week ending March 21, 2020, 3.31 million Americans filed for unemployment, followed by 6.87 million and 6.62 million the two subsequent weeks. Last Thursday, the Department of Labor reported that another 5.25 million individuals filed for unemployment for the week ending April 11, 2020, bringing the four-week moving average to 5.51 million claims per week. In total, more than 22 million Americans filed for unemployment between mid-March and mid-April, though state and local labor forces have been affected to varying degrees.

In this study, we uncovered the states with the most initial unemployment claims for the period between March 15, 2020 and April 11, 2020. We compared the total number of initial jobless claims for those four weeks to the state’s labor force, calculating the percentage of the workforce that filed for unemployment. For more information on our data and how we put it together, check out our Data and Methodology section below. 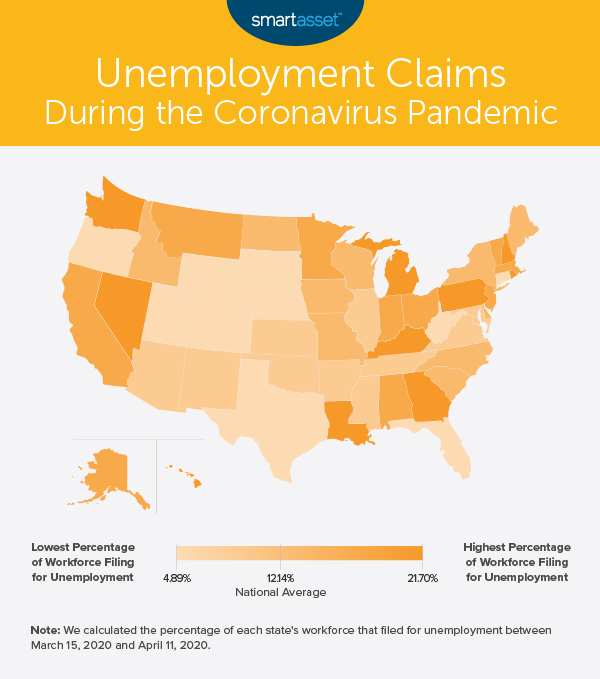 Of all 50 states, Hawaii had the highest percentage of its labor force file for unemployment between the weeks ending March 15, 2020 and April 11, 2020. Though the weekly claims number fell by about 35% from the week ending April 4, 2020 to the week ending April 11, 2020, the cumulative number of Hawaiian residents filing over the four weeks was still extremely high compared to its labor force. About 145,200 individuals, or almost 22% of the labor force, filed for unemployment benefits between mid-March and mid-April.

With the fourth-highest gross number of jobless claims over the past month – following only California, Pennsylvania and New York – Michigan ranks as the state with the second-most claims relative to its workforce. More than 200,000 Michigan residents filed for unemployment every week for the past three weeks. In total, for the period spanning from March 15, 2020 through April 11, 2020, more than 1.04 million individuals, or 21.01% of the labor force, filed with Michigan’s state office.

In gross terms, Rhode Island had the 14th-lowest number of residents filing for unemployment benefits between March 15, 2020 and April 11, 2020 of all 50 states. However, this number alone does not reflect the extent to which residents in the state were affected. With a labor force of fewer than 558,500 people, more than one in five residents lost their job over the past month and submitted a claim to receive unemployment benefits.

Data for this study comes from the Department of Labor and the Bureau of Labor Statistics (BLS). The national figures quoted in the introduction are seasonally adjusted while state figures are not. To find the states with the most jobless claims, we first calculated the total initial unemployment claims filed for the week ending March 21, 2020 through the week ending April 11, 2020.

It should be noted that the number of initial claims for the week ending April 11, 2020 are advance claims, which are claims reported by the state that pays the unemployment insurance rather than the state in which the claimant lives. There can be adjustments to advance claims for those who live and work in a different state.

Tips for Making It Through a Recession