What Six Months’ Worth of Expenses Looks Like in the 15 Largest U.S. Metro Areas – 2020 Edition 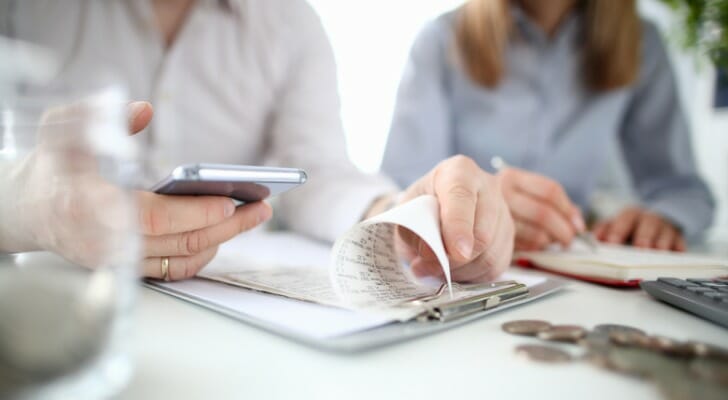 Amid health and economic upheaval from the COVID-19 pandemic, the need for an emergency fund has become increasingly pronounced. Though conventional wisdom advises having three to six months’ worth of expenses saved up, the uncertain timeline of the coronavirus crisis highlights the importance of having a full six months’ worth socked away. But what does that six-month budget even look like for individuals and families? widely by place. The numbers vary widely by place.

In this study, SmartAsset investigated what six months’ worth of expenses looks like in the 15 largest metro areas. We considered spending across the following categories: housing, food, childcare, medical expenses, transportation and expenses for other basic necessities. We found the average amount needed to last six months for the following four household scenarios: single adult with no children, single adult with one child, two adults with no children and two adults with two children. For details on our data and sources, check out the Data and Methodology section below. 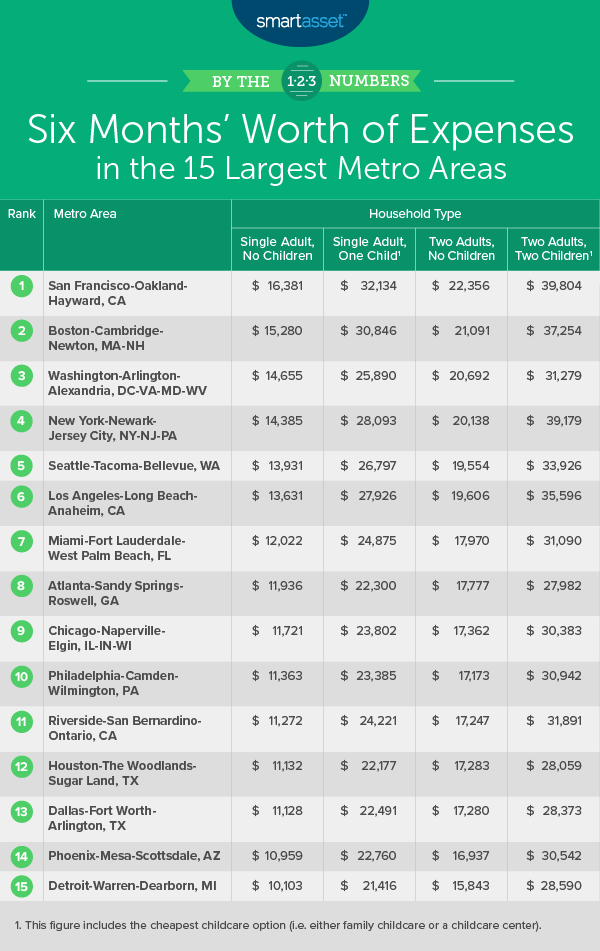 Single Adult With No Children

Across the 15 largest U.S. metro areas, six months’ worth of expenses for a single adult with no children ranges from $10,103 in the Detroit metro area to $16,381 in the San Francisco metro area.

Single Adult With One Child

Across the 15 largest U.S. metro areas, six months’ worth of housing costs average $8,794 for a single adult with one child. In six of those areas, housing costs exceed the average and reach upwards of $15,000 in places like San Francisco. In difficult economic times, a lack of mortgage or rent relief could make it difficult for households like this one to stay afloat if they don’t have enough saved.

After housing costs, childcare is the second-largest expense category for a single adult with one child in seven of the places in our study: the Los Angeles, Riverside, San Francisco and Seattle areas on the West Coast and the Boston, New York and Philadelphia areas in the Northeast. For this type of household across our study, average childcare costs – which account for the cheapest childcare option (i.e. family childcare or a childcare center) – come to about $3,900 across all 15 areas. Furthermore, six months of food costs an average of almost $2,500, and six months of transportation costs about $4,000 on average.

Two Adults With No Children

For a household with two working adults and no children, six months’ worth of expenses is highest in the San Francisco metro area – at $22,356 – and lowest in the Detroit metro area – at $15,843. The average amount across all 15 of the largest U.S. metro areas is $18,554, with nine metro areas falling below this average.

In households with two children, childcare (which, in our study, includes the cheapest family childcare or childcare center option) takes a fairly large share of expenses, averaging $6,366 across all the places we considered. Furthermore, childcare costs exceed housing costs in three metro areas: Phoenix, Detroit and New York.

As far as being able to afford food for six months, the average amount that this type of household would need across all the metro areas in our study is $4,878, which is almost three times the amount that a single adult with no children would need ($1,655) to do the same. Medical costs for this household over six months would range from $2,829 in the Seattle metro area to $4,097 in the Washington, D.C. metro area.

To calculate six months’ worth of expenses in the 15 largest U.S. metro areas, we found the annual cost of living in each metro area – including housing costs, food, childcare, medical expenses, transportation and other basic necessities (including clothing, personal care items, etc.) – and divided it in half. Figures for childcare costs include the cheapest family childcare of childcare center option. We looked at four household scenarios:

Data comes from the MIT Living Wage Calculator and was pulled in March 2020.