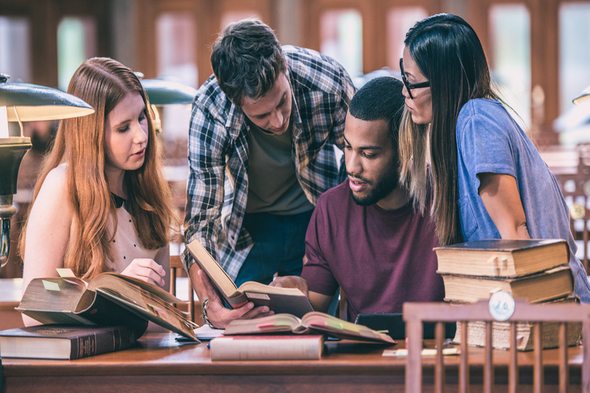 Many studies seem to suggest that millennials are in a financial pickle. For starters they earn less than their parents did when they were young adults. Plus, the average millennial has over $30,000 in student debt. For millennials who are struggling to boost their net worth and make the leap to homeownership, the last thing they likely want to face is a large tax bill. But unfortunately, high tax rates are a reality for many millennials across the country.

SmartAsset wanted to find the cities where millennials have the highest tax bills. So we looked at five-year estimates of median household incomes from the Census Bureau’s 2015 American Community Survey. Then we used our income tax calculator to estimate the federal, state and local tax burden for millennials in the 100 largest U.S. cities. We included FICA taxes in our analysis but excluded sales taxes and fuel taxes. 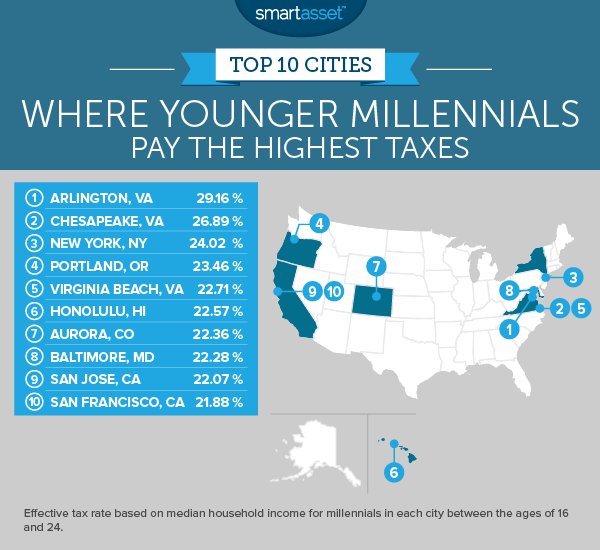 Arlington, Virginia recently ranked as one of the best cities for millennials, in part due to its low poverty rate among 20- and 30-somethings. But when it comes to paying income taxes, Arlington is one of the worst places to live, especially for young adults between the ages of 16 and 24. Overall (with federal taxes included), we found that a young millennial earning median income in Arlington would pay an effective tax rate of 29.2%.

Census Bureau data reveals that the median household income for young millennials in Chesapeake is around $64,695. As a result, they have some of the highest tax bills among their counterparts nationwide. Our analysis shows that a young Chesapeake millennial earning median income will pay about $14,170 in federal taxes and around $3,227 in state and local taxes.

New York City is another city that’s notorious for its high tax rates. Our study reveals that a young millennial earning median income in the Big Apple (the average income across all five boroughs, based on population) would pay an overall effective tax rate of 24%. That adds up to about $9,138 in federal, state and local taxes.

The median household income for a millennial between the ages of 16 and 24 is about $34,002, according to the Census Bureau. And while Oregon residents don’t have to worry about paying sales tax, many single filers face a steep marginal income tax rate of 9%. Based on our calculations, we found that a young millennial earning the median income in Portland can expect to pay about $5,645 in federal taxes and around $2,332 in state and local taxes.

Virginia Beach could be the perfect place to live if you like being in close proximity to the ocean. But if your income falls on the higher end of the spectrum, prepare to end up with a hefty tax bill. The federal effective tax rate for young millennials who earn the median income in Virginia Beach is 10.41%. Combined with state and local tax rates, that rate climbs to 22.7%, resulting in an estimated tax bill of $10,173 overall.

Property taxes in Hawaii are quite low. And while there isn’t a state sales tax, there is a general excise tax that business owners usually hand off to their customers. When it comes to income taxes, the top marginal rate for single workers who earn over $200,000 in Hawaii is 11%. That’s the second-highest rate in the country. For young millennials in Honolulu who earn around $36,388 (the median household income), the marginal tax rate is a bit lower: 7.9%. Overall, we found that the effective tax rate for young adults in the city (with federal taxes included) is 22.6%.

Aurora ranks seventh on our list of the places where younger millennials pay the highest taxes. Five-year estimates from the Census Bureau’s 2015 American Community Survey report that the median household income for 16- to 24-year old residents in the city is around $41,826. This means that a single filer earning median income can expect to pay about $7,417 in federal taxes and $1,937 in state and local taxes.

In Maryland, tax rates at the state level vary based on income. For example, for single filers who earn between $3,000 and $100,000, the marginal tax rate in the Old Line State is 4.75%. But at the local level, residents pay a flat tax. Those who live in the city of Baltimore have one of the highest marginal rates in the state of Maryland. Combining federal, state and local taxes leaves young Baltimore millennials who earn the median income with a 22.3% effective tax rate and an expected tax bill of $6,768.

On average, a young millennial in San Jose pays more income taxes than his or her peers in San Francisco and Los Angeles. That’s because the median household income in San Jose for young adults between the ages of 16 and 24 ($49,595) is higher than it is in other major cities across the state of California. A typical young adult in San Jose who earns the median income pays $1,707 in state and local taxes and $9,240 in federal taxes.

The median household income for young millennials in San Francisco is $49,078. The marginal tax rate for single tax filers in California who earn between $40,773 and $51,530 is 8%. Combined with federal taxes, this results in a total estimated tax bill of $10,737. 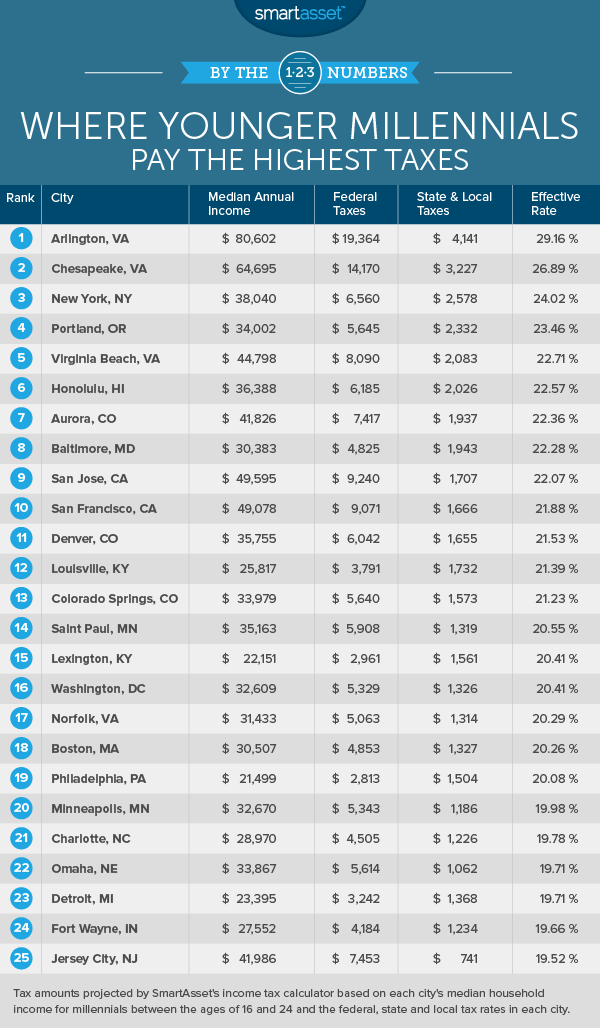 In terms of the cities where older millennials have the biggest tax burdens, we also had a three-way tie for 10th place. In Irvine, Santa Ana and Anaheim, California, older millennials who earn around $81,917 (the median household income for adults between the ages of 25 and 44) can expect to pay about $19,793 in federal taxes and $4,607 in state and local taxes.

The nation’s capital has a high cost of living. Tax rates are high, too, particularly for the top earners in the city. Those who earn between $60,000 and $350,000 face a local marginal tax rate of 8.5%. Based on our estimates, an older millennial in D.C. who earns the median income will spend roughly 31% of his or her income on taxes.

Income tax rates in the state of California vary widely based on income. The poorest residents pay a marginal tax rate of 1% and the wealthiest residents face a marginal rate of 12.3%. In Oakland, the median household income for adults between the ages of 25 and 44 is nearly $90,500. Adults who earn the median income pay an overall effective tax rate of 30.9% (with federal taxes included).

Fremont is located roughly an hour away from San Francisco, by car. The average older millennial earns around $90,499 per year and has a combined effective tax rate of 30.9%. That adds up to about $28,000 in federal, state and local taxes. 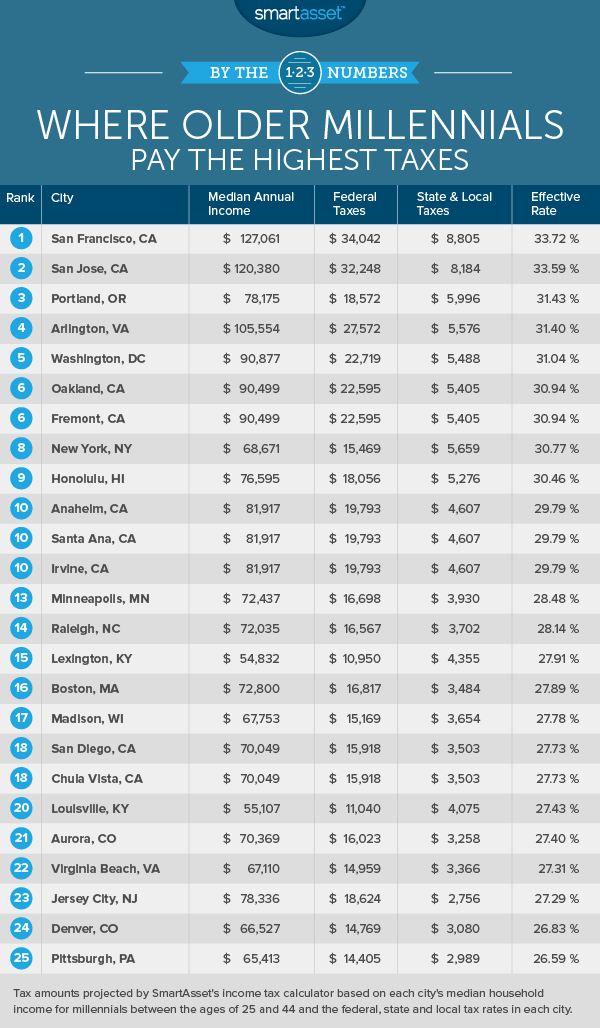 We made several assumptions throughout our study. For example, we assumed that a millennial would take the standard deduction and file taxes as a single filer claiming one exemption (meaning that he is not married and has no children). We also assumed that a typical millennial wouldn’t make any pre-tax contributions to a 401(k) or another retirement account.