The States with the Best Schools 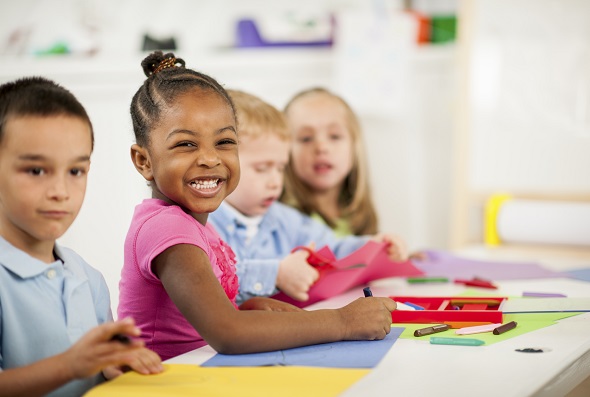 The United States is a global leader in many regards, but when it comes to education it seems there is room to improve. According to the OECD, U.S. schools rank 28th in the world based on student reading and writing performance at age 15.  That places us in the same league as European countries like Italy and Norway. On the other hand, we still lag behind Canada and several Asian countries, including Japan and South Korea.

This is SmartAsset’s second annual study of the states with the best schools. Read the 2015 version here.

What is true for the United States as a whole, however, is not necessarily true in every part of the country. Since public school districts are funded and administered at the state and local level, there are large disparities between states when it comes to school performance. (According to the U.S. Census Bureau, formula assistance funding is the largest source of revenue for public elementary and secondary schools, followed closely by property taxes.)

To determine which states have the best schools, SmartAsset looked at seven metrics of school quality and performance in all 50 states. Along with the overall graduation rate in each state, we looked at measures such as the percentage of students taking a college entrance exam, the percentage of students taking an advanced placement test and the student-teacher ratio. (Read more about our methodology below.)

Find out now: What is the best way to save for college? 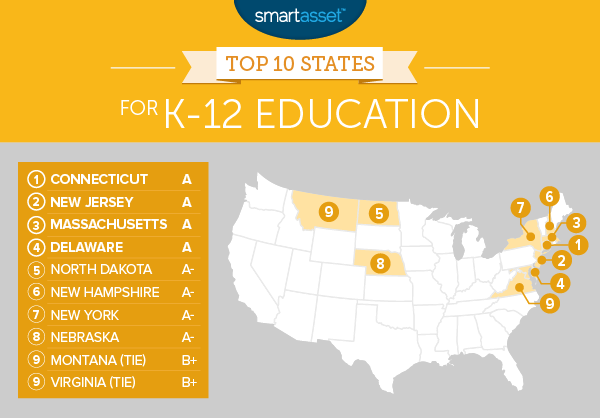 For the second year in a row, Connecticut ranks first in the U.S. for its K-12 education system. SmartAsset’s analysis found that 75% of Connecticut high school graduates go on to attend college within 12 months of graduation, the third-highest college attendance rate in the U.S.

Many of those who do attend college will have a leg up upon arriving. The state has the seventh-highest rate of participation in the advanced placement program, with 42% of 11th and 12th grader taking an AP class in 2015. Of those, more than 70% scored at least a 3 on their exam, the second-best percentage in the U.S. (A 3 is generally the minimum score required to be eligible for college credit from an AP class.)

Moving to Connecticut? Find out what your taxes will be.

As of fall 2013 there were 1.3 million students in New Jersey’s k-12 public schools, making it the 11th largest school system in the U.S. At the same time, it had the ninth-largest k-12 instructional workforce, with about 123,000 instructional staff members at public schools. That means there are less than 12 students for every teacher in New Jersey, giving in the country’s second-best ratio (behind Vermont).

Likewise, its high school graduation rate is among the best in the country. 89% of New Jersey high school students graduating within four years.

The Bay State is known for having some of the best colleges and universities in the world, but according to our analysis, it also does a good job of getting high school students prepared for those (and other) schools. Over 73% of Massachusetts high school graduates go on to college within 12 months of graduating. That’s the fourth-highest rate in the nation.

Despite having property taxes that are lower than the national average, Delaware ranks fourth in the nation for its k-12 education. How? One key factor is its college admissions testing program. In 2011, Delaware became one of the first states in the U.S. to provide free college admissions testing during a school day to every public school student.

According to the College Board, 9,823 of Delaware’s 2015 high school graduates took the SAT at some point during their high school careers. That means the SAT testing rate was 100%, higher than any other state in the nation. (Several other states have ACT testing rates of 100%.)

The SAT was once the default for college entrance tests (the acronym stands for “Standard Admissions Test”) but today a greater number of students take the ACT (which used to stand for American College Testing). It has grown in prominence because of a number of states which have begun funding statewide ACT testing.

In 2009, North Dakota became the sixth state to offer the test for free to all of its students. Today, 100% of high school graduates in North Dakota take the ACT test. That means one less hurdle to clear on your own when applying for college.

Find out why Fargo, North Dakota, ranks as a top city for raising children.

According to the Western Interstate Commission for Higher Education, New Hampshire has the nation’s sixth-highest high school graduation rate. More than 88% of public school students graduate from high school on time in the state.

Teachers can play a crucial role in making sure students do not slip through the cracks, which may help to explain New Hampshire’s high graduation rate. There are fewer than 12 students to every teacher in New Hampshire public schools, the third-best ratio in the U.S.

For the second year in a row, New York ranks among the top 10 states for k-12 education. More than 150,000 students took an AP class in New York in 2015, which equals about 41% of all juniors and seniors in the state. That is the eighth-highest AP testing percentage in the U.S.

The state likewise has one of the best student-teacher ratios in the country. According to the National Education Association, there are about 13 students for every teacher in New York.

All Montana high school juniors are required to take the ACT test. It serves double duty as an assessment test for the state and a college entrance exam for students. The state average score of 20.4 on the ACT ranks second among the 13 states that require the test. (State average scores are higher in states which do not require.)

Along with having great k-12 schools, Virginia is one of the nation’s best states for higher education. It rates especially high for the percentage of eligible students who enroll in an AP class, at 44%. According to the College Board, students who complete an AP course are more likely to graduate from college on time.

1. There were three metrics we considered in last year’s analysis that we excluded this year. Those were the percentage of students taking a secondary college entrance exam (whichever of the SAT or ACT is taken by fewer students in each state), and the average scores on the ACT and SAT. Considering a secondary exam penalized states like North Dakota, which requires all students to take the ACT. As a result, very few students take the SAT, as it is unnecessary. Likewise, considering average scores favors states where only top students take entrance exams.