The States with the Best Schools in 2015 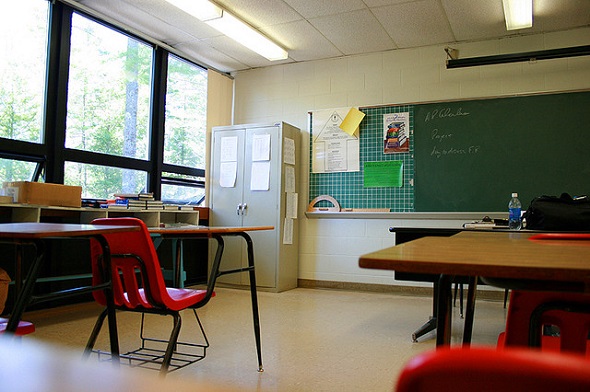 As of 2011, total spending for all public elementary and secondary education in the United States surpassed $630 billion per year, more than $12,300 per student. The vast majority of that funding, roughly 88%, came from state and local governments.  State governments have an especially important role: they maintain standards for curriculum, make sure that school districts with faltering local tax bases are adequately funded and assess the efficacy of public schools by administering statewide achievement tests.

So which states are doing the best job of maintaining strong public school systems? To answer that question, SmartAsset looked at ten across-the-board metrics of education, placing a special emphasis on how well states are preparing students for college. For each state, we considered the percentages of students taking the SAT, ACT and AP tests, and the average scores for those tests. We also looked at the state-level funding-per-student, the student-teacher ratio, the high school dropout rate and the percentage of high school graduates attending college after graduation (read more about our methodology below).

Good schools in the northeast. Led by Connecticut, each of the top four states in our study is located in the northeast, and seven of the top ten are on the east coast. Most notable among these states was the high rate of college-attendance. In New York, Massachusetts, New Jersey and Connecticut, over 70% of high school graduates attend college within 12 months of graduating.

The west can do better. The west is home to all four of the lowest-grading states in our study, and six of the eight states that received an overall F are west of the continental divide. Washington, Arizona, Oregon and Nevada all have below average college-attendance rates, below average per-student spending levels and higher-than-average student-teacher ratios. 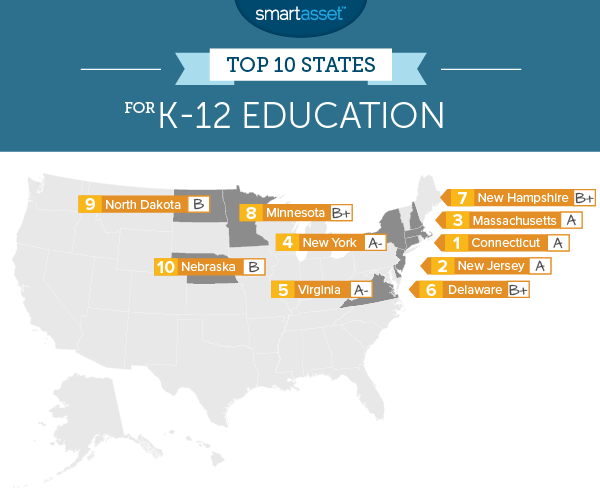 That is why Connecticut’s efforts to not just educate its k-12 students, but to also give them the opportunity to enroll in college is so important. Connecticut had the 3rd highest college-enrollment rate of any state in the country, with 76% of high school graduates enrolling in college within 12 months of graduation. Add to that the ninth lowest high school dropout rate of any state in the country, and it’s easy to see why Connecticut receives an “A” for its k-12 public education system.

The Garden State has long been recognized for its high quality schools. Business Insider’s 2014 ranking of the top public high schools in the country features three New Jersey schools, including the school ranked number one overall, High Technology High School in Lincroft, New Jersey. Our research found that New Jersey couples the second lowest dropout rate in the country with the eighth highest college attendance rate. It also rated in the top ten for its level of per-student funding, and its student-teacher ratio.

Since the passage of a major statewide school reform bill in 1993, Massachusetts schools have improved markedly, and today they are among the best in the country. The state’s Advanced Placement Exam Fee Subsidy Program has helped pushed the rate of students taking AP tests into the top ten of all states, even while average scores on those tests remain high—4th highest in the country. Bay State students also had the highest average ACT Score of any state in the country, though just 23% of them took that test in 2014 (as compared with the 84% that took the SAT).

The state of New York invests $20,376 annually for every student in its public education system, second only to Vermont. That investment is paying off. It has the sixth-highest college attendance rate of any state in the country, with 71% of high school graduates attending college within 12 months of graduation.

Virginia’s most famous native son, Thomas Jefferson, was a strong proponent of public education. In 1779, while governor, he wrote “A Bill for the More General Diffusion of Knowledge,” which described a free public education system that was nearly unheard of at the time. While such a public education system would not come to Virginia until after the civil war, the groundwork was laid. Today, Virginia boasts the fifth lowest dropout rate of any public school system in the nation, and the third highest rate of students taking an AP exam. It is also one of the nation’s top states for higher education.

The highest-ranked state outside of the Northeast and mid-Atlantic region, Minnesota boasts among the lowest dropout rates and highest college-attendance rates in the country. Some 71% of Minnesotan high school graduates attend a college or university within 12 months of graduating, the seventh highest rate in the nation.

Nebraska’s student-teacher ratio of just 9.8 to 1 is second highest in the nation. That means students in Nebraska’s public schools can spend more valuable one-on-one time with teachers, which in turn can produce better academic outcomes.

For each of those ten metrics, we ranked all fifty states and applied a score from 0-100 based on that ranking. A school ranked first would receive a 100, while a state ranked last would receive a zero. After applying the weights listed above, we calculated an average score for each state. Grades were assigned on a curve, based on the percentile of each school’s raw score.

Read the 2016 version of SmartAsset’s study of the states with the best schools here.

2. Scores for the SAT, ACT and AP tests have a strong inverse correlation with the percentage of students taking that test. The fewer students that take the test, the higher the score, likely because students who are interested in attending top-flight schools likely make up a larger portion of the testing population. For that reason, we weighted the scores on these tests lightly.