The Top States for Higher Education in 2015 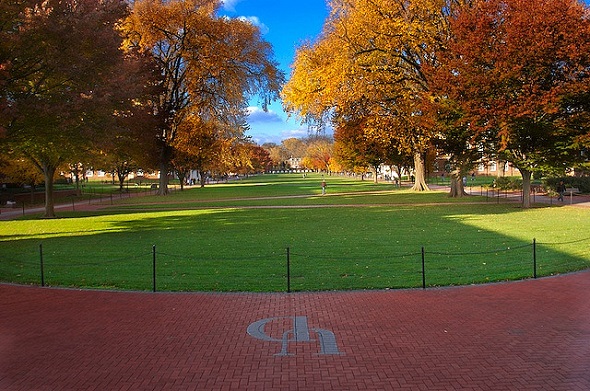 Public universities and colleges serve many important roles in each of America’s 50 states. They are crucial pieces of an academic system that aims to educate young people and prepare them for the workforce. However, the quality, cost, and accessibility of schools ranges greatly from one state to the next. So which states’ higher education systems are doing the best job?

To answer that question, SmartAsset looked at data on enrollment, tuition, graduation rates and post-graduation employment for public colleges and universities in all 50 states. We wanted to find school systems that were accessible to the state’s high school graduates, and which provided students with a high quality education. Considering over 2,000 public colleges and universities in our analysis, we assigned each state a grade from A to F based on how it compares to other states across five different metrics (read more on our methodology below).

Learn more about the cost of college. 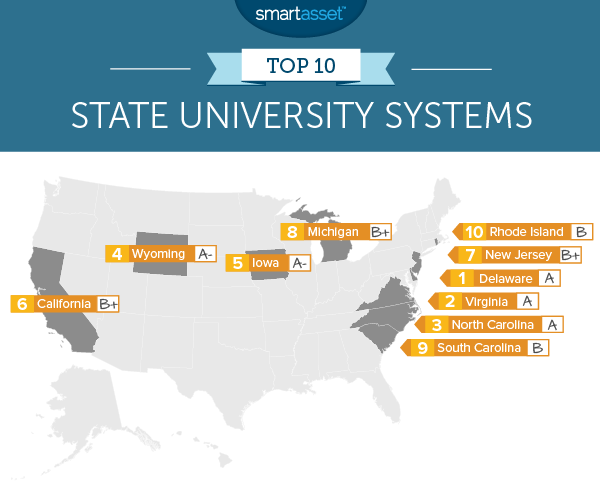 See the most affordable cities in Delaware here.

Led by the University of Virginia, which was the second ranked public university in 2015’s annual U.S. News rankings, Virginia’s public higher education system rated in the top 20 for five of the six metrics we considered. Virginia’s weighted graduation rate of 68% was third highest of any state, as was the 20-year return on investment of over $420,000, which makes paying off student loans that much easier. Along with UVA, other top schools in the state include the Virginia Polytechnic Institute (Virginia Tech) and James Madison University, which boasts the 12th ranked undergraduate business school in the country, according to BusinessWeek.

Public higher education has long been a priority in the Tar Heel state—longer, in fact, than anywhere else. The University of North Carolina at Chapel Hill was founded in 1789, making in the oldest public university in the country. It is also one of the best, with a graduation rate of 90% and a student-to-faculty ratio of just 13:1.

While North Carolina’s universities and colleges offer among the best public educations in the country, they also make that education very accessible. We found that over half of North Carolina high school graduates attend a state school within 12 months of graduating, the ninth highest rate in the country.

The University of Wyoming is Wyoming’s only public university, but, given that Wyoming is the least populous state in the country, one university serves the state well. The UW has an undergraduate enrollment of about 10,000, and a student-to-faculty ratio of just 14—which means Wyoming’s overall student-to-faculty ratio is also 14, second best in the country.

Most discussions of the best state university systems include the state of California, and with good reason. The state’s three-pronged approach to higher education, which includes the UC system, the California State Schools and California’s Community College System, is as comprehensive as it is effective. Some 49% of California high school graduates enroll in a state college or university directly out of high school, well-above the national average of 43%. Equally impressive is that, despite its size, California maintains the eleventh highest overall graduation rate, weighting for enrollment, of any state in the country.

New Jersey’s higher education system rated in the top ten for three of the five metrics we considered. Its enrollment-weighted return-on-investment of $395,030 was fifth highest overall, as was its graduation rate of 65%, and its student-to-faculty ratio of 15.4 to 1 was seventh best in the country. In fact, the only metrics by which New Jersey fell below average are both measures of accessibility. Just 33% of New Jersey high school graduates attend an in-state university of college, which may be due in part to the relatively high cost of attendance at state schools—New Jersey’s enrollment-weighted net price is 11th highest in the country.

Both the University of Michigan and Michigan State University are among the top 35 in the 2015 U.S. News rankings of public universities, with the U of M coming in at number four. While having that kind of quality at the top is important, those two schools only account for about 27% of the total undergraduate enrollment of Michigan’s public four-year colleges and universities. Schools like Western Michigan, Wayne State and Grand Valley State, are equally important parts of Michigan’s higher education system, and they all contribute to the state’s above average graduation rate and lower than average student-to-faculty ratio.

The highest rated southern state in our study, South Carolina rated in the top ten for its high enrollment-weighted graduation rate and the high percentage of high school graduates who attend an in-state school. The University of South Carolina in Columbia is easily the largest school in the state, with an undergraduate enrollment of about 24,000. While the Gamecocks can be proud of their 73% graduation rate, their Palmetto Bowl rivals in Clemson have them bested, with a grad rate of 83%.

There are two public four-year institutions in Rhode Island: the University of Rhode Island (URI) and Rhode Island College. URI is the larger of the two, and the state’s flagship institution. Established on May 19, 1892, it has an undergraduate enrollment of about 13,500, and offers bachelor’s degrees in 79 different areas of study.  Both URI and Rhode Island College rate well for their student-to-faculty ratios, with an enrollment-weighted average between the two of just 15.9 students for every faculty member, ninth highest of any state in the country. For students, that means more direct access to faculty, and in turn a better educational experience.

To assess the quality and accessibility of state school systems, we looked at data from the National Center for Education Statistics’ Integrated Postsecondary Education Data System, the Western Interstate Commission for Higher Education and PayScale College ROI Report. Specifically, we looked at the following five metrics:

For each of those five metrics, we ranked all fifty states and applied a score from 0-100 based on that ranking. A state ranked first would receive a 100, while a state ranked last would receive a zero. After applying the weights listed above, we calculated an average score for each state. Grades were assigned on a curve, based on the percentile of each school’s raw score.

Read the 2016 version of SmartAsset’s study of the best states for higher education.