The Best States for Higher Education in 2016 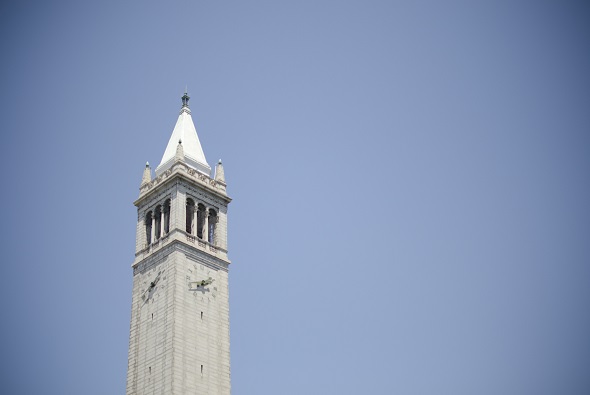 Higher education is always a big topic in election years. Candidates of all political stripes readily agree that our colleges and universities are a key driver of prosperity but that there are serious flaws with our current system. The most-discussed issue in higher education today is the rising cost of attendance at schools across the country, which has forced students to take on increasing sums of student loans. But there are other problems too, such as the 59% graduation rate for undergraduate students.

This is the second annual version of SmartAsset’s study. Read the 2017 version here.

While those issues certainly have a national flavor, however, their depth varies significantly between states. Take, for instance, the problem of cost. While the average net price at all public four-year colleges and universities was about $13,500 per year (in 2014-2015), in three states it was less than $10,000 and in nine states it was more than $15,000.

This type of variance from one state to the next makes sense. After all, higher education is by and large a state issue (despite the attention it receives from politicians running for national office). Public colleges and universities are administered by state governments and a primary goal of most higher education systems is to educate state residents. So which states are doing the best job?

To find the best states for higher education, SmartAsset collected data on four-year public universities and colleges in every U.S. state. Based on that data, we calculated averages of the following four metrics:

These averages were weighted based on the total undergraduate enrollment of each school. So, for example, a school with double the enrollment will have twice the effect on the overall average.

In addition to those four metrics, we also calculated the in-state attendance rate at each state. This is the number of first-time, in-state students in each state in 2014 as a percentage of the total number of high school graduates in 2014. For this metric, we also included two-year public colleges, as some states use these schools as stepping stones to four-year colleges.

This number reflects each state’s effectiveness at educating its own residents, a primary goal of public higher education systems. It does not necessarily reflect the percentage of high schoolers who go directly to college, however, as some first-time, in-state residents may have taken time off after school.

We ranked each state according to the above five factors (the data for all 50 states is shown in the table at the bottom of this article). We then averaged those rankings, giving full weight to the graduation rate in each state and half weight to all other metrics. Lastly, we assigned grades based on those averages. 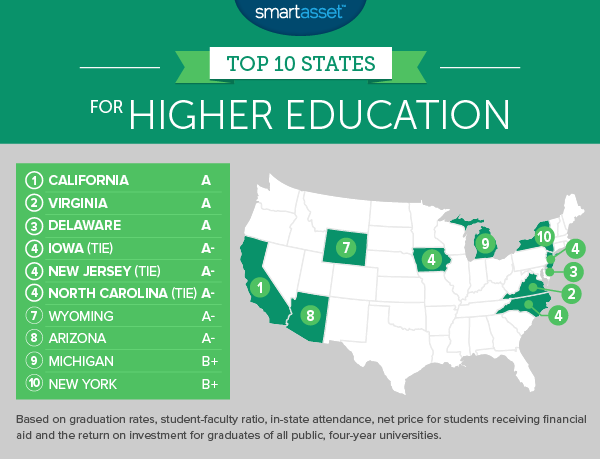 There are about 600,000 undergraduate students enrolled in California’s public, four-year colleges and universities. Given the sheer scale of higher education in California, it’s all that much more impressive that the Golden State continues to provide some of the highest quality post-secondary education anywhere in not just the U.S. but in the world.

California schools rank first in the U.S. for the return on investment its students receive. Over 20 year years, the average college grad in California can expect to earn $425,562 more than she would have without a degree.

California also rated among the top ten for its graduation rate (63% across all of its many schools) and its average net price. Paying $10,220 per year after all non-loan financial aid, the average California student will not need to take out as big of a student loan as those in the public university systems of other states.

The state of Virginia’s higher education system does two very important things very well. The first is that it graduates most of its students. The average graduation rate across Virginia’s public colleges and universities is 69.3%, second highest in the United States.

By itself, handing out a lot of degrees does not necessarily mean that a state university system is doing a good job. Those degrees must represent something of value – a good education. Here too, Virginia excels. The average 20-year ROI for graduates of the state’s higher education system is $393,483, fourth highest in the U.S.

Nearly three-quarters of students at Delaware’s two public universities – the University of Delaware and Delaware State University – graduate within six years. The state’s 73% graduation rate ranks first in the nation. Those students also do quite well after graduation, earning the nation’s third-highest return on investment at $406,096 over 20 years.

One area where Delaware’s higher education system could stand to improve? Size. The two public universities and one public two-year college took on 4,631 in-state students in 2014. That is equal to just 52% of the state’s 2014 high school graduates, the 16th lowest rate in the U.S. (The University of Delaware is currently undergoing a major expansion, but that is largely focused on research facilities, not students.)

For the second year in a row, Iowa rates among the top five states for higher education. Each of Iowa’s three public universities has a graduation rate of at least 64%, higher than the national average. The largest school in the state (by enrollment) is Iowa State University, where the graduation rate is 69%. Graduates of ISU get a 20-year return on investment of $447,700, according to Payscale.

Iowa’s universities also provide students with a particularly good environment for getting an education. Cedar Falls, Ames and Iowa City all rate among the top 25 college towns to live in.

Rutgers University is by far the largest public college or university in New Jersey. It is also one of the best public universities in the U.S. Its main campus in New Brunswick has a graduation rate of over 80%. What’s more, while many flagship universities across the country have been enrolling increasing numbers of out-of-state students, who pay a higher tuition, Rutgers continues to take the vast majority of its students from within the state of New Jersey – 83% in 2014.

North Carolina rated among the top ten states for both its graduation rate and its in-state attendance rate. In 2014, a little more than 91,000 students graduated from a North Carolina high school. That same year, a total 65,590 in-state, first-time students enrolled in North Carolina public university or college equal to about 71% of all high school graduates.

With a population of less than 600,000, Wyoming is the smallest U.S. state. The University of Wyoming is the only public university or college in the state. The school matches a below-average net price with an above-average return on investment for graduates. The average net price for University of Wyoming students is $11,856, while graduates get an average return on investment of $383,500 over 20 years.

While the state of Michigan’s flagship university (the University of Michigan) has been increasingly admitting and enrolling out-of-state students in recent years, other state schools continue to primarily focus on in-state students.

Aside from the U of M, no public university or college in Michigan enrolled less than 70% of its students from within the state in 2014. Many, such as Grand Valley State and Central Michigan, were over 90%. (At U of M, the rate was 55%.) That focus on in-state students means high school graduates in Michigan have more access to higher education.

The Empire State has one of the largest higher education systems in the U.S., with total enrollment of more than 335,000. Nonetheless, college students in New York receive a high quality education. The state has one of the best student-faculty ratios in the country, with just under sixteen students for every faculty member. That ranks 8th in the U.S.

1. Data on the graduation rate, the student faculty ratio, the average net price and the total enrollment comes from the IPEDS data center at the National Center for Education Statistics. The 20-year return on investment figures come from Payscale. Data on the number of high school graduates comes from the Western Interstate Commission for Higher Education.