Where Procrastinators Must Save the Most for Retirement 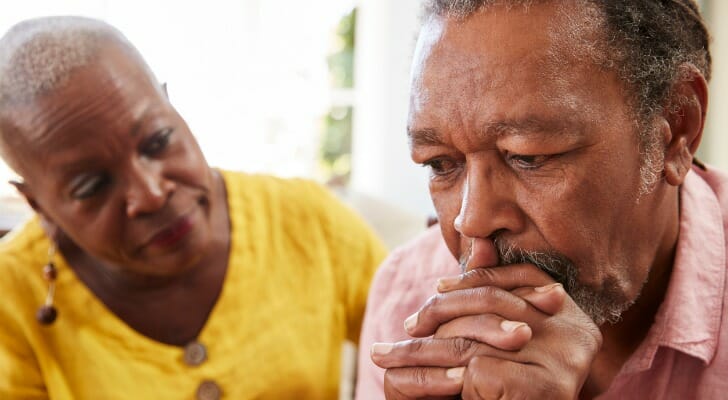 Raising a family has never been a walk in the park. But today’s parents may face a steeper uphill climb, financially speaking, than those in the past. The cost of raising a child has risen to $233,610. according to the United States Department of Agriculture. Meanwhile the need for, and price of, a college education has never been higher. It is no surprise, then, that conquering all of those financial feats may leave parents feeling like they missed their chance to save for retirement. But while saving for retirement is best done while young, it is never too late to start planning. With a little hard work, diligence and expert advice from a financial advisor, even someone starting with little savings at age 50 can save for retirement in a substantial fashion.

Below we simulated the retirement situation for the average household in 25 of the largest metro areas. We assumed they were able to save only $10,000 for retirement and were trying to retire by 65. We ranked the cities by estimated percentage income households needed to save in order to have a financially secure retirement until the age of 95. Check out our data and methodology below to see where we got our data and how we put it together to create our final rankings. 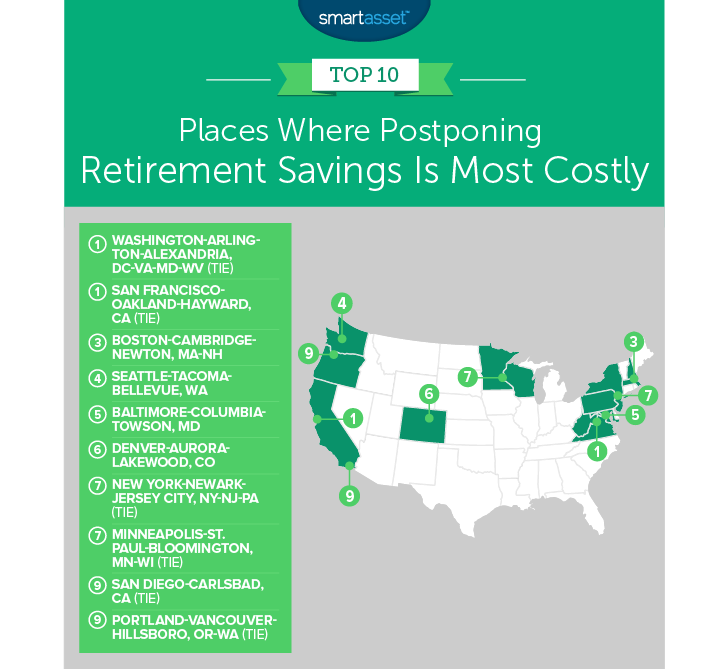 Families looking to retire in the metro area surrounding the nation’s capital will need to do a lot of saving. Assuming a household has only managed to squirrel away $10,000, we estimate the average household would need to save nearly a third of earnings from the ages of 50 to 65. The reason this area ranks so high is because of the high cost of living. To maintain the pre-retirement lifestyle our retirement calculator estimates, households here will need about $71,900 per year to cover retirement expenses, which is equal to $108,290 during retirement years after taking inflation into account.

Another wealthy metro area comes in tied for first. The cost of living in San Francisco is notoriously high, so it wouldn’t be too surprising if many of its residents had not made much progress toward saving for retirement by 50. According to our estimates, residents here would need to save about $2,602 per month or roughly 32% of their income. In retirement, our calculator estimates you will need about $109,000 per year in income, of which nearly $59,000 would come from Social Security benefits. In today’s dollars that is about $72,500.

Another high-cost-of-living metro area takes a top spot. Households here that did not get a head start on their retirement planning will need to save about 28% of their income according to our retirement calculator. That amounts to $1,888 per month and would leave them with a lump sum of $574,974 to draw on in retirement. Combine that with Social Security and we estimate the average household in Boston would have $91,350 worth of retirement income, after accounting for inflation.

Using our model, we estimate that a household in Seattle will need about $514,875 saved up for retirement to maintain its preretirement lifestyle. To hit that goal, we estimate the average Seattle household will need to save and invest about $1,685 per month. Assuming annual returns of 5% with a starting savings of $10,000, we estimate a Seattle household could hit $514,875 with 15 years of constant saving and investing. One benefit of retiring here is that Washington is a tax-friendly state for retirees and does not tax retirement income.

Coming in fifth is Baltimore-Columbia-Towson, Maryland. This metro area has a median household income of nearly $77,000. Cutting that figure by 75%, we estimate that to maintain its lifestyle into retirement, the median household in this metro area would need $57,591 in annual retirement income. To reach that figure, residents here would need to save a quarter of their income or $1,625 per month. After saving for 15 years they would have $497,300 saved up enough to retire on after that’s combined with Social Security.

The Denver-Aurora-Lakewood, Colorado metro area takes sixth. The Denver-Aurora-Lakewood, Colorado metro area has one of the hottest housing markets in the country. Anyone who bought a home in this area in the past decade has probably made a fairly profitable investment and may not have to worry too much about savings more broadly. However, residents who missed the homebuying bonanza have been squeezed by ever- rising rents and have no home investment to rely on. Residents who are in a similar situation, without much savings later in life, need to do quite a bit of catching up here. In total we estimate the average 50-year-old household needs to save and invest just under a quarter of its annual income every year for 15 years until retirement to maintain its current lifestyle in retirement.

The New York-Newark-Jersey City, NY-NJ-PA metro area is slightly more affordable than some other metro areas ranked above. There are more than 20 million residents living in the New York metro area and the median household takes home just under $72,000 per year. We estimate that to cover retirement expenses the average retired couple will need about $54,000 per year in income. In order to hit that number, we recommend the average New Yorker and residents living in the outlying metro area save and invest $1,370 per month, which is 23% of their income.

Minnesota and Wisconsin are probably not what people think of when they plan their retirement. According to our data these two states lost a combined 6,400 retirees from 2015 to 2016. However all of that loss comes from seniors leaving Minnesota. Wisconsin actually saw a net gain in seniors over that period. In any case if you are living in Minneapolis, or thinking about moving to Minneapolis to retire, but don’t have much saved, get ready to start saving. We estimate to retire in the Minneapolis metro area and continue living the local median lifestyle, you will need to save about $1,432 per month — or 23% of your income.

In order to retire comfortably in San Diego-Carlsbad, California we recommend retiring at 65 with savings equal to $408,522. If you start saving early, that number is probably not too difficult to reach. However, starting late, say around 50, and reaching a secure retirement will be challenging, although not impossible. To hit a savings of $408,522, you will need to save and invest just over $1,322 per month, or 22% of the local median income.

The final metro area in our top 10 is Portland. This metro area covers a densely populated area straddling the western portion of the Oregon-Washington border. The median household earns about $68,700. We estimate that to live a similar lifestyle in retirement the median household will need about $51,500 in retirement income. In order to have a steady annual retirement income of $51,500, our retirement calculator estimates the average 50-year-old household with only $10,000 saved up would need to save about $1,240 per month, or 22% of income, until retiring at age 65. 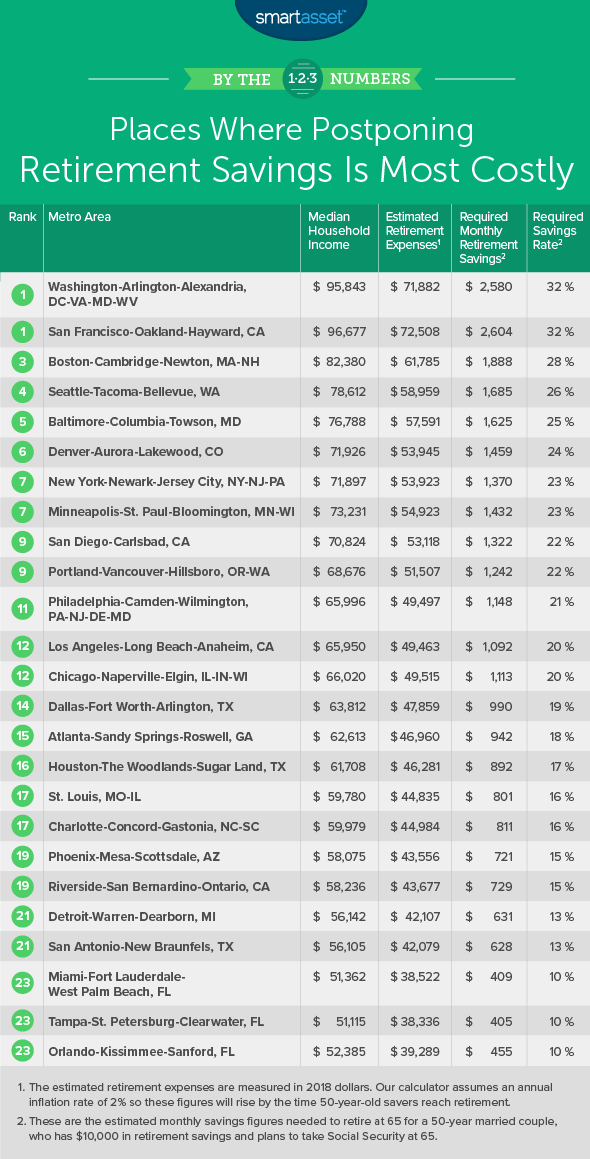 In order to find the places where postponing retirement savings is most costly, we looked at data on the 25 largest metro areas. Specifically we created a financial model to estimate how much of its annual income a 50-year old married couple would need to save in order to retire at 65. In order to do this, we made a few assumptions. We assumed the married couple would have savings of $10,000, would invest all future savings with returns of 5% and would retire at 65 and take Social Security at 65. Furthermore, we assumed retirement expenses would equal 75% of pre-retirement income. Our retirement calculator then estimated how much the average household in our model would need to save each year from 50 to 65 in order to be able to fund its retirement fully. We ranked the metro areas from highest to lowest based on this number.

Tips for Saving for a Secure Retirement