Where Upper-Middle-Class People Are Moving 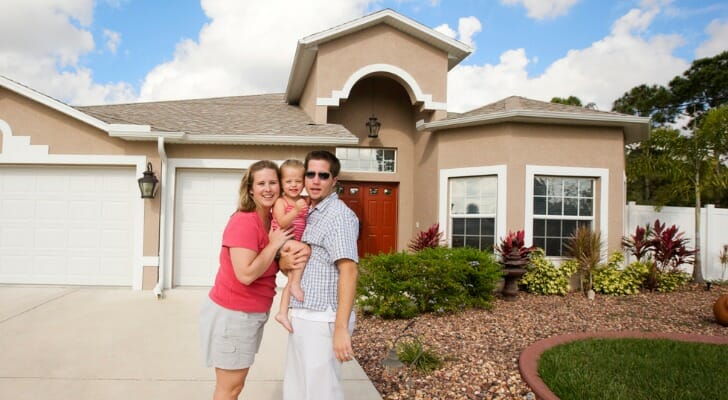 The middle class may be feeling the squeeze, but the upper-middle class certainly isn’t. The former cohort has shrunk from 61% of households in 1971 to just 52% now, according to the Pew Research Center. The upper-middle class, by contrast, has seen an uptick to 12% of households compared to just 10% almost 40 years ago. This growing, high-earning demographic, which SmartAsset defined as those with incomes between $100,000 and $200,000, is also on the move, migrating across state lines potentially for job opportunities, attractive housing markets or lower tax liabilities.

To find where upper-middle-class people are moving, SmartAsset analyzed inflows and outflows of people in this income range in every state as well as Washington, D.C. For details on our data sources and how we put all the information together to create our final rankings, check out the Data and Methodology section below.

This is SmartAsset’s second study on where upper-middle-class people are moving. Read the 2019 version here. 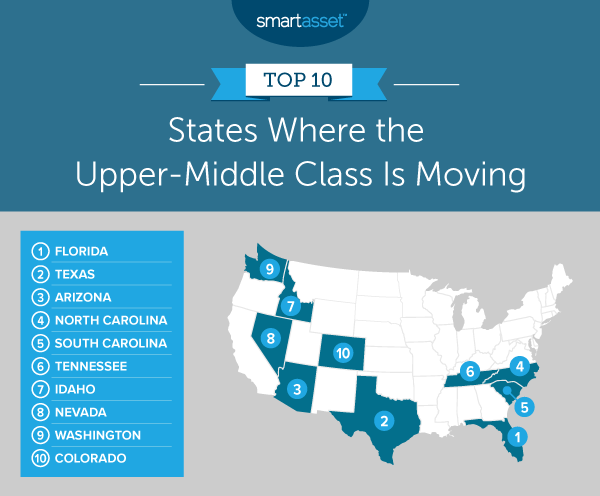 North Carolina saw a net gain of 6,002 upper-middle-class people over the time period we considered for this study. North Carolina has several big cities, access to many beaches and a flat income tax rate of 5.25%, all of which could be attractive to people with incomes from $100,000 to $200,000.

South Carolina has among the lowest property tax rates in the nation, so high-income earners can buy their dream house without worrying about being overwhelmed by taxes. The Palmetto State saw an increase of 4,927 upper-middle-class people from 2017 to 2018.

Tennessee is another state that does not tax salaries or wages (but there are taxes on interest and dividend income). The Volunteer State gained 3,215 upper-middle-class people from 2017 to 2018.

Though Idaho has fairly high income taxes, it has low property taxes and is actually one of the best states for homeowners. That may explain, in part, the appeal of the state, which saw a net migration of 2,708 upper-middle-class people between 2017 and 2018.

Nevada is another state offering no income tax, which is a strong incentive for people making higher incomes. The Silver State gained 2,644 upper-middle-class citizens from 2017 to 2018.

Washington State is another state with no income tax. This factor could be one contributor to the increase in upper-middle-class residents by 2,593 from 2017 to 2018. Those in Washington seeking a financial advisor firm to work with may wish to consult SmartAsset’s list here.

Colorado gained 2,580 upper-middle-class residents between 2017 and 2018. Those interested in moving there might wish to note that the Rocky Mountain State has a flat income tax of 4.63% and relatively low property taxes.

To find out where upper-middle-class people are moving, SmartAsset compared data from tax returns between 2017 and 2018 for every state and Washington, D.C. We found the inflows and outflows for people earning between $100,000 and $200,000 and subtracted the outflows from the inflows to calculate the net migration. Then, we ranked all 50 states, along with Washington, D.C., by this net figure. All data is from the IRS.

Tips for Managing Your Money in the Upper-Middle Class