Where Millennials Are Moving – 2020 Edition 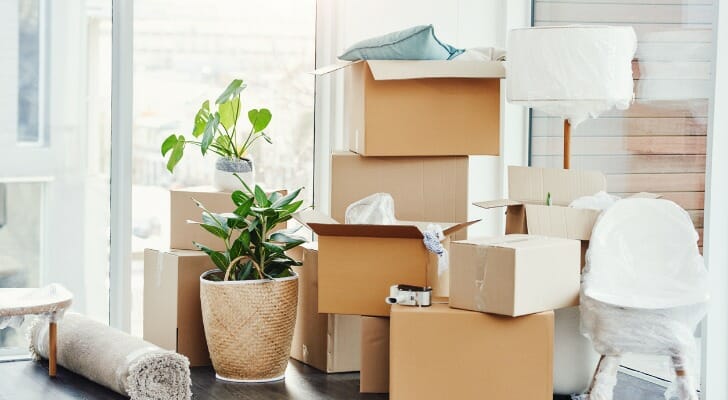 With the coronavirus pandemic potentially leading many millennials to reconsider where they live, SmartAsset decided to look at the states and cities where millennials have been moving prior to the crisis. Using the most recent Census Bureau data from 2018, we compared the number of people between the ages of 25 and 39 who moved into a state or city to the number of people who moved out. For more information on our data and how we put it together, check out our Data and Methodology section below.

This is SmartAsset’s fourth annual study on where millennials are moving. Read last year’s version here.

States Where Millennials Are Moving 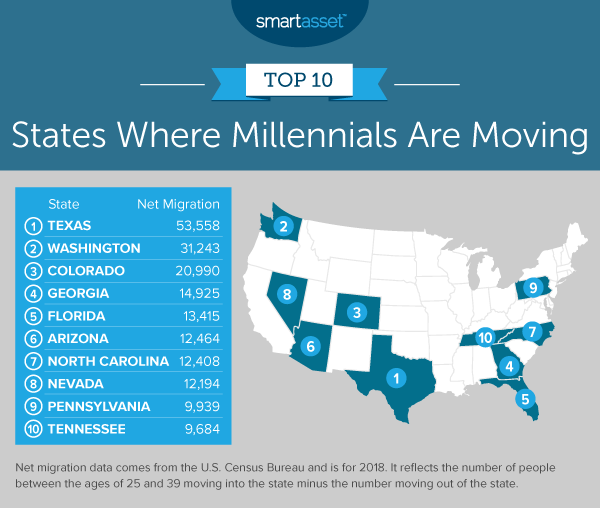 Regionally, the Northeast is the least popular geographic area for millennials to relocate. Pennsylvania is the only Northeastern state in our top 10, with a net migration of about 9,939 millennials. Meanwhile, the other two Middle Atlantic states – New York and New Jersey – saw large number of millennials moving out in recent years. In 2018, about 160,600 and 70,000 individuals between the ages of 25 and 39 moved out of New York and New Jersey, respectively.

Cities Where Millennials Are Moving 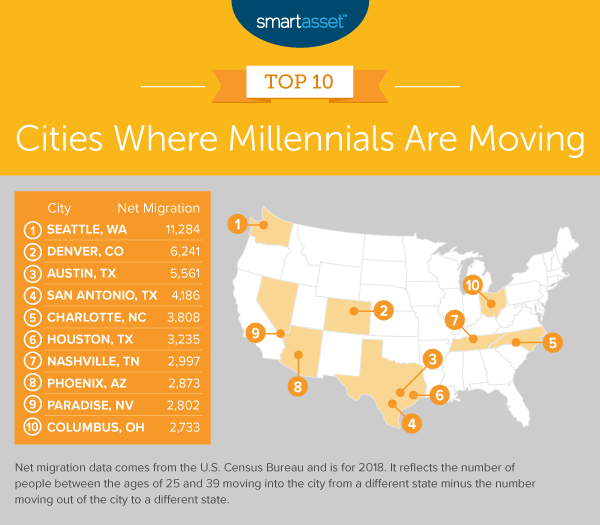 Seattle, Washington took the top spot this year, moving up from when it ranked second in last year’s edition of this study. In 2018, close to 27,000 millennials moved to Seattle from a different state. With about 15,700 millennials moving out of Seattle to a different state, there was a net migration of about 11,300 – which is 5,000 higher than the next city on the list.

Along with many seniors moving to Denver, Colorado, millennials have flocked to the city in recent years. In 2018, there was a net migration of about 6,200 individuals between the ages of 25 and 39. If you are thinking about moving to the city, take a look at our guide, 19 Things You Need to Know About Moving to Denver.

Millennials have flocked to Charlotte, North Carolina in recent years. In 2017, there was a net migration of more than 5,000 millennials to the city, according to our findings. Though falling slightly in 2018, the net migration number still ranks as the fifth-highest in our study, at 3,808.

The third Texas city in our top 10, Houston had a high number of millennials moving both into and out of the city in 2018. Specifically, 18,548 individuals between the ages of 25 and 39 moved into the city from a different state, while 15,313 individuals within that same age bracket moved out of the city.

If you recently moved to Houston and are looking for help managing your money, take a look at our list of the top financial advisors in the area here.

Ohio’s capital, Columbus, rounds out our list of the top 10 cities where millennials are moving, with a net migration of 2,733 individuals between the ages of 25 and 39 in 2018. Millennials may be interested in moving to Columbus because housing costs are generally more reasonable there than in many other large U.S. cities. In our 2019 study, Columbus, Ohio ranked as the ninth city where renters can most easily afford to live alone. 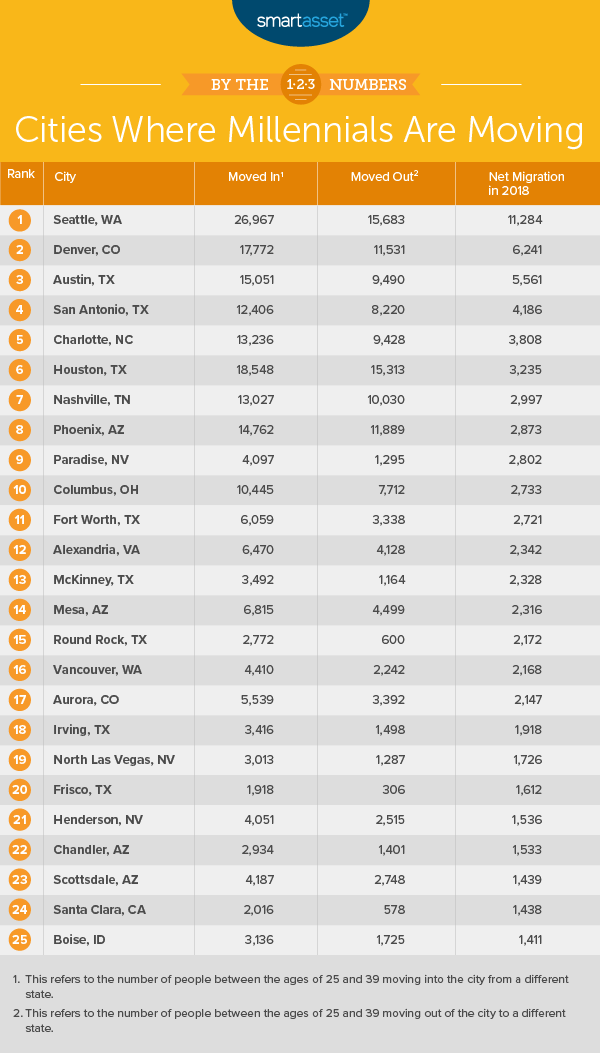 America’s largest city – New York, New York – ranks as the top city millennials are leaving. In 2018, about 48,600 millennials moved to the city, while more than 99,000 individuals between the same ages left.

The populous cities of Chicago, Illinois and Washington, D.C. follow behind New York City, though the magnitudes of net migrations of the cities are much smaller. In 2018, about 26,400 millennials moved into Chicago from a different state, while roughly 34,300 millennials moved out of the city to a different state. Meanwhile, in the nation’s capital, 19,866 millennials came to the city while more than 25,200 left the District of Columbia and moved elsewhere. 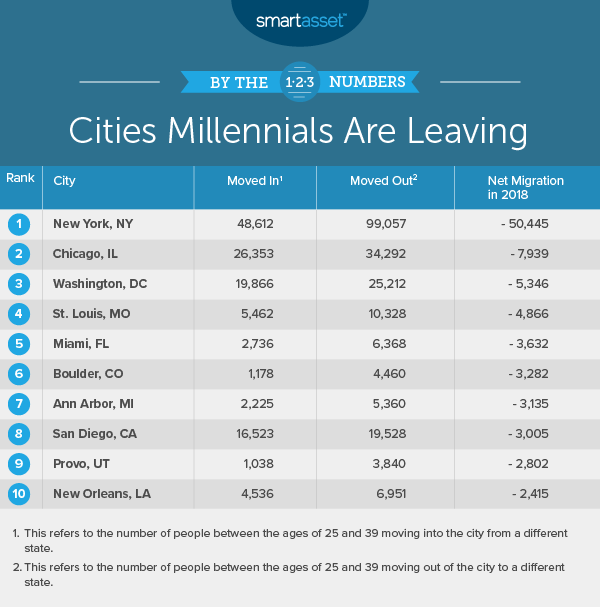 To find both the states and cities where millennials are moving, SmartAsset analyzed data from the Census Bureau’s 2018 1-year American Community Survey.

To determine the cities where millennials are moving, we considered 205 of the largest cities in the U.S. for which data was available. We found net migration during 2018 in each city by subtracting the number of people between the ages of 25 and 39 who moved out of the city to a different state from the number of people in the same age group who moved into the city from a different state. Cities with the highest net migration ranked the highest, and vice versa. We shifted the age range for millennials from 20 to 34 years old last year to 25 to 39 years old this year to account for the aging of this demographic.