Where Retirees Are Moving – 2020 Edition 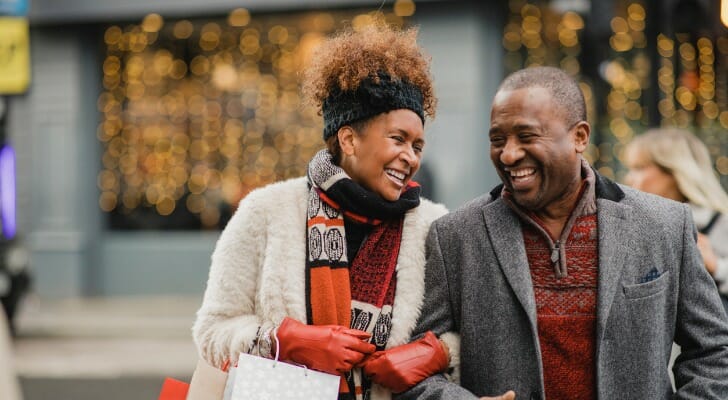 In 2018, roughly 930,000 people ages 60 and older moved across state lines, an increase of about 16% from five years earlier. Whatever reasons factor into their decisions, whether financial or personal, retirees must thoroughly consider the implications of moving, such as different tax rates and housing costs in new locales. That’s why speaking to an expert advisor might be a smart course of action before jumping in.

With an increasing number of retirees uprooting themselves and facing new financial realities, SmartAsset decided to look at some of the states and cities where retirees are moving to the most. Using data from the Census Bureau, we compared the number of people 60 years and older who moved into a state or city to the number of people who moved out. For details on our data sources and how we put all the information together to create our final rankings, check out our Data and Methodology section below.

This is SmartAsset’s fifth annual study on where retirees are moving. Read last year’s version here.

States Where Retirees Are Moving 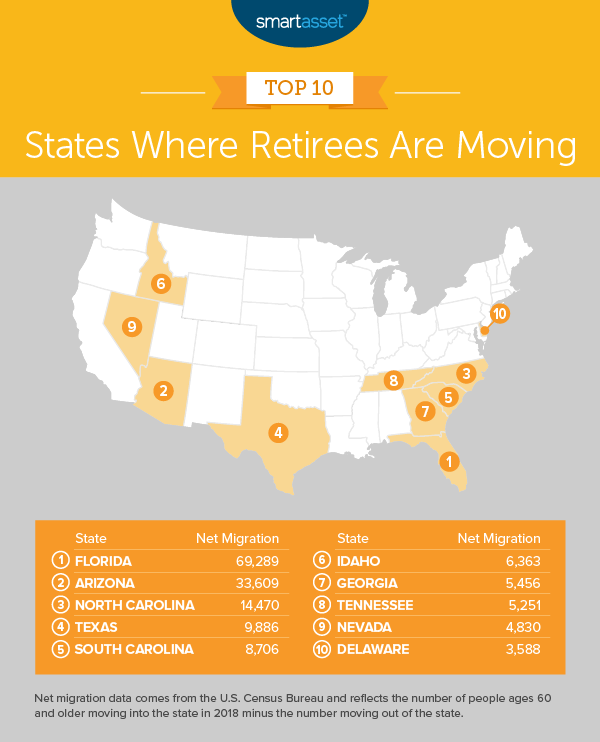 As noted above, Florida and Arizona take the top spots as the states where retirees are moving. Specifically, according to 2018 Census data, there was a net migration of about 70,000 and 34,000 people ages 60 and older to Florida and Arizona, respectively. In Florida, almost 150,000 seniors moved to the state during the year and about 80,000 moved out. In Arizona, about 59,000 seniors moved to the state and roughly 25,500 moved to a different state. The influx of seniors to Florida is unsurprising given that it is one of the most tax-friendly states for retirees in the U.S. Though Arizona does not tax Social Security retirement benefits, it does tax distributions from an IRA or a 401(k), making it only a moderately tax-friendly state for retirees.

Following Florida and Arizona, North Carolina takes the third spot, moving up slightly from last year’s study where it had the fourth-highest net migration of seniors. Using the most recent Census data in this year’s study, we found that a total of almost 15,000 seniors moved to the state in 2018.

The remaining states in our top 10 places where retirees are moving are Texas, South Carolina, Idaho, Georgia, Tennessee, Nevada and Delaware. Texas, South Carolina, Idaho, Tennessee and Delaware are all tax-friendly toward seniors. Georgia and Nevada are even more so: Nevada has no state income tax, and neither Georgia nor Nevada taxes Social Security benefits at the state level.

Cities Where Retirees Are Moving 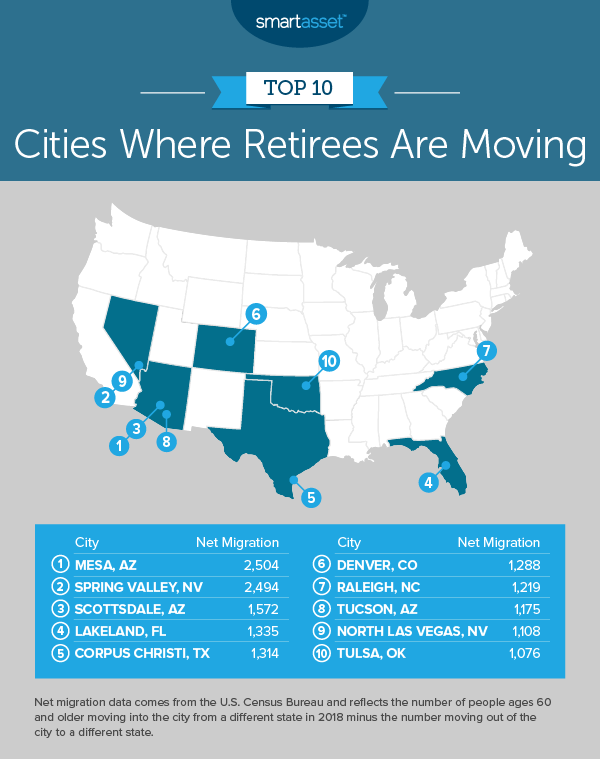 Mesa, Arizona is the No. 1 city in our study on where retirees are moving. Close to 4,000 seniors moved to Mesa in 2018 from a different state. With about 1,500 seniors moving out of Mesa to a different state, there was a net migration of about 2,500. Seniors new to the area may want to take a look at our list of the top financial advisors in Mesa.

Taking the No. 2 spot in our study on the cities where retirees are moving, Spring Valley, Nevada is located in Clark County and just west of Las Vegas. There was a very large influx of seniors to Spring Valley in 2018, specifically those 75 years and older. A total of 2,920 seniors aged 60 and older moved to the city over the course of the year, and of those, almost half, 1,544, were 75 years and older.

Scottsdale, Arizona has the largest senior population of all 205 cities in our study. According to 2018 Census data, 30.5% of the population was 60 years and older. The senior population is growing larger with more retirees moving to the city. A net of about 1,600 people ages 60 and older moved to Scottsdale in 2018.

East of Tampa, Lakeland, Florida had the fourth-greatest influx of retirees in 2018 of all 205 cities in our study. A total of 2,100 seniors 60 years and older moved to Lakeland from a state other than Florida that year, while only 765 moved out of the city to a different state.

The number of seniors between the ages of 65 and 69 significantly increased in Corpus Christi, Texas during 2018. About 700 seniors between those ages moved to the city from another state, while only about 10 seniors who were 65 to 69 years old moved out of the city. In total, there was a net migration of 1,314 into this city for people ages 60 and older.

Denver has been one of the fastest-growing cities in the U.S. in recent years. Part of that growth may be due to retirees’ decision to relocate there. In 2018, there was a net migration of 1,288 seniors. If you are thinking about moving there, take a look at our guide 19 Things You Need to Know About Moving to Denver.

In 2017, there was net outflow of seniors from Raleigh, North Carolina. Fewer than 1,000 seniors ages 60 and older moved to the city, while almost 1,200 left it. That trend reversed in 2018, with close to 1,900 seniors moving into the city from a different state and only about 700 leaving it.

According to our calculator, the cost of living in Tucson, Arizona is about 27% lower than the cost of living in New York, New York, the city that had the lowest net migration in 2018 with 14,000 seniors leaving the Big Apple for a different state. Beyond a relatively low cost of living, Tucson is known for its warm weather. The net number of retirees in the city increased by almost 1,200 over the course of 2018.

North Las Vegas, Nevada has the smallest senior population of any city in our top 10, at 15.9% in 2018. However, the city may be becoming a more popular spot for retirees. According to the latest annual data from the Census, a total of 1,508 people ages 60 and older moved to the city in 2018 while only 400 moved out of the city to a different state.

Tulsa, Oklahoma rounds out our list of the top cities where retirees are moving. In 2018, there was a net migration of 1,076 seniors to the city. A total of 1,845 seniors moved to the city from a different state, while only 769 left the city to move elsewhere. 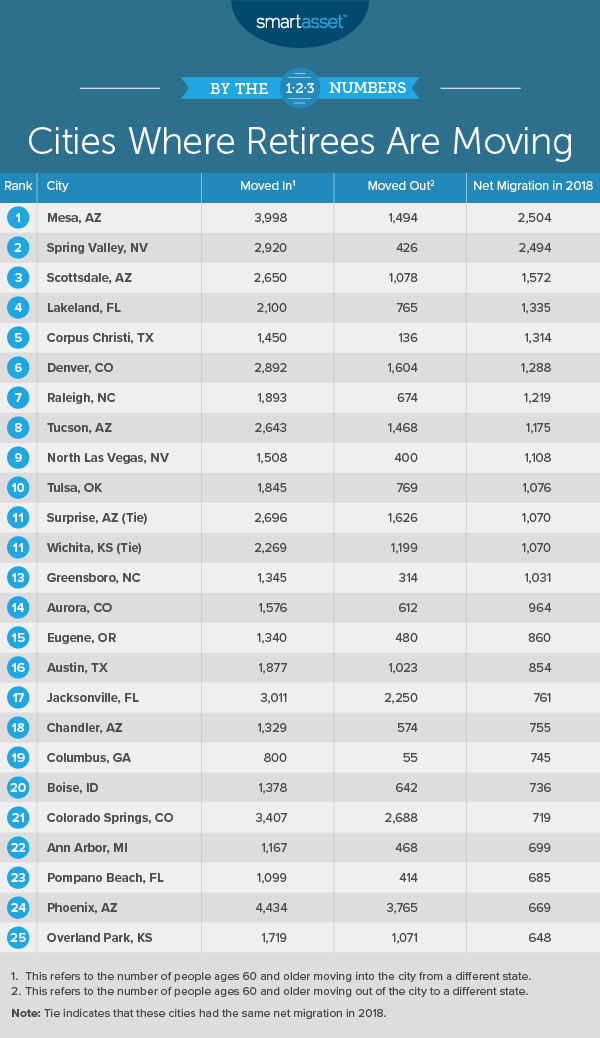 To find both the states and cities where retirees are moving, SmartAsset analyzed data from the Census Bureau’s 2018 1-year American Community Survey.

In determining the cities where retirees are moving, we considered 205 of the largest cities in the U.S. for which data was available. We found net migration during 2018 in each city by subtracting the number of people aged 60 and older who moved out of the city to a different state from the number of people in the same age group who moved to the city from a different state. Cities with the highest net migration ranked the highest, and vice versa.