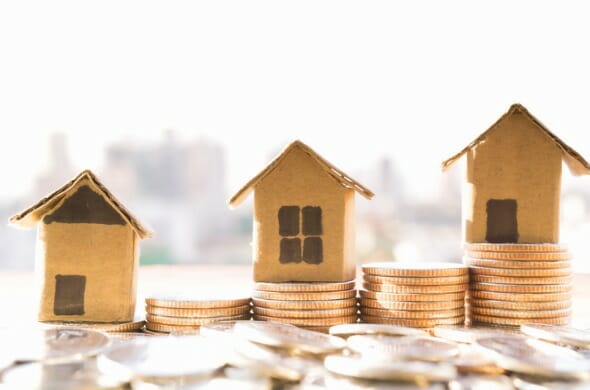 From 2012 to 2016, the median home in the U.S. increased in value by roughly $33,000, from $172,000 to $205,000. That is great news for all the homeowners in the country. However those home investment returns have not been spread uniformly across the country. Some cities are experiencing faster than average home value growth due to the number of new residents moving to a city outpacing the number of new homes. This puts upward pressure on home values and mortgage costs.

In order to rank the fastest rising housing markets in the U.S., we looked at three different factors. We looked at the 5-year difference between population growth and housing growth, 5-year home value change and 5-year median household income change. Check out our data and methodology below to see where we got our data and how we created our final index. 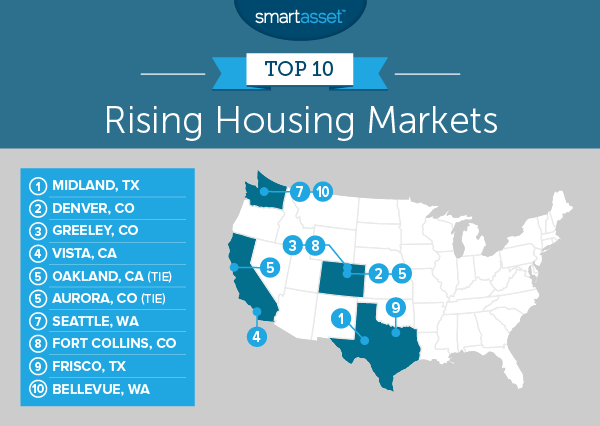 This is our second annual study of the top 10 rising housing markets. Check out the 2017 analysis here.

For the second year in a row, Midland takes the top spot as the fastest-rising housing market in the nation, according to Census Bureau data. In the past five years we estimate that the median home saw its value increase by 22%, the fourth-fastest home value increase in our data set.

Denver holds onto its second-place ranking in this study. From 2012 to 2016, home values in this city increased by 19%, the 12th-fastest increase the country. But home values are not rising in a vacuum. While home values were rising so were incomes. The average household in the Mile High City earns 15% more in 2016 than they did in 2012.

At the same time there is still upward pressure on housing prices due to sheer demand. From 2012 to 2016, the population growth outpaced housing stock growth by 4%.

There seems to be something of a housing stock shortage in Greeley, Colorado. According to our analysis, the population in this Colorado city grew by over 9% from 2012 to 2016. At the same time, the housing stock remained relatively constant. That leaves a lot of new people looking for housing without any new homes to buy. That has in part led to a 10% increase in median home values over the same time period.

Vista, California takes fourth. This city has above-average scores in all of our metrics. The leading factor for why Vista ranks so highly is its population. From 2012 to 2016 the number of people living in Vista grew by about 6%. Over that same time period, the total housing stock stayed constant. That means there are roughly 15,000 new residents in Vista with no new homes to move in to.

Oakland takes fifth thanks to rising incomes and rising populations. From 2012 to 2016, the number of new residents in Oakland outgrew the number of new homes by 6%. At the same time residents here are also able to afford more homes thanks to rising incomes. From 2012 to 2016 the median household income in this city grew by 12%, the 21st-fastest rate.

Another Colorado city comes in tied for fifth. From 2012 to 2016 Aurora saw a pretty sharp increase in residents without a subsequent housing boom to give them somewhere to live. Overall the number of new residents in the city outgrew the number of new homes by 7%. That means more demand for housing without any increase in the supply. Over that same period home values increased by an impressive 15%.

There is no doubt you need to be fairly well-off to afford living in Seattle. In a previous analysis we estimated you needed to earn $86,800 to afford fair market rent for the average two-bedroom apartment in Seattle. That number should continue to rise as more and more people, especially millennials, come to Seattle for jobs.

According to our data, the population of Seattle grew by 11% from 2012 to 2016 while the housing stock only grew by 5%. Seattle households will have no trouble bidding up the price of homes either. From 2012 to 2016, the median household income in this city grew by 17%, the fifth-highest rate in our study.

Bellevue, Washington wraps our top 10. This city scored in the top 20% of cities for all of our metrics. In particular the income growth in this city was impressive. From 2012 to 2016, the median household’s income grew by 14%. At the same time population outgrew new homes by 5% and the median home’s value grew by 12%. 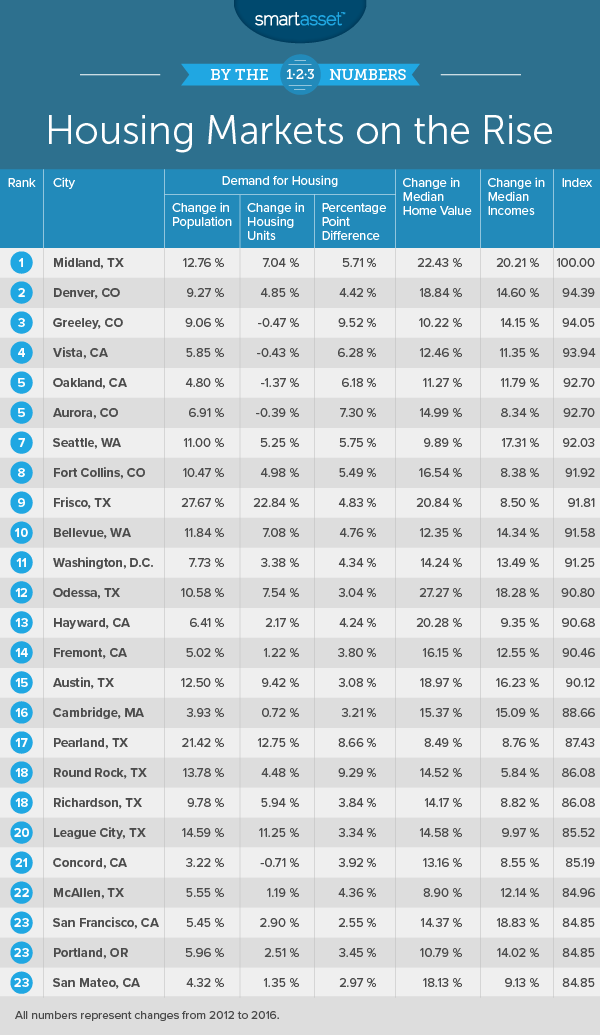 In order to rank the fastest-rising housing markets in the U.S., we looked at a total of 316 cities. Specifically, we looked at data for the following three factors: