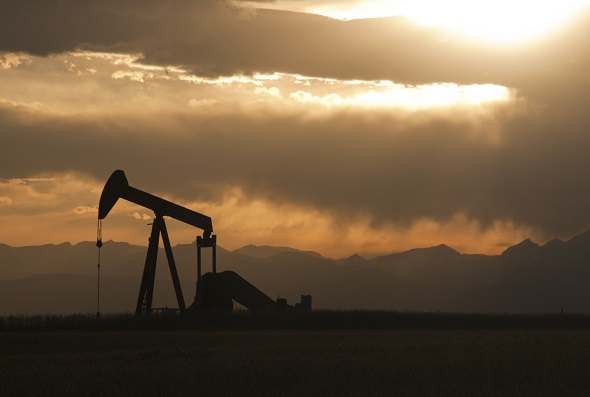 In the story of the great recession and the ensuing recovery, 2015 may be remembered as the year the economy finally returned to full strength. Unemployment is at its lowest rate in a decade. Housing prices are climbing steadily upwards. GDP growth is consistent if not robust. In some cities, however, the story of the past few years is not one of mere recovery but of substantial growth.

This is SmartAsset’s second annual study of the year’s top boomtowns. Read the 2016 analysis here.

To find the top ten boomtowns of 2015, SmartAsset looked at several metrics reflective of growth and prosperity for each of the 575 largest cities in the U.S. We considered the local unemployment rate for each city, as well as the regional rate of GDP growth and the rate of housing development. 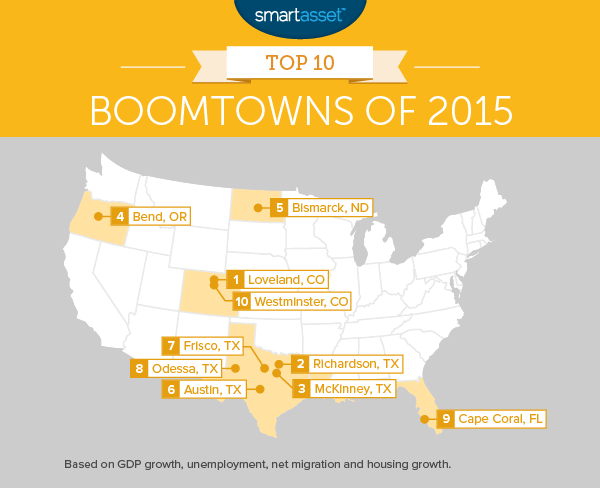 Located along the Rocky Mountain Front Range, north of Denver, Loveland has enjoyed explosive growth in recent years as a result of several regional trends. Increased oil production in nearby Weld County spurred GDP growth in the region, producing jobs and drawing residents to the Loveland area.

Likewise, growth in technology and science in nearby Denver and Boulder has buoyed the entire region, which has one of the hottest housing markets in the country.

The combined result has been a boom in the city of Loveland. The number of housing units in Loveland grew by 6.8% in 2014. Meanwhile, unemployment fell to just 2.7% in September of 2015, one of the lowest rates in the country.

Like many cities in the Dallas metro area, Richardson has seen an explosion in housing development in recent years. In 2014 alone, the number of housing units in the city increased by 15.3%, the fourth highest rate in the country. That not only means more space for new residents, but lots of jobs in construction and real estate.

Moving to Texas? Find out what your property taxes will be.

The population of McKinney has roughly tripled since the year 2000. While in many places this might lead to a shortage in housing (and a spike in prices), McKinney remains a relatively affordable place to live. The average price per square foot for real estate in McKinney is $110, according to Zillow. That’s lower than the national average of nearly $130 per square foot.

Everyone wants to live in Bend. Or at least, a lot of people do. According to U.S. Census Bureau data, the city’s net migration rate is 2.2%, the highest in the country. In 2014 alone, 3,600 more people moved to the Bend area than left it. There are plenty of potential reasons for that growth, among them the city’s strong economy and high quality of life.

After ranking second in our 2014 study, Bismarck is once again one of the country’s top boomtowns. While falling oil prices have slowed the North Dakota oil boom, the region’s economy has not suffered much. Oil production is still more than double what it was as recently as 2011 and unemployment is a fraction of the national average. In fact, the unemployment rate in Bismarck was just 1.9% as of September. That is the lowest unemployment rate of the 575 largest cities in the U.S.

The most-populous city to rank as a top 10 boomtown, Austin has been growing rapidly. The city’s net migration rate is 1.8%. Overall population growth has been even higher, close to 3% for the Austin metro area. That is the highest rate among the country’s largest 100 metros. If it continues, the area will add nearly 700,000 people over the next decade.

Fifteen years ago, the population of Frisco was less than 40,000. Today, it is more than 140,000. That represents an annual growth rate of more than 8.5%. What makes Frisco such a popular place to live? Its low unemployment rate – just 3.5% as of September – may be one factor. It is also one of the safest cities in America, an important factor for families who are considering relocation.

After falling steadily for at least thirty years, Texas oil production spiked beginning in 2010. While production has since leveled off, the state still produces more than 100 million barrels per month, as compared with just 34 million in January 2010.

Much of that increased production has taken place in the Permian Basin, just south of Odessa. The city has benefitted not just from the influx of jobs in oil extraction, but also in related fields such as equipment manufacturing and business services.

Known as the “Waterfront Wonderland,” the city of Cape Coral is home to more than 400 miles of waterfront property along the largest canal system of any city in the world. All that prime real estate may be one reason for the city’s explosive growth. The area’s net migration rate is 2%, second highest in the U.S.

Nonetheless, real estate in the city remains relatively affordable. According to Zillow, the median sales price in Cape Coral is $182,265 (as of July 2015). For those who would rather rent than to buy, the median rent is $850, according to the U.S. Census Bureau.

This Colorado city ranks in the top 10 on the strength of its high rate of housing growth and low unemployment. The city’s proximity to Denver as well as the Rocky Mountains make it an attractive place to live and the hot housing market in the Denver area has spurred development in Westminster. The number of housing units in the city increased by 6.6% in 2014. 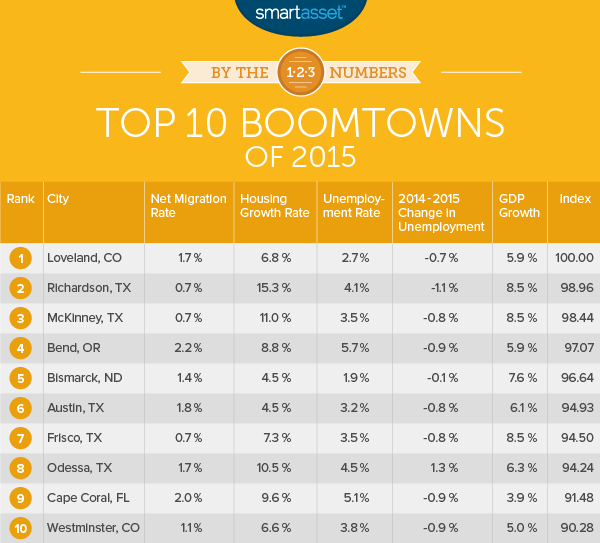 To find the top boomtowns of 2015, SmartAsset gathered and analyzed data on 575 of the largest cities in the United States. We considered the same four metrics as in last year’s study: GDP growth, net migration rate, unemployment rate and housing growth rate. Additionally, we looked at the annual change in the unemployment rate.

For each of those five factors, we calculated a score based on the number of standard deviations above or below the mean each city rated. We then totaled those scores, giving half weight to the two separate measures of unemployment (the current rate and the annual change) and full weight to the other three metrics.

That standard deviation total was the basis for our ranking. The city with the highest total ranked first and scored a 100 on the index, while cities with lower totals received lower scores accordingly.