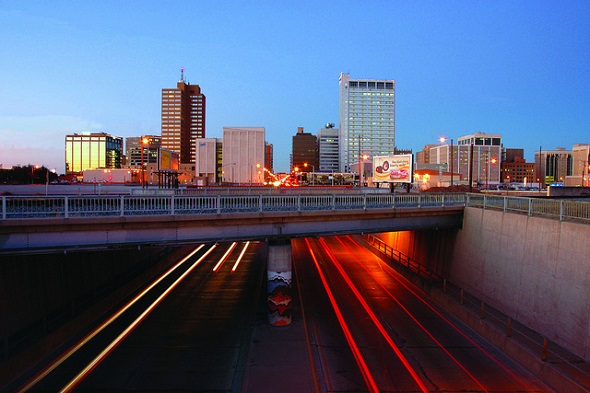 Historically, boomtowns have appeared where there was a discovery of mineral wealth—think the Texas Oil Boom or the California Gold Rush. In an era when cross-country travel was arduous and prosperity was less commonplace, only the sudden fortunes offered by gold, silver, copper and oil were enough to lure large numbers of migrants to a new place. When such a discovery was made, change occurred at a blinding pace. Rapid demographic and economic growth were matched by high levels of development, and it was not unusual to see cities double their population and output in a single year.

Today, the American economy is far more diversified and relocation is far less burdensome, which means that modern boomtowns can rise where there are no riches to be pulled from the ground. A strong tech sector, proximity to a wide variety of industries and even a vibrant cultural scene can all be contributing factors in a 21st century boom. Of course, as the results below demonstrate, it is still hard to beat a good old-fashioned oil rush.

To find the top American boomtowns, we collected 2013 and 2014 data on more than 550 of the largest cities in the country. Specifically, we looked at four economic factors that reflect the type of growth one would expect to see during a boom, as described below.

For each of these four factors, and for every city in our study, we applied a score from 0-10—so, for example, a city with an unemployment rate of 2% or lower scored a 10 for that factor, while a city with zero or negative GDP growth received no points for that factor. We gave equal weight to all four factors in our final tally, which was indexed to a 100-point scale based on the highest overall score. The results, below, are the top ten boomtowns of 2014. 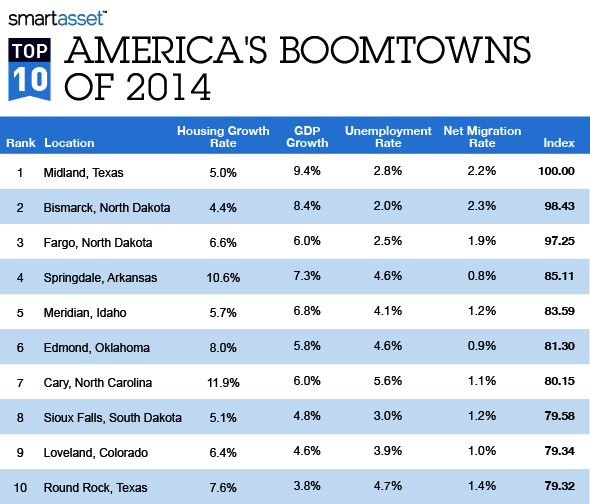 Since the discovery of oil in the Permian Basin in 1923, West Texas has been one of the world’s leading oil regions. Midland, the principal city in the region, has seen several booms over the past century, beginning with the oil rush that followed the Permian discovery in 1923. A second major oil discovery in the 1940s sparked another boom, as did the energy crisis of the 1970s, which pushed the price of crude oil to record highs.

Today, advancements in technology have lifted West Texas oil production to levels not seen since the 1980s, and Midland is once again booming. The city’s 2013 GDP growth rate of 9.4% was fourth highest of any city in our study, and its unemployment rate of 2.8% was third lowest. Even with the ongoing glut in the oil market, Midland’s strong growth promises to continue, thanks in part to the relatively low cost of oil production in the Permian Basin.

No major city has benefited more from that surge than Bismarck, the North Dakotan capital. It has the lowest unemployment rate of any city in the country—2%, far below the level at which most experts consider the economy to have reached full employment. That has proven an irresistible draw to many: in 2013 Bismarck’s net migration rate was 2.3%, highest in the country. While growth in the region’s oil production may slow in light of the recent plunge in oil prices, Bismarck appears to be in a strong economic position for 2015 and beyond.

As North Dakota’s largest city and one of the region’s economic hubs, Fargo has benefited from the nearby oil rush as well as a highly diversified economy. Recent years have seen massive population growth, as people from across the country have been attracted to region’s strong job market, good schools and affordable housing. Fargo had the eighth highest migration rate of any city we examined, with net migration accounting for nearly 2% of its total population in 2013.

Unlike the first three cities in our study, Springdale’s boom has nothing to do with oil. In fact, there doesn’t seem to be one reason for Springdale’s economic success; instead, a variety of factors have combined to create the conditions necessary for a boom. Ten miles down the road from Fayetteville and the University of Arkansas, Springdale had the 23rd highest housing growth rate of any city we examined and the 16th best GDP growth rate. For those seeking a warm climate and a new beginning, Springdale offers great prospects for relocation.

The westernmost city to make the top ten, Meridian has seen rapid housing and population growth over the past several years, thanks in large part to a strong regional economy. Anchored by nearby Boise, the region’s GDP grew at a rate of nearly 7% in 2013, among the 20 highest in the country. Much of that growth has occurred in Meridian, where the housing stock increased at an annual rate of 5.68% in 2013.

The city of Edmond’s official motto is “A Great Place to Grow” and it seems to be intent on proving that adage. Of the 550 cities we examined, it rated in the top 50 for both GDP and housing growth, and its net-migration rate was 56th overall.

North Carolina’s “research triangle” of Raleigh, Durham and Chapel Hill has long been a national economic powerhouse, with a highly skilled workforce drawing tech companies from around the world. As the third largest city in the region (behind Raleigh and Durham), Cary is often overlooked, but that may not be true for long. It is one of the most rapidly growing cities in the country; its 2013 housing growth rate of nearly 12% was 15th highest in the nation.

Located in South Dakota’s southeastern corner, not far from the Iowa and Minnesota borders, Sioux Falls has emerged in recent years as the region’s economic and cultural capital. Its 2014 unemployment rate of 3% was fourth lowest of any city in our study.

With a little over 70,000 residents, Loveland is the smallest city to make the top ten. In the eastern foothills of the Rocky Mountains, it benefits from its proximity to major universities in Denver, Boulder and Fort Collins. While access to the skilled workforces in these cities has been important, the engine of Loveland’s boom has been Loveland itself. The city has been improving infrastructure and offering incentives to business looking to relocate. As a result, it has an unemployment rate under 4%, as well as a net-migration rate among the 30 highest of the 550 cities in our analysis.

America’s tenth Boomtown may be in the petroleum-rich Lone Star State, but don’t be fooled: Round Rock’s boom has nothing to do with oil. Once thought of primarily as a suburb to nearby Austin, Round Rock’s reputation has changed over the past decade, and today it is recognized as one of the best places to live in the country. That recognition is paying dividends: in 2013, it had a net migration rate of 1.3%, 11th highest in the country.